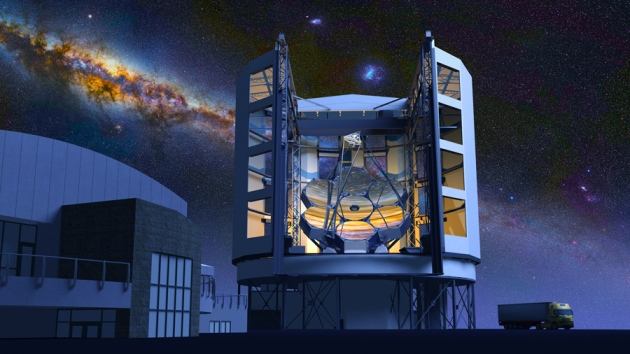 The proposed Giant Magellan Telescope in Chile is seeking to secure funding for its construction phase.

Astronomers in Brazil’s richest state are pushing for a stake in the Giant Magellan Telescope (GMT), one of three planned megatelescopes. The São Paulo Research Foundation (FAPESP) is evaluating a proposal that would see it invest US$40 million in the 25-metre facility, to be built at the Carnegie Institution for Science’s Las Campanas Observatory in Chile.

If Brazil finalizes joining the European Southern Observatory (ESO) as planned under a separate proposal, São Paulo state astronomers would have access to another mega­telescope, the 39-metre European Extremely Large Telescope (E-ELT), which ESO also plans to build in Chile. Brazil’s accession agreement to ESO, signed in 2010 by the then science minister Sergio Machado Rezende, would deliver €270 million (US$371 million) to the organization over a decade — almost one-third of the E-ELT’s cost. But Brazil’s legislative committees are still hunting for funds and its Congress has not ratified the agreement (see Nature 501, 13–14; 2013).

The strength of the astronomy department at the University of São Paulo alone helps to explain the state’s move to join the GMT, says Gary Sanders, project manager of the Thirty Meter Telescope, the third megatelescope in the pipeline, planned for Mauna Kea in Hawaii. “As an outsider, it does seem natural for me for the state of São Paulo to provide access to an extremely large telescope for that community,” he says.

The GMT project is managed by a consortium of institutions in the United States, Australia and South Korea. The telescope will study the skies with about six times the collecting power of the largest existing observatories, probing deeply into how stars and galaxies formed in the early Universe. On 19 February, the GMT board announced that a major milestone had been cleared when a panel of experts approved its design. Now that the $880-million telescope is technically ready for construction, it must secure its financial commitments. Cash is exactly what São Paulo could provide.

The state generates one-third of Brazil’s gross domestic product, and more than half of its scientific output. São Paulo produces more scientific articles than any South American country, aside from Brazil as a whole. Funding for the GMT would bypass complicated federal mechanisms and come directly from FAPESP, which is supported by 1% of state taxes.

The proposal before FAPESP would secure a 4% stake in the GMT, guaranteeing São Paulo’s researchers 4% of observation time each year, as well as representation on the consortium’s decision-making board. This would be a huge advantage for astronomers in the state — particularly those at smaller institutions, says Cassio Leandro Barbosa, an astronomer at the University of Paraíba Valley in São Paulo state.

Wendy Freedman, chair of the GMT board and director of the Carnegie Observatories, thinks that São Paulo and the GMT are “a good match”. The decision to join will now come down to FAPESP’s review of a November 2013 workshop between Brazilian astronomers and the GMT leadership, along with an evaluation of benefits for local industry, says Hernan Chaimovich, special aide to the scientific department at FAPESP. A decision is likely to be made by April, he says.

“Our reputation would drop off a cliff.”

According to Chaimovich, FAPESP is also in discussions with the Brazilian Ministry of Science and Technology about a federal contribution to the GMT, which would grant telescope access to investigators outside the state of São Paulo. If the ministry does contribute, ESO advocates could have cause for concern, because that might undercut interest in using the E-ELT, a major driver for Brazil to ratify its ESO membership.

For ESO director-general Tim de Zeeuw, one proposal does not necessarily exclude the other. FAPESP’s bid to join the GMT “is independent of the ratification of Brazil to ESO and is very different”, he says. Both megatelescopes are a decade or so away from completion, but being part of the ESO gives Brazilian astronomers access to existing observatories in Chile, such as the Atacama Large Millimeter/submilli­meter Array and the Very Large Telescope, he adds. “They are cutting-edge facilities available to the Brazilian community here and now.”

The ratification process formally began in February last year, but has stalled in Congress. De Zeeuw expects Brazil to confirm the agreement in the first half of 2014, but those familiar with the Brazilian system are less willing to make firm predictions in an election year. Beatriz Barbuy, head of the Astronomical Society of Brazil’s ESO committee, is hopeful that the process will wrap up this year. “We will see,” she says. “The next step is to find the budget.”

Further delays could hurt both ESO and Brazil. Under present rules, major construction contracts for the E-ELT cannot be awarded until Brazil’s funds are secure. The country’s growing standing in international science would also take a nose dive, says Barbosa, just as it seeks to join other global organizations, such as CERN, Europe’s particle-physics laboratory near Geneva, Switzerland. “Our reputation would drop off a cliff,” he says.