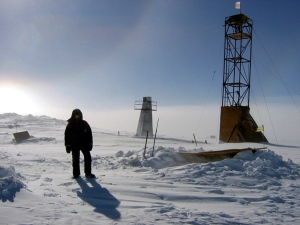 Scientists working in Antarctica think that they have found a new species of bacterium flourishing in Lake Vostok.

The Russian scientist who is leading an effort to analyse samples from a lake buried under almost 4 kilometres of Antarctic ice has hit back against criticism that an unknown species of bacterium discovered by the team was in fact contamination.

At an international scientific meeting in Moscow on 6 March, Sergey Bulat of the Petersburg Nuclear Physics Institute in Gatchina said that water from Lake Vostok contained a bacterium whose DNA was less than 86% similar to DNA from known bacterial species. But other researchers argue that announcement was premature because the bacterium might just have been a contaminant from the drilling fluid.

“They really need to stop playing around with frozen lake water bathed in kerosene and get a clean bulk water sample,” says John Priscu, a glaciologist at Montana State University in Bozeman who in January led a US expedition to Antarctica’s Lake Whillans, a comparatively small, shallow body of water beneath 800 metres of Antarctic ice.

But Bulat stands by the claim, and says that the team took steps to rule out potential contamination.

“We are very sure that what we have found is an unclassified native microbe,” Bulat says. “It seems to belong to a division of uncultured environmental bacteria that haven’t been determined yet.”

The Russian team broke through into the pristine lake in February 2012. At roughly the size of Lake Ontario, Vostok is by far the largest of the 300 or so subglacial lakes beneath Antarctica’s ice sheet. A preliminary analysis, reported last October, suggested that the upper layers of the lake were lifeless. But tests carried out since have revealed that this is not the case, says Bulat. Genetic analysis has revealed three variants of the bacterium that cannot be assigned to bacterial lineages described in global databases, he says.

The scientists have not yet established the mysterious microbe’s physiology and biochemistry, and they do not know how it might extract energy from its pitch-dark and nutrient-poor environment. More sophisticated tests, including whole-genome sequencing, will be required to answer these and other questions, says Bulat.

However, he says, the high level of contamination — the current samples contain as much drill fluid as lake water — and the meagre numbers of bacteria, just 167 cells per millilitre, mean that these analyses cannot yet be done. He hopes that samples from a 54-metre-long ‘fresh-frozen’ ice core drilled during the 2012–13 season and expected to arrive in St Petersburg in May will reveal more about the genetics of microbial life in Lake Vostok, he says.

Other researchers say that they would be surprised if Lake Vostok is totally devoid of life. The US team has already reported the presence of microbes in water and sediment samples retrieved from Lake Whillans. Those samples are currently being analysed in US labs. But many point out that about 90% of the bacteria on Earth remain uncultured and unsequenced, so finding bacterial DNA that doesn’t fully match that of well-classified taxa is not very surprising.

“It happens quite a lot,” says Brent Christner, a microbiologist at Louisiana State University in Baton Rouge and one of the researchers analysing the Lake Whillans samples.

The Russian team may have found differences of a few hundred base pairs to species in the databases, but this is “neither remarkable nor diagnostic” agrees David Pearce, a microbiologist with the British Antarctic Survey in Cambridge. Nonetheless, he says, the Russian findings — if they hold up — are “an encouraging and positive first step“.