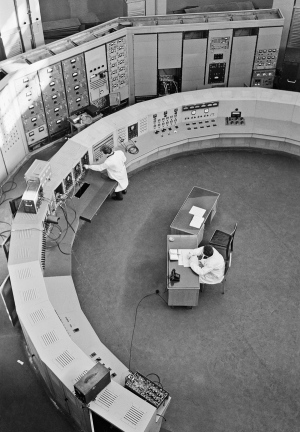 The Institute for Theoretical and Experimental Physics in Moscow has been made part of Russia's Kurchatov Institute.

Physicists at one of Russia's top research institutes say that policies being imposed by the government are hindering their work and have mounted an Internet campaign to recruit help from colleagues elsewhere.

In a bid to bring government-funded fundamental physics research under a single organization, the Russian government has moved the Institute for Theoretical and Experimental Physics (ITEP) in Moscow, along with two other institutions, out of the state-owned nuclear corporation, Rosatom, and into its newly expanded Kurchatov Institute.

"In principle, the idea is not bad — fundamental science should be supported by government" rather than by a state-run corporation, says Pavel Pakhlov, an experimental physicist at the institute who is helping to coordinate the protest. But, Pakhlov says, strict new budgetary and security rules mean that "ITEP will be killed if some reasonable solution cannot be found in the next months".

The protestors say that the new administration began imposing impossible restrictions on scientists, many of whom work closely with researchers in Switzerland, Japan and the United States, almost immediately after the move was completed on 1 January.

Pakhlov's work, for instance, depends on use of the Belle particle detector in Japan, but when he sought to make a routine trip there, his request fell afoul of ITEP's new leadership. "The administration wants to know why we need to go to Japan," he says. "It really has no idea what is done here at ITEP from a scientific point of view."

Furthermore, new security procedures have made it nearly impossible for foreign scientists to visit, says Andrei Rostovtsev, another protestor based at ITEP. When an American colleague tried to visit the institute, "he was not even allowed to come to the gates", Rostovtsev says. And other researchers have had to find off-site locations to meet colleagues from abroad.

Alexander Gorsky, who studies quantum mechanics at the institute, says that that it's not just experimentalists running into trouble. He says that he received a letter from administrators at the Kurchatov Institute telling him that ITEP theorists should focus on nuclear medicine and ion-beam physics. This "administrative ignorance", as Gorsky calls it, fails to recognize the lab's world-class research into areas such as fundamental particle physics and string theory.

Pakhlov says that much of their frustration stems from uncertainty surrounding the arrangements. Researchers have not been given clear rules for travel or for how to vet visiting researchers. Even their salaries remain in limbo, amid confusion over a new pay system.

Neither Yuri Kozlov, ITEP's director, nor the press centre at the Kurchatov Institute responded to Nature's queries by deadline. However, several of ITEP's alumni say they hope that the tense situation can be salvaged. Andrei Golutvin, a particle physicist at Imperial College in London who worked at ITEP in the 1980s says that the consolidation is the "only possible step" for the institute, because it no longer meets the needs of Rosatom. The shift will inevitably be painful for ITEP's researchers, he says, but "if things will go right, then I think there is a real possibility to get resources".

Boris Sharkov, an ITEP alumnus who is now scientific director of the Facility for Antiproton and Ion Research being built in Darmstadt, Germany, agrees, but points out that the institute must also keep its international reputation. "ITEP has to keep its open character to the international community," he says. Losing the institute in this transition "would be a very big pity”.