The Phobos-Grunt spacecraft, which was meant to travel to a moon of Mars and back, has crashed back to Earth. The ambitious but doomed probe almost certainly splashed into the southern Pacific Ocean on 15 January, between 16:59 and 17:47 gmt.

The exact time and location of the re-entry is still unclear: the craft was travelling on an unknown trajectory at around 29,000 kilometres per hour, and the most advanced tracking equipment belongs to top-secret US military satellites that are not accessible to astronomers. 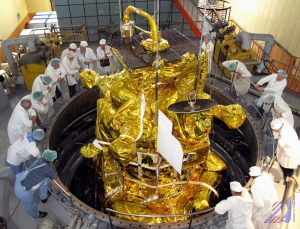 The Phobos-Grunt probe, seen here before launch, came back to Earth on 15 January. Its exact whereabouts are still unknown.

Current estimates are based on predictions of the trajectory, and it will take time to verify them. “This truly is rocket science, not something that is fairly easy to do. It is not like on TV,” says Marco Langbroek, an archaeologist and amateur satellite tracker at the Free University of Amsterdam. “The southern Pacific is not a good spot to keep track of objects. It is too large and empty,” he adds.

The probe is expected to have broken up, and only about 200 kilograms of fragments would have made it through Earth’s atmosphere, says Heiner Klinkrad, head of the Space Debris Office of the European Space Agency (ESA) in Darmstadt, Germany, which coordinated international efforts to track the re-entry. The fragments are probably scattered across an area of thousands of square kilometres of ocean, he says.

Phobos-Grunt would still have had 11 tonnes of unused, toxic fuel on board, but this would not have made the journey back to Earth. “Analyses point to a breaking up of the aluminium tanks at over 100 kilometres altitude,” explains Klinkrad.

The probe launched on 8 November last year. It was heading for Mars’s moon Phobos, to scoop up a soil sample and return it to Earth; the craft's name is Russian for Phobos-Soil. Along the way, it was to deliver a small Chinese satellite into orbit around Mars.

But something went wrong. The boosters that should have sent the rocket out of Earth's orbit didn’t fire, leaving the craft to tumble back to Earth. The reasons for the mishap may never be known. Roald Sagdeev, former head of the Space Research Institute of the Russian Academy of Sciences (IKI) in Moscow, and now a physicist at the University of Maryland in College Park, says that there are two possibilities: either the on-board computer didn’t give the command correctly, which suggests a mistake in the software; or the engine didn’t work properly. Both of these mistakes could be the result of routine errors, says Sagdeev.

He hopes that the reputation of the Russian space-science programme will not be damaged. The mistakes were not scientific, but the fault of the space industry, he says. Furthermore, the project, which began in 1999, suffered because many of its original workers have retired, and, says Sagdeev, the younger replacements weren’t properly trained.

But Jonathan McDowell, an astronomer at the Harvard–Smithsonian Center for Astrophysics in Cambridge, Massachusetts, says that the entire project aimed too high. “We already know the main reason why the mission failed: it wasn’t managed properly,” he says. “It was hugely overambitious given the resources available.”

In 1996, a previous Russian mission to the red planet — dubbed Mars 96 — also failed just after launch. “They need to do a few small projects to get themselves some practice,” suggests McDowell.

The failure of Phobos-Grunt could lead to major changes in Russia’s space industry, says Sagdeev. He would like a return to the tight military-level technical control of Soviet times. “I remember it was very tough,” he says.

The scientific yearning to reach Phobos remains. “The crash of the spacecraft is a very big tragedy for the whole science community,” says Alexander Zakharov, Phobos-Grunt’s project scientist at the IKI. Zakharov is hopeful that Roscosmos, the Russian space agency, will agree to another mission to the Martian moon. “With samples from this moon we can get information about the origin of the Solar System,” says Zakharov.

In the meantime, Russian space scientists are in discussions with ESA and NASA to join the ExoMars project, which hopes to send missions to Mars in 2016 and 2018.