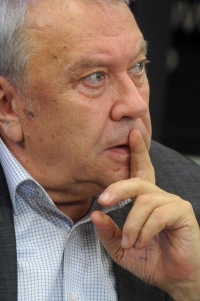 Vladimir Fortov is the leading candidate to be president of the Russian Academy of Sciences.

From czarist times to the days of perestroika, the Russian Academy of Sciences (RAS) was the pillar of the nation’s scholarship, boasting the country’s best scientists as members. The dramatic decline in science spending after the break-up of the Soviet Union ended the academy’s days of plenty, and although funding has rallied in recent years, those roubles have increasingly gone to other research centres.

Now awaiting the first new academy president in more than two decades, Russian scientists hope that the leadership will revive the struggling institution and bring about reform they feel is long overdue.

Critics say that the RAS, which employs some 45,000 scientists at 436 institutes across Russia, is burdened by a host of unproductive ageing scientists awaiting retirement and by many pursuing research of dubious value (see Nature 449, 524–527; 2007). They say that current president Yuri Osipov, a mathematician who has presided over the RAS since 1991, has failed to clear out dead wood and take other steps to prevent the academy, which was founded in 1724 by Peter the Great, from declining into insignificance.

On 29 May, the academy’s general assembly of more than 1,000 full and corresponding members will vote in a secret ballot on its future head. Osipov, 76, said earlier this month that he will not run for a fifth term. “I’m tired,” he told the Russian news service Pravda.ru . It is time for a new person with “new views and fresh energy” to take over.

How new the views and how fresh the energy will depend on who wins on 29 May. The favoured contender, according to sources close to the academy, is 67-year-old plasma physicist Vladimir Fortov, former deputy prime minister and former science minister in the Russian government. His election manifesto includes a raft of proposals for the RAS — to cut red tape, to improve efficiency, to regularly review the performance of institutes and scientists, and to base funding on merit. “Fortov is no doubt determined to start some reform, however timidly,” says Konstantin Severinov, a molecular biologist at the recently inaugurated Skolkovo Institute of Science and Technology near Moscow, and a professor at Rutgers University in Piscataway, New Jersey.

Fortov’s chief opponent, Zhores Alferov, is considered less likely to modernize the academy. The 83-year-old physicist and long-time director of the respected Ioffe Physico-Technical Institute in St Petersburg shared the Nobel Prize in Physics in 2000 for his ground-breaking work on semiconductor heterostructures. He is also a member of the communist faction in the Duma, the Russian parliament, and a stalwart champion of Soviet ideals. “Alferov is a scientist of the highest repute — but his views are not always forward-looking,” says Severinov.

At a meeting in April of the Council for Science and Education, a presidential advisory body chaired by Vladimir Putin, Alferov agreed with academicians who reject the use of bibliometric indicators — such as numbers of research papers and the impact factors of the journals in which they are published — for measuring scientific performance. He agreed that such assessments would encourage Russian scientists to publish their best work in foreign high-impact journals rather than in Russian ones. 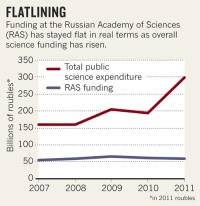 Such nationalistic views threaten to cement the isolation of Russian science further, says Mikhail Feigel’man, deputy director of research at the academy’s Landau Institute for Theoretical Physics near Moscow. (Feigel’man himself is not a member of the academy and will not be voting on 29 May.) “Our ties with international science are all but eliminated,” he says. “We’re caught in a system that was constructed in Soviet times when academic exchange was not considered important. But now it is.”

Travel grants are almost unavailable to RAS researchers, and foreign scientists or students are absent at many academy institutes. “Anyone interested in working with us, or giving talks at our institute, I have to tell that it is not possible unless they come with their own money,” says Feigel’man. Meanwhile, low salaries, lack of grant money and poor career prospects are deterring Russian talent from pursuing science at home, he says. “Our own people leave Russia as fast as they can.”

The Russian government itself seems to view the RAS as increasingly irrelevant. The academy’s budget, around 60 billion roubles (US$1.9 billion) per year, has stagnated since 2000, even as overall science spending in Russia has doubled (see ‘Flatlining’). The government is funnelling the new money into university research and ventures such as the Skolkovo, a new science complex that will focus on biotechnology and information technology, among other disciplines, in partnership with international companies. German engineering and electronics giant Siemens, based in Munich, and Finnish mobile-phone company Nokia, in Helsinki, have already signed up to participate.

Science minister Dmitri Livanov has said that he expects a thorough overhaul of the academy and that productivity should become a funding prerequisite for RAS institutes and scientists. “There are some researchers who fully meet this standard,” Livanov said in a 2012 interview. “Those who do not work we will have to call something different.”