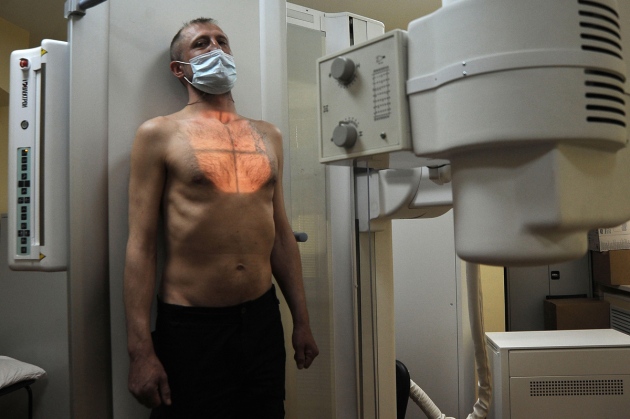 A patient undergoing chest X-rays at an anti-tubercular clinic in St. Petersburg.

Bacterial 'superbugs' are getting ever more potent. Tuberculosis (TB) strains in Russia carry mutations that not only make them resistant to antibiotics but also help them to spread more effectively, according to an analysis of 1,000 genomes from different TB isolates — one of the largest whole-genome study of a single bacterial species so far.

TB, which is caused by the bacterium Mycobacterium tuberculosis, exploded in Russia and other former Soviet nations in the early 1990s, after the collapse of the Soviet Union and its health system. The incomplete antibiotic regimens some patients received, meanwhile, sparked rampant drug resistance. But the latest study of TB cases in Russia, published today in Nature Genetics1, indicates that such ‘programmatic’ failures may not be the only explanation for the rise of drug-resistant TB in the region — biological factors also play a big part.

As part of a long-standing effort to study the rampant drug-resistant TB in Samara, a region of Russia about 1,000 kilometres southeast of Moscow, researchers collected TB isolates from 2,348 patients and sequenced the entire genomes of 1,000 of them. This enabled the team to identify previously unknown mutations linked to antibiotic resistance, as well as 'compensatory mutations' that improve the ability of drug-resistant TB to spread.

Nearly half of the TB isolates were multi-drug resistant, which means that they were impervious to the two common first-line antibiotics that cure most TB infections, while 16% of these isolates also harboured mutations that made them impervious to ‘second-line’ drugs. These infections are more expensive to treat, and patients who receive ineffective drugs are more likely to spread TB.

“It certainly adds an extra layer of worry, because one had assumed if you could solve programmatic weaknesses, you would solve the problem of the drug-resistant TB,” says the study's lead author Francis Drobniewski, a microbiologist at Queen Mary University of London. “But this does seem to be a biological problem as well.”

“Although we know the general story of TB drug resistance in Russia, these new findings are still shocking,” says Christopher Dye, an epidemiologist at the World Health Organization in Geneva, Switzerland. "Truly scary," he adds.

Antibiotics block essential functions in bacteria, such as making proteins or building cell walls. Mutations in the genes involved in these duties can lead to antibiotic resistance, but they also tend to make bacteria divide more slowly. But laboratory experiments have shown that bacteria can develop compensatory mutations that restore the pathogen's ability to divide quickly. Drobniewski’s team found such mutations in more than 400 isolates that were resistant to the first-line antibiotic rifampicin, and the authors suggest that the mutations might overcome the growth-slowing effect of evolving resistance.

“The worst scenario is that the organisms are developing resistance, compensating for it, and evolving into something that’s new and different, that’s much less treatable,” says Megan Murray, an epidemiologist at the Harvard School of Public Health in Boston, Massachusetts. In a 2013 study2, her team found both widespread drug resistance and compensatory mutations in their analysis of 123 TB genomes from around the world.

But even if biology is a major driver of Russia’s drug-resistant TB epidemic, public-health officials can still beat it back, says Dye. “My bet is that, if the local control programme correctly identifies strains carried by each patient, and treats them with the most effective drug regimens, then the number of resistant cases will fall,” he says. “That’s what we’ve seen in Estonia, Hong Kong, the USA and elsewhere. I doubt that Russia is different.”

A previous version of this article stated that the study by Casali et al. was largest whole-genome study of a single bacterial species so far; however there have been larger studies of this type3.