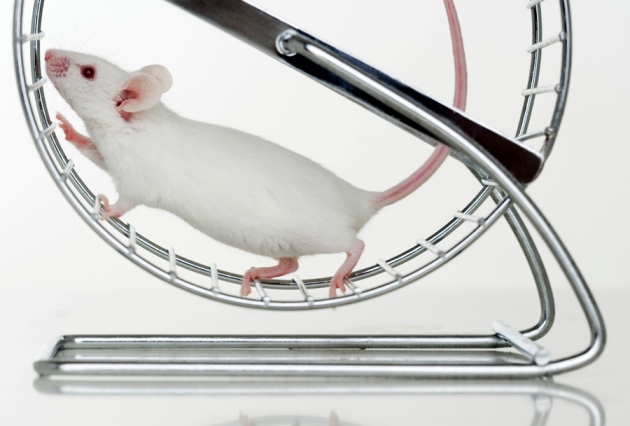 Mice with 'lazy eye', a partial blindness caused by visual deprivation early in life, improved faster if they were exposed to visual stimuli while running on a treadmill.

Running helps mice to recover from a type of blindness caused by sensory deprivation early in life, researchers report. The study, published on 26 June in eLife1, also illuminates processes underlying the brain’s ability to rewire itself in response to experience — a phenomenon known as plasticity, which neuroscientists believe is the basis of learning.

More than 50 years ago, neurophysiologists David Hubel and Torsten Wiesel cracked the 'code' used to send information from the eyes to the brain. They also showed that the visual cortex develops properly only if it receives input from both eyes early in life. If one eye is deprived of sight during this ‘critical period’, the result is amblyopia, or ‘lazy eye’, a state of near blindness. This can happen to someone born with a droopy eyelid, cataract or other defect not corrected in time. If the eye is opened in adulthood, recovery can be slow and incomplete.

In 2010, neuroscientists Christopher Niell and Michael Stryker, both at the University of California, San Francisco (UCSF), showed that running more than doubled the response of mice's visual cortex neurons to visual stimulation2 (see 'Neuroscience: Through the eyes of a mouse'). Stryker says that it is probably more important, and taxing, to keep track of the environment when navigating it at speed, and that lower responsiveness at rest may have evolved to conserve energy in less-demanding situations. “It makes sense to put the visual system in a high-gain state when you’re moving through the environment, because vision tells you about far away things, whereas touch only tells you about things that are close,” he says.

It is generally assumed that activity stimulates plasticity (see 'Neurodevelopment: Unlocking the brain'), so Stryker and his colleague Megumi Kaneko, also a neuroscientist at UCSF, wondered whether running might influence the plasticity of the visual cortex. They induced amblyopia in mice by suturing one eye shut for several months, during and after the critical period of visual development. They then re-opened the mice’s eyes and divided them into two groups. Mice in one group were shown a ‘noisy’ visual pattern while running on a treadmill for four hours a day for three weeks. The pattern was chosen to activate nearly all the cells in the mice’s primary visual cortex. The researchers recorded the mice’s brain activity using intrinsic signal imaging, a method similar to functional magnetic resonance.

After a week these mice showed more responsiveness in the part of the cortex corresponding to the eye that had been closed. After two weeks, responses were comparable to those of normal mice that had never been visually deprived. The other group, housed in cages and without extra visual stimulation, had a much slower response to their newly reopened eye and never reached normal response levels.

Further experiments revealed that neither running nor visual stimulation alone had this effect. Recovery was also specific to the stimulus. Mice viewing the noise pattern did not show improved responses to a pattern of drifting bars, and vice versa, suggesting that only the visual circuits activated during running recover.

“What is amazing is the robustness of this phenomenon,” says Massimo Scanziani, a neurobiologist at the University of California, San Diego. “It’s powerful and highly reproducible, which is ideal for studying the mechanism.”

Stryker and his colleagues do not yet know whether their findings apply to humans, but they plan further work to find out.