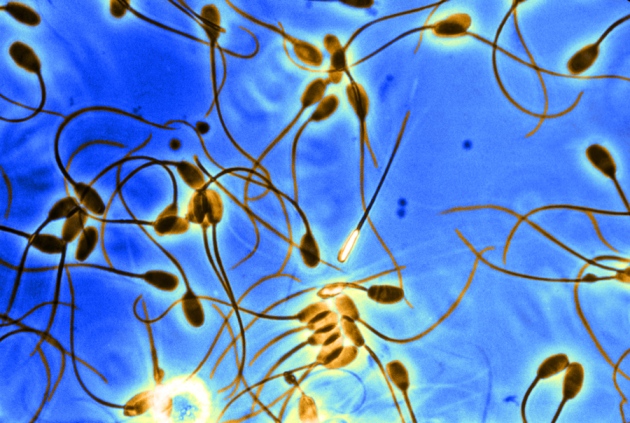 Some hope that sperm cells could one day be derived from the skin cells of a man who is otherwise sterile — and that a similar process cold produce viable egg cells from a sterile woman's body.

Israeli and UK researchers have created human sperm and egg precursor cells in a dish, starting from a person's skin cells. The achievement is a small step towards a treatment for infertility, although one that could face significant controversy and regulatory hurdles.

The experiment, reported online in Cell on 24 December1, recreates in humans parts of a procedure first developed in mice, in which cells called induced pluripotent stem (iPS) cells — ‘reprogrammed’ cells that can differentiate into almost any cell type — are used to create sperm or eggs that are subsequently manipulated to produce live births by in vitro fertilization.

In 2012, stem-cell biologist Mitinori Saitou of Kyoto University in Japan and his collaborators created the first artificial primordial germ cells (PGCs)2. These are specialized cells that emerge during embryonic development and later give rise to sperm or eggs. Saitou made them in a dish, starting with skin cells reprogrammed to an embryonic-like state through iPS-cell technology (see 'Stem cells: Egg engineers'). They also were able to achieve the same result starting with embryonic stem cells.

Efforts to engineer similarly functional gametes in humans have produced PGC-like cells, but with such a low efficiency — success rate of turning stem cells into gametes — that it was difficult for others to expand on the work. . Previous efforts also required the introduction of genes that would render the cells unusable in the clinic.

Now a team led by Azim Surani of the University of Cambridge, UK, and Jacob Hanna of the Weizmann Institute of Science in Rehovot, Israel, has replicated the in vitro portion — the “first half”, says Hanna — of Saitou’s efforts in humans.

But Hanna realized that those differences could be overcome by tweaking the cells, as he and his collaborators reported in 20133. He and his team developed a way of making human stem cells that were naive like those of mice. “The first time we used those cells with the Saitou protocol — boom! We got PGCs with high efficiency,” he says.

Working together, Surani and Hanna were able to use embryonic stem cells and iPS cells, from both males and females, to make gamete precursor cells with 25–40% efficiency

“It is exciting that the Surani and Hanna labs have found a way to generate progenitor germline cells with the highest efficiency ever reported,” says Amander Clark, a reproductive-biology expert at the University of California, Los Angeles.

The cells have many of the hallmarks of primordial germ cells. In particular, their ‘epigenetic’ pattern — chemical modifications to the chromosomes that affect gene expression — was similar to those of primordial germ cells. The team compared protein markers in their artificial PGCs with those in real PGCs collected from aborted fetuses, and found them to be very similar.

“They are as similar to human PGCs as Saitou’s [artificial] PGCs are to real mouse PGCs,” says Hanna.

Saitou says mechanistic insights offered by the paper will probably boost efforts to further understand, and control, this process. In particular, in humans, a protein called SOX17 seems to have a key role that in mice is played by a different protein, called Sox2.

Saitou, who is also working on developing human PGCs in a dish, calls it an “interesting finding”, and says that, overall, the process for creating such cells “is much more clearly defined compared to previous, ambiguous work, and therefore this will be a good foundation for further investigations”. Clark agrees: “It is the special mechanistic insight into human germline development that makes this paper unique,” she says.

In mice, the next step is to introduce the engineered PGCs into testes or ovaries, to complete the ‘second half’ of the Saitou process, their development into functional sperm or eggs.

But Hanna says that he and his collaborators are “not ready to take that plunge” in humans, and others agree that there are still too many unknowns to introduce the artificial PGCs into humans.

He says that they are also considering injecting the human artificial PGCs into the testes or ovaries of mice and other animals, or to try the whole experiment in non-human primates. He says that ongoing efforts by Saitou and others, to complete the process of mouse sperm and egg development in vitro, could lead to a recipe that can be tweaked for humans.

“I’m still gathering my thoughts. We will see after the paper is published what the community will think,” Hanna says.

Clark says that regulators should make way for the human experiments that will be necessary to move the technology to the clinic and potentially enable some sterile men and women to conceive. In the United States, for example, law forbids federal funding of the creation of human embryos for research purposes, something that would be necessary to test the new technology. The restrictions “need to be lifted and replaced with universal guidelines on how to do this research ethically and safely”, she says.

In principle, the process could even be used to derive egg cells from a man's body. These could be fertilized in vitro by another man's sperm and the resulting embryo could then be implanted in a surrogate mother — enabling the two men to have a biological child together. But the technical hurdles would be formidable: in particular, men do not have ovaries in which the precursor cells could be allowed to mature into eggs. Moreover, the idea would be guaranteed to face controversy.

"It is really important to emphasize that while this scenario might be technically possible and feasible, it is remote at this stage and many challenges need to be overcome," Hanna says. Enabling two women to have biological children together seems even more remote, the authors add, because only men have the Y chromosome, which is essential for the production of sperm cells.