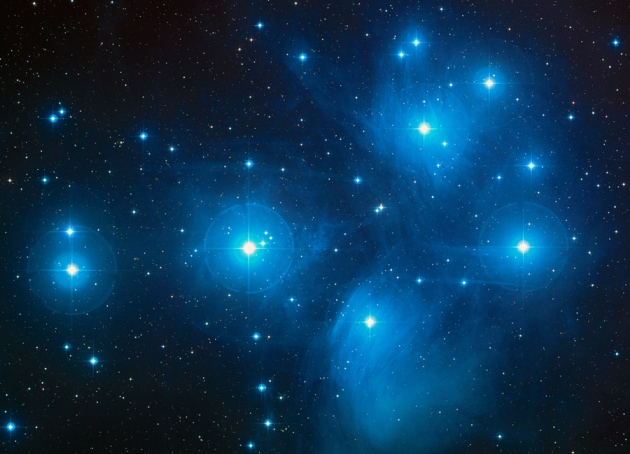 The Pleiades, also known as the Seven Sisters, in a Hubble Space Telescope image.

The most precise measurement yet of the distance to the Pleiades star cluster is reviving a dispute that has split the astronomy community largely down a trans-Atlantic divide for the past 17 years.

The latest result, from a US team using a worldwide network of radio telescopes, is in good agreement with more than a dozen previous measurements to the Pleiades, made using multiple techniques. But it stands in sharp contrast to a figure from the Hipparcos satellite of the European Space Agency (ESA).

The authors of the latest study, published today in Science1, say they believe that the Hipparcos measurement is an error, and worry that the same problem could affect its successor mission, ESA's Gaia space telescope, which began taking data last month. The alternative is even less appealing: if Hipparcos is right, then accepted theories of the physics of stars could require some mending.

Using radio telescopes including the Very Long Baseline Array, the US team exploited the physics of electromagnetic waves to operate the instruments as one giant, precise, Earth-sized telescope. They calculated the distance to the Pleiades cluster by watching five of its stars (two of them forming a binary system) over a period of 18 months. They calculated the cluster’s distance by watching four of its stars appear to shift ever-so-slightly in the sky as the Earth orbited the Sun, in a modern twist to the centuries-old parallax method. The less those stars shifted relative to the background — defined by a galaxy so distant it doesn’t appear to move at all — the farther away they were.

The team got a result of 136.2 parsecs (444.2 light years), concurring with nearly all previous estimates. But the Hipparcos result puts the cluster 16 parsecs closer to Earth. The uncertainties of both measurements are less than two parsecs.

Much rides on the debate. The Pleiades cluster is made of young stars, only 100 million years old, and visible to the naked eye in the Taurus constellation. Many of the consensus measurements were made using the apparent brightness of the stars, and compared that with their intrinsic brightness based on models of their stellar burning processes. This means that if the Hipparcos distance is correct, it challenges scientists’ understanding of young stars — and everything that happens to them afterwards, including the fate of their planetary systems, says Carl Melis, an astronomer at the University of California in San Diego and the study’s first author. “If we don’t understand young stars, we’re kind of hosed.”

That could very well be the case, says astronomer Floor van Leeuwen at the University of Cambridge, UK, who was a member of the Hipparcos science team and stands firmly behind its results2. Hipparcos surveyed almost 120,000 stars two decades ago to generate a three-dimensional map of the skies. Published in 1997, that map is still the most complete stellar survey of its kind.

Van Leeuwen singles out the physics of convection in the stars’ outer layers as an area of uncertainty that could have thrown off previous results.

David Soderblom, an astronomer at the Space Telescope Science Institute in Baltimore, Maryland, commends the Hipparcos efforts but questions its results, given the countervailing consensus. “They have done, by any measure, the best job humanly possible on their data,” says Soderblom, who obtained one of the previous Pleiades distances using the Hubble Space Telescope3. “But I’m pretty confident they’re wrong.”

Melis and Soderblom say that if a systematic error skewed the Hipparcos measurements, a similar gremlin could also bedevil ESA’s Gaia space telescope, which was due to begin taking data last month. It will use similar techniques to map the distances to roughly a billion stars in our Galaxy over the next five years.

Hipparcos used the same parallax method, but its cameras, built using 1970s technology, could not detect background galaxies for reference. Instead, it checked all of its surveyed stars against every other star in its 118,000-strong catalogue, a monumental task that required two independent teams to verify each other’s work.

Gaia, however, is sensitive enough to use distant galaxies as reference points. “Whether that’s going to save them from whatever caused the Pleiades error, I’m not really sure,” says Melis.

Soderblom proposes that the Hipparcos data may have been thrown off by bright stars that overwhelmed the detector — an idea that van Leeuwen rejects because of Hipparcos’ internal consistency.

Both sides acknowledge that the divide tends to fall between the US and European communities. “Ultimately, the controversy would evaporate immediately if members of the European community, especially Hipparcos team members, were willing to admit that their distance wasn’t right,” Melis says.

Van Leeuwen says, “Everyone relies on [Hipparcos], everyone trusts it — except for the people who are looking at the Pleiades in the States.” He stresses that it is a scientific debate, but says he feels that some astronomers are not listening. “If you don’t produce that kind of answer, you’re persona non grata.”