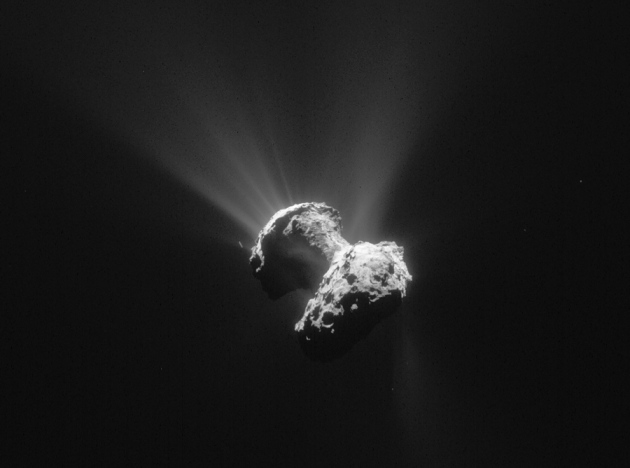 The Rosetta spacecraft has tracked comet 67P/Churyumov-Gerasimenko since May 2014.

Scientists have detected molecules of oxygen in the hazy halo of comet 67P/Churyumov–Gerasimenko — an unexpected discovery that may challenge theories about the formation of the Solar System. The detection, made by an instrument on board the European Space Agency’s Rosetta spacecraft, was reported today (28 October) in Nature1.

“As soon as we got close enough to the comet, we actually found it right away,” says André Bieler, a physicist at the University of Michigan in Ann Arbor and lead author of the paper. Bieler says that he was surprised by both the presence and abundance of molecular oxygen (O2) because it is usually quick to react with other chemicals.

From September 2014 to March 2015, as 67P made its way closer to the Sun, Bieler and his colleagues used a mass spectrometer on Rosetta to sniff the molecules swirling around the comet and identify their chemical composition. They found on average that O2 makes up 3.8% of the cloud relative to the most abundant substance, water.

“It's a tour de force,” says Paul Feldman, an astronomer at Johns Hopkins University in Baltimore, Maryland, who is a co-investigator on another Rosetta spectrometer, Alice. ”I think they've done a very nice job.”

It was not immediately clear where the oxygen came from. The team discovered that water and oxygen were often found together — an indication that similar processes released both molecules. But Bieler and his colleagues ruled out many scenarios in which oxygen arises as a by-product when energetic particles such as photons and electrons split apart water.

Instead, the researchers argue that the oxygen is a remnant from when 67P formed billions of years ago, a process that may have trapped the gas in small grains of ice and rock that coalesced to create the comet’s solid core.

But many models of the early Solar System rule this out because most oxygen tends to pair off with hydrogen. Given this affinity, it is tricky to adjust models of the early Solar System to allow for the survival of gaseous O2, says Mike A’Hearn, an astronomer at the University of Maryland in College Park and a co-investigator on Alice. But he adds that it may be possible with the right chemical abundances and temperature conditions.

Bieler acknowledges that more experiments will be needed to determine what the detection of oxygen really means. “We think this result is of interest beyond the cometary community because it forces us to rethink all of these models,” he says. 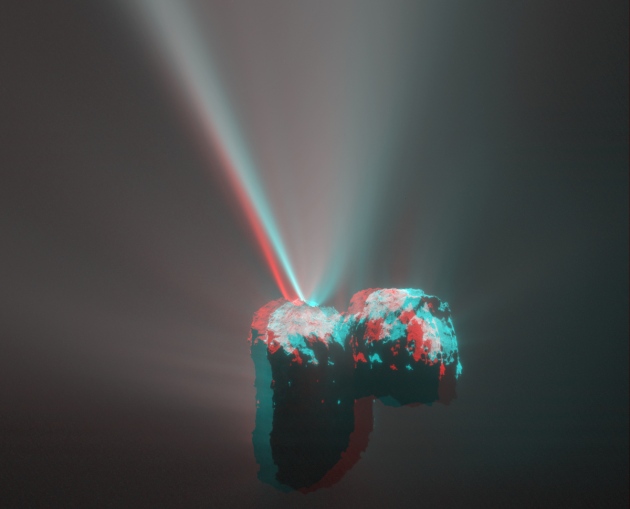 The jet of water and dust coming off comet 67P is shown here in 3D.