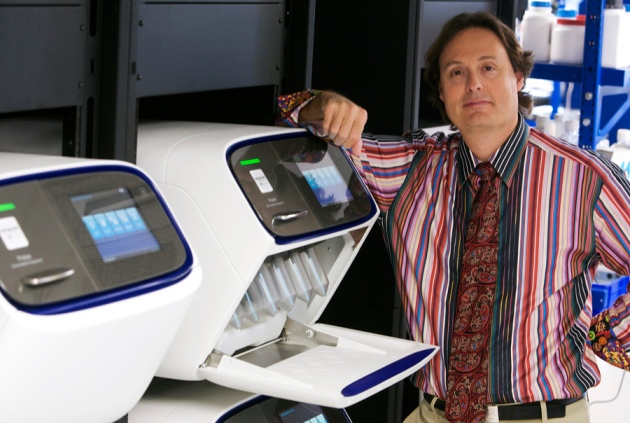 Jonathan Rothberg is on the hunt for the genes that code for mathematical prowess.

He founded two genetic-sequencing companies and sold them for hundreds of millions of dollars. He helped to sequence the genomes of a Neanderthal man and James Watson, who co-discovered DNA’s double helix. Now, entrepreneur Jonathan Rothberg has set his sights on another milestone: finding the genes that underlie mathematical genius.

Rothberg and physicist Max Tegmark, who is based at the Massachusetts Institute of Technology in Cambridge, have enrolled about 400 mathematicians and theoretical physicists from top-ranked US universities in a study dubbed ‘Project Einstein’. They plan to sequence the participants’ genomes using the Ion Torrent machine that Rothberg developed.

The team will be wading into a field fraught with controversy. Critics have assailed similar projects, such as one at the BGI (formerly the Beijing Genomics Institute) in Shenzhen, China, that is sequencing the genomes of 1,600 people identified as mathematically precocious children in the 1970s (see Nature 497, 297–299; 2013). The critics say that the sizes of these studies are too small to yield meaningful results for such complex traits. And some are concerned about ethical issues. If the projects find genetic markers for maths ability, these could be used as a basis for the selective abortion of fetuses or in choosing between embryos created through in vitro fertilization, says Curtis McMullen. A mathematician at Harvard University in Cambridge, Massachusetts, and a 1998 winner of the prestigious Fields Medal, McMullen was asked to participate in Project Einstein and declined.

Rothberg is pushing ahead. “I’m not at all concerned about the critics,” he says, adding that he does not think such rare genetic traits could be useful in selecting for smarter babies. Influenced by a college class he took from a pioneer in artificial intelligence, and by the diagnosis of his daughter with tuberous sclerosis complex, a disease that can cause mental retardation and autism, Rothberg has long been interested in cognition. He is also in awe of the abilities of famous scientists. “Einstein said ‘the most incomprehensible thing about the Universe is that it is comprehensible’,” he says. “I’d love to find the genes that make the Universe comprehensible.”

There is precedent to the concept of sequencing extreme outliers in a population in the hunt for influential genes. Scientists have used the technique to sift for genes that influence medical conditions such as high blood pressure and bone loss. Some behavioural geneticists, such as Robert Plomin at King’s College London, who is involved with the BGI project, say that there is no reason that this same approach won’t work for maths ability. As much as two-thirds of a child’s mathematical aptitude seems to be influenced by genes (Y. Kovas et al. Psychol. Sci. 24, 2048–2056; 2013).

But other geneticists say that intelligence is so complex a trait, influenced by so many genes, that not even a sample of thousands of people would yield sufficient statistical power to get at its genetic basis. They point to studies such as one published in May that examined the genomes of more than 125,000 people and found only three genetic markers with a small effect on how long an individual stays at school (C. A. Rietveld et al. Science 340, 1467–1471; 2013). Project Einstein “is unlikely to have any statistical power”, says geneticist Daniel MacArthur at Massachusetts General Hospital in Boston who, with colleagues, has amassed a pedigree of 13 million related people to try to tackle the heritability of complex traits (see Nature http://doi.org/ppj; 2013).

Some participants in Project Einstein are intrigued by the chance to learn about their own genetic sequences, which will be shared with them. “As a science-fiction fan, I like the idea of having my own genome sequenced,” says David Aldous, a mathematician at the University of California, Berkeley. “Maybe I’ll print a segment onto a T-shirt.”

Others say they wouldn’t be surprised if the study found that maths aptitude was not born so much as made. “I feel that the notion of ‘talent’ may be overrated,” says Michael Hutchings, a mathematician also at Berkeley. He adds that even if genetic markers are found, they could be used for good — not to pre-select for maths geniuses, but to help parents to understand the particular abilities of their children and give them the support they need.

However, McMullen is concerned that the project is appealing to participants’ self-interest without disclosing enough information. “I thought it was strange that it was called ‘Project Einstein’, which seemed designed to appeal to the participants’ egos,” he says. He asked the project’s staff and the New England Institutional Review Board, which approved the study, to explain how results would be used. “The uniform answer to my questions was that ‘we are not responsible for how the information is used after the study is completed’,” he says.

The Rothberg Institute for Childhood Diseases, Rothberg’s private foundation based in Guilford, Connecticut, is the study’s sponsor. But Rothberg won’t say who is funding the project, which other geneticists estimate will cost at least US$1 million. Some speculate that Rothberg is funding it himself. In 2001, Fortune estimated his net worth to be $168 million, and that was before he sold the sequencing companies he founded — 454 Life Sciences and Ion Torrent, both based in Connecticut — for a combined total of $880 million.

Rothberg is adamant that the project is well worth the time and the money, whoever is paying for it. “This study may not work at all,” he says — before adding, quickly, that it “is not a crazy thing to do”. For a multimillionaire with time on his hands, that seems to be justification enough.