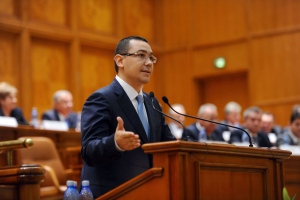 Romanian Prime Minister Victor Ponta has been accused of copying large amounts of his PhD thesis from other sources without proper attribution.

Romania’s new government, still reeling from a misconduct scandal that forced its research minister to resign last month, has been hit by fresh allegations of plagiarism that strike at the very top.

Prime Minister Victor Ponta has been accused of copying large sections of his 2003 PhD thesis in law from previous publications, without proper reference. If the charges are substantiated, they could spark public pressure for Ponta to resign, say political insiders. The allegations are also raising fresh doubts about the government’s ability to tackle corruption in the higher-education system.

Nature has seen documents compiled by an anonymous whistle-blower indicating that more than half of Ponta’s 432-page, Romanian-language thesis1 on the functioning of the International Criminal Court consists of duplicated text. Moreover, the thesis was republished with very minor amendments as a Romanian-language book in 2004 (ref 2), and also forms the basis of a 2010 book on liability in international humanitarian law3. A former PhD student of Ponta’s, Daniela Coman, is named as co-author of the books.

Substantial sections of text in all three publications seem to be identical, or almost so, to material in monographs written in Romanian by law scholars Dumitru Diaconu4 and Vasile Creţu5. They also feature direct Romanian translations of parts of an English-language publication by law scholar Ion Diaconu6.

“The evidence of plagiarism is overwhelming,” says Marius Andruh, a chemist at the University of Bucharest and president of the Romanian council for the recognition of university diplomas. If the allegations are borne out, “a serious discussion is needed in Romania and abroad to prevent this in the future,” says Andruh.

“I understand that in law studies it can be necessary to copy extensive legal articles and definitions,” says Paul Dragos Aligica, a Romanian political scientist at George Mason University in Arlington, Virginia. But Ponta’s alleged plagiarism “goes way beyond that. It’s astonishing”, he adds. Ponta did not respond to Nature’s request for comment on the allegations, and Coman could not be contacted.

“There is very clear evidence in these excerpts that the matter should be investigated further.”

Ponta, leader of the Romanian Social Democratic Party, took office as prime minister only last month, replacing Emil Boc, who stepped down in February following protests against austerity measures that he had introduced. Ponta obtained his PhD from the University of Bucharest while acting as Secretary of State in the government of an earlier prime minister, Adrian Năstase — who was also his PhD supervisor.

“There is very clear evidence in these excerpts that the matter should be investigated further,” says Vlad Perju, a Romanian political scientist and director of the Clough Center for the Study of Constitutional Democracy at Boston College in Chestnut Hill, Massachusetts.

The episode follows the resignation last month of the education and research minister, computer scientist Ioan Mang, following accusations of plagiarism in at least eight papers7. An investigation of that case by the Romanian Research Ethics Council is ongoing.

The latest allegations add to complaints about declining academic standards in Romania. The previous government had introduced measures to make the country’s struggling science and education system more competitive and transparent, but the plans met ferocious opposition from large parts of the academic establishment, and have been substantially relaxed by the current government.

“It’s more than unlikely that this government is fit to create institutional structures in science that Romania urgently needs,” says Aligica. “How can it be, when some of its leaders don’t seem to even remotely understand, or care about, the standards of good science?”

Members of Romania’s post-communist elite — including many politicians — have been eager to acquire academic credentials. In the view of some critics, a number of private and public universities in the country are consequently degenerating into ‘degree mills’ that care little about the quality or novelty of the knowledge that they produce, and which are a breeding ground for academic plagiarism.

“One could almost feel pity for all these guys who have power and money, and who are now craving intellectual recognition,” says Aligica. “Unfortunately these incidents just add to the disrepute of Romanian academic standards and create extra pressure that real Romanian scholars and scientists will now have to fight against.”

At 17:42 BST on 19 June, Nature received the following letter from the press office of the government of Romania:

As you are well aware, on the 18th of June, Mr. Victor Ponta, the Prime Minister of Romania was accused that an important part of hid [sic] PhD thesis was plagiarized, and the publication you are leading has taken up this charge. We would like to make it very clear that these accusations are unsubstantiated and have a very transparent political tinge, regrettably drawing your publication into a conflict. At the same time, we believe that in order to be take [sic] into account, a plagiarism charge must come from a credible source, transparently presented, whereas the article published by your publication does not mention such a source, but quotes anonymous and undisclosed sources, as well as specialists from different fields of science than the one in question.

We consider it our duty to let inform [sic] you, by means of this letter, as to the elements that debunk the charges leveled at the Prime Minister. Hence:

The PhD thesis of the Prime Minister is about the International Criminal Court and was written shortly after this institution was set-up. The purpose of the paper was to explain to the Romanian law community the main elements pertaining to the functioning of the International Criminal Court. We would like to make it known that in 1999 Victor Ponta was a member of the Committee charged with drafting the rules of procedure and evidence, being delegated for this purpose by the Romanian Public Ministry.

Unfortunately, a lack of information on the domestic political dynamics of Romania has led to your publication’s unfortunate involvement in a political action.

These unsubstantiated accusations appear in a particularly hectic moment and their objective is none other than putting pressure on the domestic political debate of Romania. We would like inform you that at the moment, there is a legal dispute between the Government of Romania and the President of Romania as to who is legally responsible of [sic] representing the position of our country within the European Council which will be held at the end of July.

The intention of the authors of this attack, who will not take public responsibility for their action, is mainly to alter the character of the domestic debate on Romania’s representation at the European Council in a manned [sic] favorable to the incumbent president, Traian Basescu.

We considered it an obligation to make all these elements known to you, being perfectly aware of the importance of these trumped up charges. We ask you to take them all these [sic] contextual informations into consideration when you decide on your publication’s involvement in this matter.