When the grasshopper mouse attacks a bark scorpion, it barely notices the arachnid's intensely painful sting. Now researchers know why: the rodents have a mutation in the cellular pathway that controls their pain response, making them resistant to scorpion venom.

The finding, published today in Science1, suggests a potential target for researchers trying to develop pain-relieving drugs. “It’s a nice, complete study — from behaviour right down to the molecule that explains the behaviour,” says Ewan Smith, a neuroscientist at the University of Cambridge, UK, who was not involved with the research.

The resistance to the venom helps grasshopper mice, which belong to the genus Onychomys and are only distantly related to ordinary house mice (Mus musculus), survive in the deserts of the southwestern United States. There, bark scorpions are plentiful, but other food resources are less common. Ashlee Rowe, an evolutionary neurobiologist at Michigan State University in East Lansing, and her colleagues confirmed field observations of the grasshopper mouse’s ability to withstand scorpion stings by injecting the paws of grasshopper mice and house mice with a small amount of venom. The house mice repeatedly licked their paws, indicating discomfort, but the grasshopper mice licked only a few times. 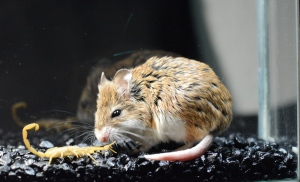 Grasshopper mice are resistant to the venom of bark sorpions.

The researchers next identified the molecular pathway that is modified in the neurons of grasshopper mice. Two sodium channels are necessary to transmit a pain signal in mammals: one that initiates the signal and one that propagates it. (Drug research has focused mainly on the former; in humans, a rare mutation in that channel causes the inability to feel pain.) Scorpion venom stimulates the initiating channel, but in grasshopper mice, it also inhibits the channel that controls propagation of the pain signal — thus preventing the pain it is supposed to cause.

Researchers think that a small structural difference between the pain-propagating sodium channels of the grasshopper mouse and of the house mouse can explain the species’ reactions to scorpion venom. In grasshopper mice, the protein making up the sodium channel differs by one amino acid near the channel's opening. Without that change, venom cannot inhibit the channel propogating pain signals.

Rowe thinks that other molecular changes may also contribute to the grasshopper mouse’s insensitivity to venom, but the amino-acid alteration she identified has a central role.

“This really an outstanding paper,” says Rock Levinson, a neuroscientist at the University of Colorado School of Medicine in Aurora. He commends the multidisciplinary approach of the study, which pulls together evidence from experiments in behaviour, electrophysiology and molecular biology.

Thomas Park, a neuroscientist at University of Illinois at Chicago who has found a similar pain-resistance mechanism in naked mole rats2, says that he is excited to see a similar trait evolve in parallel in two species.

In both cases, a substance blocks its own pain signal by acting on a modified sodium channel downstream to the receptor it initially activated to cause pain. That suggests research on the pain-blocking abilities of these two animals could eventually yield insights with medical applications.