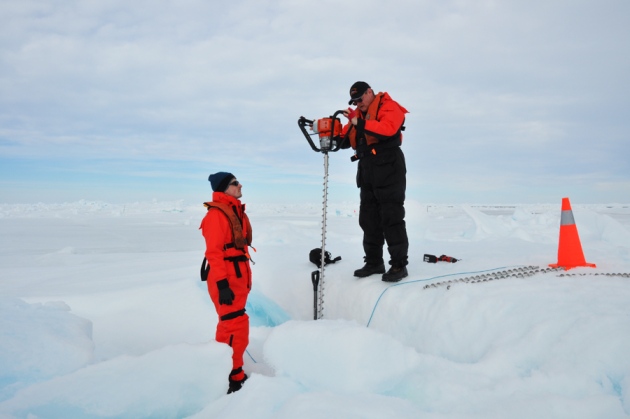 Most measurements of Antarctic sea ice have been made by drilling through sea ice.

Risky robotic exploration of the vast expanse of sea ice around Antarctica has revealed it to be far thicker in many places than previously measured.

“The conventional picture of Antarctic sea ice being a thin veneer over the ocean is probably only true for some portion of it,” says Ted Maksym, an ice researcher at Woods Hole Oceanographic Institution in Massachusetts (WHOI). “We need to do a better job of surveying the overall ice cover.”

Previous observations of the thickness of Antarctic sea ice produced a mean draught — the depth between the waterline and the bottom of the ice sheet — of around 1 metre; the new work gives a mean draught of over 3 metres. And a previous maximum recorded ice-sheet thickness of 10 metres has now been increased to 16 metres.

The earlier measurements were limited by their reliance on ships smashing their way into the region and deploying teams to drill a hole down which a tape measure can be inserted. The technique produced only a limited number of direct observations.

For their work Maksym and co-investigators Guy Williams from the University of Hobart, Tasmania and Jeremy Wilkinson of the British Antarctic Survey in Cambridge, UK, used a robot known as an autonomous underwater vehicle (AUV) to cruise under ice in three regions near the coast and measure the thickness directly over a much larger area. 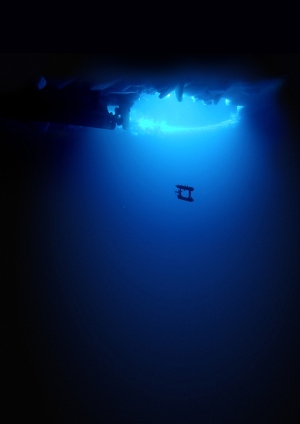 An autonomous underwater vehicle owned by the Woods Hole Oceanographic Institution peers at the underside of Antarctic sea ice.

Running AUVs under ice is a risky business. The British Antarctic Survey lost its Autosub 2 robot on one of the first under-ice missions in 2005. And on the first deployment for Maksym’s project, their AUV — a SeaBED-class vehicle owned by WHOI — got stuck and had to be rescued by another robot.

But the results were worth the trouble: the team found ice that was significantly thicker than that previously recorded by drilling.

The thickness stems from the sheets of sea ice crashing into each other and piling up into highly deformed — and rather thicker — sections. It is not clear from these data how much greater the overall volume of the ice is than previously thought. Maksym’s team have still only measured a tiny fraction of the sea ice that forms around Antarctica every year. Their data set of 500,000 square metres is the most comprehensive ever published, but is dwarfed by the total extent of the sea ice, which averages nearly 20 million square kilometres at its annual maximum.

But it does show, Maksym says, that “there are significant areas of the Antarctic pack that are thicker and more deformed than the areas we traditionally survey”.

The results are not entirely surprising to some polar scientists. As research vessels sensibly steer clear of thicker ice that may trap them, there is a clear risk of sampling bias toward thinner ice.

Stephen Ackley, who studies sea ice at the University of Texas at San Antonio, says there have been a few previous observations of thicker ice in Antarctica.

“We’ve always felt we have some difficulties in making observations of this very thick ice. What they’ve done is to qualify it well,” he says. “It is clearly [because] the ships haven’t been operating in these areas.”

The more data scientists can gather about Antarctic sea ice, the more they can unpick why climate models struggle to accurately predict its extent. Although researchers have been generally successful at modelling the huge declines in Arctic sea ice, the extent of Antarctic sea ice has actually increased in recent years, contrary to the predictions of models. More under-ice AUV surveys could calibrate satellite measurements of ice thickness, allowing researchers a better understanding of what is really going on around the frozen continent.

Olivier Lecomte, who works on sea-ice modelling at the Catholic University of Louvain in Belgium, says that much of the analysis of the discrepancy between models and observations focuses on the extent and coverage of the ice sheets. Having accurate measurements of the thickness as well provides another angle on the issue. “It’s invaluable data,” he says.