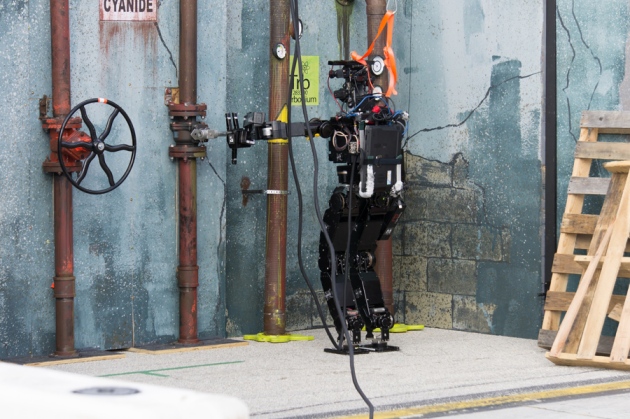 Contestants in the DARPA Robotics Challenge must shut off a valve, a task that could be crucial in an industrial accident.

When the humanoid robot SAFFiR gets a shove, it reflexively moves to maintain its balance. SAFFiR can also walk over uneven terrain, turn its head to scan its surroundings and — with the help of a human operator — reach out to grasp objects.

Built by a team at Virginia Tech in Blacksburg, SAFFiR is a firefighting robot and a proto­type for one that will compete in the final stage of the DARPA Robotics Challenge (DRC), a contest run by the US Defense Advanced Research Projects Agency. The aim is to produce robots with improved mobility, autonomy and responsiveness to human commands. On 5 March, DARPA will announce the 25 finalists who will vie for the US$2-million first prize at the final event in June.

Most advanced robots today follow preset instructions in familiar environments, such as a factory floor, or are almost entirely remotely controlled, says Gill Pratt, a programme manager at DARPA who is running the contest. But there is a need for shrewder, nimbler machines that can operate in less-predictable situations. For example, radiation from the 2011 Fukushima nuclear meltdown in Japan made it unsafe for people to manage the contamination. The robots that could be deployed for clean-up were slow and maladroit, and could do little more than survey the damage.

DARPA set up the contest to spur the develop­ment of robots that might perform better in future disasters, and several rounds of the competition have been held since the event’s launch in 2012.

A key to winning will lie in a robot’s ability to do things on its own, such as deciding how high to lift a leg to climb a step, or tracking its location relative to a target object. During trials in December 2013, robots had to complete tasks such as shutting off a valve, climbing a ladder and driving a car through a winding speedway course. Those with greater autonomy performed better, according to an analysis by Holly Yanco, a computer scientist at the University of Massachusetts at Lowell. Robots were faster and errors were easier to fix when they needed less human input.

For the final round, the machines will compete with a time limit, without an external power source and sometimes without communication with their operators. This mimics real disaster scenarios, in which connectivity can be spotty. DARPA expects that this constraint will encourage teams to increase their robots’ capacity to map out, plan and act independently. “Success at this level would be a huge achievement,” says Pratt. 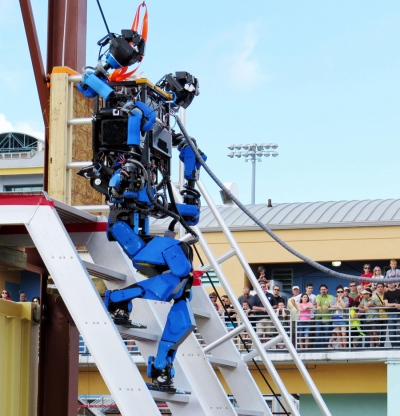 A robot developed by Japanese company Schaft takes the DARPA Robotics Challenge in 2013.

Robots have become reasonably good at sensing and moving, says Henrik Christensen, chair of robotics at the Georgia Institute of Technology in Atlanta. Remote sensors on SAFFiR, for example, measure force and body position (part of what allows the robot to find its centre of gravity); cameras and software let it monitor distance and potential obstacles. CHIMP, a robot built by a team at Carnegie Mellon University in Pittsburgh, Pennsylvania, transitions deftly from trundling along on four tank treads to standing on two.

But the machines are “not much good at making judgements, like deciding if something is a drill or a cup, or figuring out which is relevant to what it needs to do”, Christensen says. “These things turn out to be very hard, and humans are much better at them.”

Some teams want to better translate what a robot sees into something that a human operator can easily understand. The goal is to create an efficient human–robot team that is “more like having two humans, where one directs the other”, says Todd Danko, who leads a DRC team from defence contractor Lockheed Martin. In fact, Yanco’s analysis found that teams with better-designed human–robot interface platforms were better at completing contest tasks.

“I think a big part of this contest is that it will get people to embrace a kind of ‘shared autonomy’ between the humans and the robots,” says James Kuffner, a roboticist at Google in Mountain View, California. “That means thinking about what’s necessary for the human to do, for the robot to do, and for how to tell that to the robot.”

DARPA-sponsored robot contests in the mid-2000s focused on autonomous transport and were driven by an interest in taking human couriers off the explosive-strewn streets of Iraq and Afghanistan. These races helped to spawn interest in driverless cars from companies such as Google.

In more recent years, the defence department has recommended that the military change its approach to autonomous systems and focus on collaboration between people and technology. Unlike autonomous trucks and unmanned drones, the robots under development for the current competition will be accomplices — not mere sub­stitutes — in helping humans to get difficult jobs done.