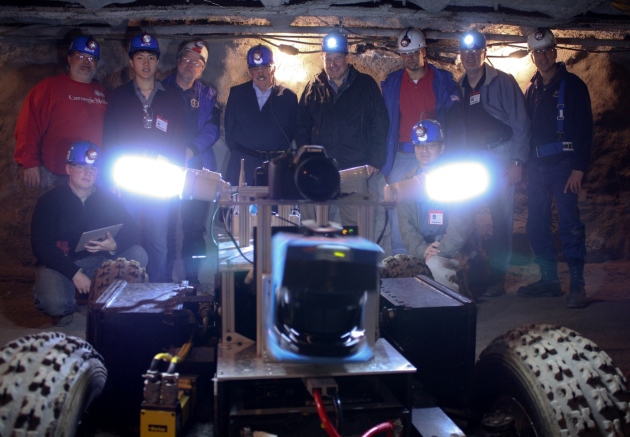 William 'Red' Whittaker often spends his Sundays lowering a robot into a recently blown up coal mine pit near his cattle ranch in Pennsylvania (see video). By 2015, he hopes that his robot, or something like it, will be rappelling down a much deeper hole, on the Moon.

The hole was discovered three years ago when Japanese researchers published images from the satellite SELENE1, but spacecraft orbiting the Moon have been unable to see into its shadowy recesses. A robot might be able to “go where the Sun doesn't shine”, and send back the first-ever look beneath the Moon's skin, Whittaker told attendees at a meeting of the NASA Innovative Advanced Concepts (NIAC) programme in Hampton, Virginia, this week.

“This is authentic exploration, this is the real deal,” says Whittaker, a roboticist at Carnegie Mellon University in Pittsburgh, Pennsylvania, whose robots have descended into an Alaskan volcano and helped to clean up the Three Mile Island nuclear power plant. “This is really going where none have gone before.”

Over the next two years, the NIAC programme will spend about US$500,000 developing Whittaker's creations. The prototype he tested at the coal mine could be lowered into the Moon pit to check the walls for openings. But a more ambitious approach would be a robot that jumps down the hole or lowers itself using a cable. The first prototype of such a machine, a four-wheeled Cave Crawler, can drive itself around underground and is already practising in the mine's tunnels. Onboard lasers sweep the floors, walls and ceilings to map out the tunnels.

Ever since the hole was discovered, researchers have been keen to work out its origin. Estimated to be about 65 metres wide and at least 80 metres deep, it seems too deep to be a crater. And its location in the once-volcanic Marius Hills region suggests that the opening is a 'skylight', an entrance to an intact horizontal tunnel beneath the surface, carved long ago by flowing lava.

Lava tubes have long been considered good locations for building lunar bases. “Their rocky ceilings can protect humans from micrometeorite impacts and cosmic rays,” says Carolyn van der Bogert, a geologist at the University of Münster in Germany.

Protected Moon caves may also house records of the history of the Moon and Solar System. Rocks that have been shielded from damage could look just like the surface did when it first cooled, or have textures that have been moulded by hidden processes going on inside the Moon, says Penelope Boston, a cave scientist and astrobiologist at the New Mexico Tech in Socorro. And solar-wind particles implanted billions of years ago could provide clues about the early evolution of the Sun, says van der Bogert.

“We don't really know what's down there,” says Boston. “We might be punching down through to a deeper layer that we have not seen from the small amount of lunar material collected at the surface.”

The Moon isn't the only astronomical body that is pocked with holes. Pits on Mars, lined up like strung beads above what seem to be lava tubes, promise to reveal details about the planet's inner layers without the need for drilling holes. And underground caves on Mars could shelter ice deposits, or even remnants of life.

“If you want to find past life on Mars, caves are a good place to look,” says Timothy Titus, a astrophysicist at the US Geological Survey in Flagstaff, Arizona. “They're protected.”

Getting to Mars isn't easy, but Whittaker may soon have the means to put one of his robots on the Moon. His company, Astrobotic Technology in Pittsburgh, has signed a contract with SpaceX to launch a rocket that will carry robotic technology designed by Astrobotic to the Moon. The mission is competing for the Google Lunar X PRIZE — $20 million for the first privately funded team to land an autonomous vehicle on the Moon, move it 500 metres and send back data including videos.

Whittaker is no stranger to big prizes. In 2007, a team he led took first place in the Defence Advanced Research Projects Agency's Grand Urban challenge, with a Chevrolet Tahoe that autonomously navigated city streets in California using technology similar to that in the Cave Crawler. The Moon may be much farther away, but at least there aren't any traffic laws up there.