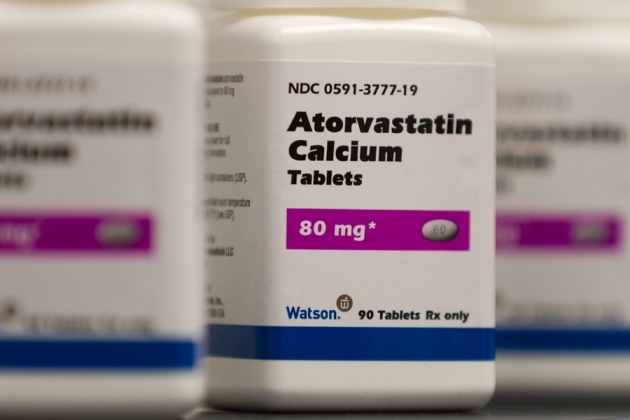 A cholesterol-lowering RNA-based drug could provide an alternative to statins.

Results from a small clinical trial suggest that RNA-based drugs could be a viable therapy for fighting high cholesterol.

The study, sponsored by Alnylam Pharmaceuticals in Cambridge, Massachusetts, is published today in The Lancet1, and suggests that a process known as RNA interference, or RNAi, can be used to halt production of a protein called PCSK9. The protein ordinarily binds to and triggers the destruction of receptors that would otherwise mop up 'bad' LDL cholesterol from the blood.

If larger clinical trials bear these results out, Alnylam's PCSK9 therapy could join a host of others jockeying to reach the growing market of patients with high cholesterol levels. In the United States alone there are over 63 million patients with high cholesterol, some of whom do not respond to standard therapy with statin drugs. Analysts have estimated the market for PCSK9-targeted therapies at over $4 billion.

Alnylam's trial was conducted in 32 healthy participants, and was designed to test the safety of an RNAi drug, rather than how well it works. But a competing cholesterol therapy, which uses antibodies to target PCSK9, is already being tested in large, late-stage trials. The first results from one such trial, conducted by the Paris-based pharmaceutical company Sanofi, are expected shortly.

The antibodies, if deemed successful, could provide an alternative to the widely used cholesterol drugs called statins, and have already been hailed as potential blockbuster drugs. The importance of the Lancet study, however, may lie more in validating the use of RNAi for therapeutic ends, says Jean-Claude Tardif, a cardiologist at the Montreal Heart Institute in Canada, who was not involved with the latest study. “It’s among the first demonstrations of RNA interference working in humans in a safe and tolerable way,” says Tardif. “It’s very exciting.”

The RNAi field has struggled to turn its promise into medicine. It has been dogged by key logistical challenges — notably the difficulty of delivering therapeutic RNA to its site of action, while keeping it unscathed by the journey. But over the past few months, Alnylam has published results of other small clinical trials for RNAi treatments for cancer2, and for a condition called transthyretin amyloidosis that can affect nerves and the heart3.

Of the 32 participants in the latest cholesterol trial, 24 received a single dose of Alnylam's PCSK9-targeting RNAi drug. Expression of the protein plummeted by 70% on average, and LDL-cholesterol levels fell by 40%. It is possible, says Tardif, that subsequent doses of the drug could further lower LDL levels.

Even if PCSK9-targeting RNAi drugs emerge from larger clinical trials as a scientific triumph, it is unclear whether they will be a business success. RNAi drugs will face stiff competition from antibody medicines such as Sanofi’s, which can be injected into the skin. Alnylam’s RNAi drug must be injected into a vein, notes Tardif — a more complicated method of administration that might put the approach at a disadvantage. And some of the antibodies have been reported to reduce LDL levels by more than 70%. “Up to now, the antibodies appear to be better at reducing LDL cholesterol,” says Tardif. “But it’s early in the game for the RNAi drug.”