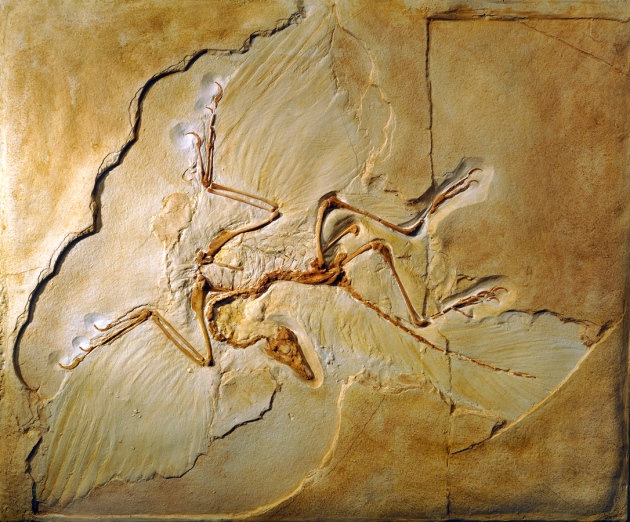 Fossil remains of Archaeopteryx established it as the first bird — but that title is now under threat.

The iconic status of Archaeopteryx, the first animal discovered with both bird and dinosaur features, is under attack. More-recently discovered rival species show a similar mix of traits. But Archaeopteryx still hogged the opening symposium at the 2014 Society of Vertebrate Paleontology meeting in Berlin last month, and even festooned the official conference beer glasses.

As the simplistic idea of a ‘first’ bird gives way to a messy evolutionary transition, newly discovered fossils and improved analysis techniques put Archaeopteryx in prime position to unravel the details. “Research on Archaeopteryx is really catching a new breath,” says palaeobiologist Martin Kundrat of Uppsala University in Sweden, who co-organized the symposium at the November meeting.

The first Archaeopteryx fossil specimens turned up in limestone quarries in Bavaria, southern Germany, in the early 1860s. Until recently, they were the only fossil specimens found to mix bird- and dinosaur-like features. On the one hand, they are small — the fossils show juvenile creatures about the size of a magpie, which as adults may have been raven-sized — and have broad feathered wings that look good for gliding; on the other, they have a jaw with sharp teeth, dinosaur-like claws and a bony tail. These features led to the idea of the first bird, and generations of scientists have treated the 145-million-year-old animal as a ‘transitional species’ — the key piece of evidence linking birds and dinosaurs (Archaeopteryx is Greek for ‘ancient feather’, whereas its German name, Urvogel, means ‘first bird’). 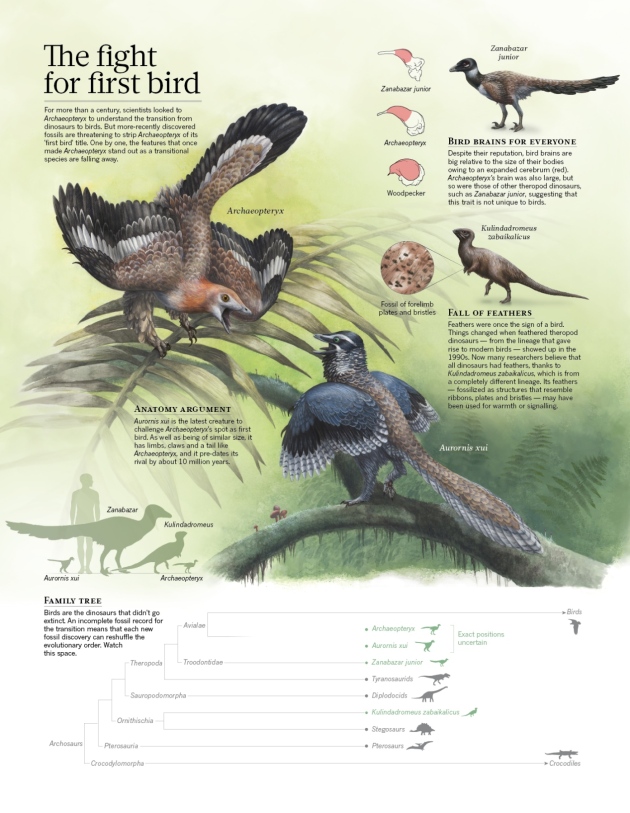 But starting in the 1990s, the unique status of Archaeopteryx faced a challenge from the discovery in China of other potential transitional species. Fossils of Anchiornis huxleyi and Microraptor gui reveal small-bodied creatures like Archaeopteryx, and they may have used their four wings to glide. Another, Aurornis xui, has legs, claws and a tail similar to those of Archaeopteryx, yet lived about 10 million years earlier, leading some to propose it as a better candidate for first bird (see ‘The fight for first bird’).

Many scientists now believe that Archaeopteryx is just another dinosaur. Others find this hard to swallow. “To some ornithologists this is a really big deal — Archaeopteryx is the first bird,” says Gareth Dyke, a vertebrate palaeontologist at the University of Southampton, UK. “They’d rather cut off one of their legs than admit it has nothing to do with bird origins.”

New specimens of Archaeopteryx are also reinvigorating research. There are now 12 known fossils of the creature, and at the symposium Kundrat unveiled the first scientific description of the eighth to be discovered. Researchers lost track of the ‘phantom’ after it was found in Germany in the early 1990s, until a collector purchased it in 2009. It is now on loan to a Bavarian museum with an agreement that it will always be available for research.

Kundrat reported that the phantom lived more recently than other Archaeopteryx fossils, bolstering suggestions that there may been more than one Archaeopteryx species. And in July, an analysis1 of the eleventh fossil showed that the animals boasted feather-covered legs, suggesting that the feathers evolved for purposes other than flight, such as display or insulation. Kundrat says that the twelfth specimen might soon emerge from a private collection.

Scientists are also developing techniques to analyse Archaeopteryx. Kundrat presented a three-dimensional (3D) scan of the rock-embedded bones of the phantom, which he made with help from scientists at the European Synchrotron Radiation Facility in Grenoble, France. “Now we have the first very detailed picture of the Archaeopteryx skull,” he says.

Palaeontologist Ryan Carney of Brown University in Providence, Rhode Island, presented a 3D X-ray-tomography body scan of an Archaeopteryx fossil known as Thermopolis and a surface scan of another fossil. (Carney sports a black feather tattoo as a nod to his part in the discovery2 of pigment structures in Archaeopteryx’s feathers that suggest the bird was black.) Both analyses will help to model whether and how Archaeopteryxflew and to determine its place in the transition from dinosaurs to birds.

Revelations about Archaeopteryx’s brain are already informing its place in the evolutionary tree. Last year, evolutionary biologist Amy Balanoff of Stony Brook University in New York and her colleagues reported3 in Naturethat the brains of Archaeopteryx and a variety of dinosaurs related to it were, like modern birds, all relatively large for their body sizes. Because earlier dinosaurs did not fly as well as modern birds, if they flew at all, the finding suggests that the brain expansion occurred well before flight emerged. It is yet another clue that Archaeopteryx may not have been any more bird-like than other suggested transitional species. “It’s another piece of data that has taken away from the specialness of Archaeopteryx,” says Balanoff.

“Archaeopteryx is becoming one more fossil in this really diverse family tree.”

Balanoff is now investigating whether the Archaeopteryx brain shares finer anatomical details — inferred from skull shape and small impressions on it — with theropod dinosaurs, the lineage that gave rise to birds. Her team also reported3 the discovery of a structure called a wulst in the Archaeopteryx brain, which was previously found only in living birds. The wulst, involved in perception, might have helped the creature to process visual information during flight. But the question is whether it, too, is present in Archaeopteryx’s dinosaur kin.

Taken together, the findings suggest that there was no neat transition from dinosaur to bird, making the idea of a first bird seem increasingly arbitrary and prone to the caprices of an incomplete fossil record. “I love Archaeopteryx. I did a thesis on the animal,” says Nicholas Longrich, a palaeontologist at the University of Bath, UK. “But in some ways, we’re moving beyond Archaeopteryx. It’s becoming one more fossil in this really diverse family tree.”

Some think the debate over the transition will one day be moot. “The boundary between dinosaurs and birds in the future will completely disappear,” says Ulysse Lefevre, a palaeontologist at the University of Liège in Belgium, who discussed new fossils from China at the Berlin meeting that might further blur the line.

What is clear is that Archaeopteryx research is still key to understanding the dinosaur–bird family tree. “There are some controversies over whether Archaeopteryx is the first bird or not. I don’t think it matters at the moment.”says Kundrat. “We are bringing Archaeopteryx back to life through new quantifiable analysis.”