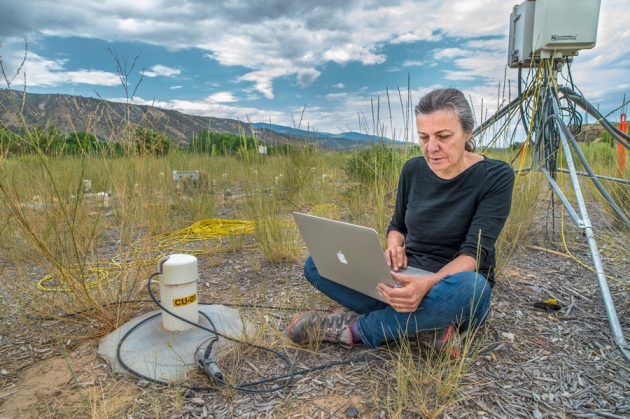 Jill Banfield, a geomicrobiologist, studies bacteria and archaea, looking for genes and proteins that manipulate the genomes of other species.

The biomedical research initiative created by Facebook co-founder Mark Zuckerberg and his wife, physician Priscilla Chan, has awarded its first grants to scientists, on topics ranging from the genomics of obscure microbes to a memory-retrieval device.

Forty-seven investigators will receive up to US$1.5 million each in the next five years from the Chan Zuckerberg Biohub, a partnership between the couple’s Chan Zuckerberg Initiative and three universities: Stanford, the University of California, Berkeley, and the University of California, San Francisco. Together, the biohub grants announced on 8 February total more than $50 million.

“We told researchers, give us your riskiest ideas,” says biohub co-leader Stephen Quake, a bioengineer at Stanford. More than 750 investigators from the three schools answered the call to submit proposals that elucidate fundamental biological processes and lead to disease-related technologies. Quake says he and other grant reviewers favoured researchers who have impressive track records and bold ideas that lack preliminary evidence. “There is a creative anarchy in the atmosphere here in the Silicon Valley that we want to harvest,” Quake says.

Jure Leskovec, a computer scientist at Stanford and chief scientist at the image-sharing company, Pinterest, won a grant even though his work has focused on analysing social networks rather than biological systems. Leskovec successfully argued that his approach to data could help biologists to understand the complicated interactions of genes and proteins exposed to drugs or disease.

“I don’t think I’d get funding to pursue biological research through traditional funding sources because the grant reviewers would be sceptical,” he says. “They’d say, oh, he’s not one of us.”

Other winners express the same sentiment, whether they are engineers who yearn to lead biology projects or biologists wanting to follow a hunch. The US National Institutes of Health (NIH) wants to see a lot of preliminary data, Quake explains: “We want to fund people so that they are more likely to get the NIH grant later.”

Sceptics have questioned whether the couple’s money might be better spent by public institutions such as the NIH and the World Health Organization. But Quake says that the biohub instead seeks to complement those agencies: “We are trying to take on things that are above their threshold of risk.”

Indeed, neither the biohub nor its parent initiative could replace government funding even if it wanted to. The initiative’s $3-billion commitment to science that aims to cure, manage or prevent all diseases pales in comparison with the roughly $30 billion that the NIH spends annually on medical research.

The biohub’s leaders hope to accelerate the rate at which its grantees’ discoveries prove useful by requiring investigators to meet several times each year. One participating scientist, geomicrobiologist Jill Banfield of Berkeley, looks forward to the gatherings. She’ll be probing enigmatic bacteria and archaea for genes and proteins that manipulate the genomes of other species, and that might be harnessed for new technologies.

In the mid-2000s, Banfield helped draw attention to repetitive genetic sequences called CRISPR within bacteria that she had found in a defunct iron mine in California. Thanks to further work by biochemists, CRISPR–Cas9 has become the hottest tool in gene editing. “Everything I do is basic discovery, but to go on to the next step requires new techniques and methodology that I’m not in a position to do alone,” she says.

The biohub investigators must post their manuscripts on open-access preprint servers, such as the arXiv, as soon as they submit the paper to a peer-reviewed journal. But researchers are permitted to file for patents, which would be owned jointly by the biohub and the scientists’ home institution.

Marc Kastner, president of the Science Philanthropy Alliance, an organization in Palo Alto, California, has advised Chan and Zuckerberg, among others. He applauds the biohub for selecting researchers who want to pursue non-traditional projects in this first round of funding. “If you’re going to take a century-long view on curing disease,” he says, “you need to emphasize basic research because you can’t tell where breakthroughs come from.”