The asteroid that exploded on 15 February this year near the city of Chelyabinsk in the Urals region of Russia was the largest to crash to Earth since 1908, when an object hit Tunguska in Siberia. Using video recordings of the event, scientists have now reconstructed the asteroid's properties and its trajectory through Earth’s atmosphere. The risk of similar objects hitting our planet may be ten times larger than previously thought, they now warn.

The fireball’s early-morning flight through the sky over the Urals was observed by many people and captured by numerous video cameras. To observers on the ground, it shone 30 times brighter than the Sun, and had an energy equivalent to more than 500 kilotons of TNT. An analysis of calibrated observations now provides a precise picture of the asteroid’s last ride and reveals surprising details of its likely cosmic origin.

The rock was an ordinary chondrite from the asteroid belt located between the orbits of Mars and Jupiter, as revealed by its trajectory and by its elemental and mineral composition, mainly silicates that formed the Solar System billions of years ago. At the time it entered the atmosphere, its mass was of the order of 12,000–13,000 metric tonnes, report two studies published online today in Nature1 and another study published at the same time in Science2. This is nearly twice as heavy as initial estimates had suggested and also larger than revised estimates published in June.

The asteroid roared through Earth’s upper atmosphere at an initial speed of around 19 kilometres per second — more than 50 times the speed of sound. At an altitude of between 45 and 30 kilometres, the heavily fractured, and hence rather fragile, body broke into pieces and finally burst into gas and dust at around 27 kilometres' altitude. 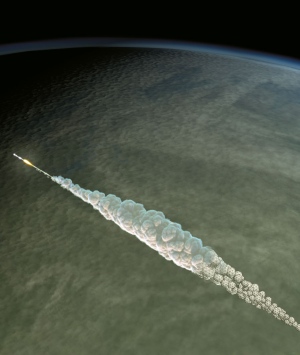 A three-dimensional simulation of the 15 February airburst over Chelyabinsk, Russia.

“Luckily, most of the kinetic energy was absorbed by the atmosphere,” says Jiří Borovička, an asteroid researcher at the Astronomical Institute, part of the Academy of Sciences of the Czech Republic in Ondřejov, near Prague. ”A more solid rock that might have blasted closer to the ground would have caused considerably more damage.”

Although thousands of small meteorites have been found in the area, only a few larger pieces seem to have survived the blast. One 3.4-kilogram rock fell near the town of Timiryazevskiy; another hit the roof of a house in Deputatskiy. The largest single surviving fragment, a 600-kilogram meteorite, was recovered last month by divers from the bottom of Lake Chebarkul, some 60 kilometres southwest of Chelyabinsk. An eerie-looking hole in the ice, and tentative trajectory calculations, had caused researchers to assume early on that a big chunk had landed in the shallow lake.

The shock waves resulting from the main blast blew people off their feet and shattered thousands of windows in Chelyabinsk, reports an international team led by Olga Popova of the Russian Academy of Sciences’ Institute of Geosphere Dynamics2. In the weeks after the event, the team had carried out a survey of damage in 50 villages scattered throughout the impact region.

In Chelyabinsk, the roof of a zinc factory collapsed. In the nearby town of Yemazhelinsk, a window frame at the local library blew in and smashed a statue of Russia’s treasured national bard, Alexander Pushkin.

One of the papers in Nature1 finds that before the asteroid met its fate, its orbit was strikingly similar to that of a much larger, 2-kilometre body, known as asteroid 86039, first observed in 1999.

“This is hardly a coincidence,” says Borovička. The unusual similarity strongly suggests that the two bodies may once have been part of the same object, he says (see 'Russian meteor may have gangmates in tow').

The position and orbit of asteroid 86039 are precisely known. So are the orbits of most of the estimated 1,000 or so asteroids of at least 1 kilometre diameter that are circling the Sun. No known large asteroid is currently on a collision course with Earth — at least not for the next couple of centuries, says Borovička.

Much less is known about the millions of smaller objects that roam the Solar System. The Chelyabinsk asteroid had approached Earth from a region of the sky that is inaccessible to ground-based telescopes. In the 6 weeks before the impact, it would have been visible above the horizon only during the daytime, when the sky is too bright to see objects of its size, says Borovička.

“The residual impact risk — from asteroids with yet-unknown orbits — is shifting to small-sized objects,” says Peter Brown, a planetary scientist at the University of Western Ontario in London, Canada, and an author on the Nature papers.

Of the millions of estimated near-Earth asteroids 10–20 metres in diameter, only about 500 have been catalogued. Models suggest that an object the size of the Chelyabinsk asteroid hits Earth once every 150 years on average, Brown says. But the number of observed impacts exceeding 1 kiloton of TNT over the past 20 years alone hints at an actual impact risk that may be an order of magnitude larger than previously assumed, Brown and his co-workers show in their study3. Scanning the visible sky with a view to identifying approaching small objects might be a prudent response, he suggests. One such asteroid detection and early-warning system, ATLAS, is being established in Hawaii.

“Calculating meteor trajectories isn’t easy physics by any means,” he says. “I’m stunned at how the fairly good-quality YouTube videos have enabled such beautiful science.”