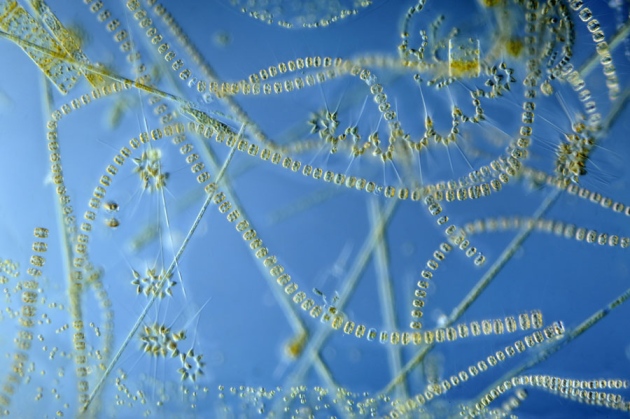 Marine phytoplankton releases sulphur compounds into the atmosphere that contribute to cooling the planet. But ocean acidification could hinder this process.

The slow and inexorable increase in the oceans’ acidity as they soak up carbon dioxide from the atmosphere could itself have an effect on climate and amplify global warming, according to a new study. Acidification would lead certain marine organisms to emit less of the sulphur compounds that help to seed the formation of clouds and so keep the planet cool.

Atmospheric sulphur, most of which comes from the sea, is a check against global warming. Phytoplankton — photosynthetic microbes that drift in sunlit water — produces a compound called dimethylsulphide (DMS). Some of this enters the atmosphere and reacts to make sulphuric acid, which clumps into aerosols, or microscopic airborne particles. Aerosols seed the formation of clouds, which help cool the Earth by reflecting sunlight.

James Lovelock and colleagues proposed in the 1980s that DMS could provide a feedback mechanism limiting global warming1, as part of Lovelock’s ‘Gaia hypothesis’ of a self-regulating Earth. If warming increased plankton productivity, oceanic DMS emissions might rise and help cool the Earth.

More recently, thinking has shifted towards predicting a feedback in the opposite direction, because of acidification. As more CO2 enters the atmosphere, some dissolves in seawater, forming carbonic acid. This is decreasing the pH of the oceans, which is already down by 0.1 pH units on pre-industrial times, and could be down by another 0.5 in some places by 2100. And studies using 'mesocosms' — enclosed volumes of seawater — show that seawater with a lower pH produces less DMS2. On a global scale, a fall in DMS emissions due to acidification could have a major effect on climate, creating a positive-feedback loop and enhancing warming.

Katharina Six at the Max Planck Institute for Meteorology in Hamburg, Germany, and her colleagues have applied these mesocosm data to a global climate model developed at their institute. In a 'moderate' scenario described by the Intergovernmental Panel on Climate Change, which assumes no reductions in emissions of heat-trapping gases, global average temperatures will increase by 2.1 to 4.4 °C by the year 2100.

The model projected that the effects of acidification on DMS could cause enough additional warming for a 0.23 to 0.48 °C increase if atmospheric CO2 concentrations double. The moderate scenario projects CO2 doubling long before 2100. Their paper is published in Nature Climate Change today3.

“The result in itself doesn’t surprise me too much,” says Michael Steinke, a researcher at the University of Essex. But he thinks that incorporating such results into predictive global models is important. “This is something that hasn’t really been done very much yet,” he says

However, Steinke points out a recent study of his own4 indicating that oceanic DMS emissions might be more affected by increasing temperature than acidity. Warmer waters tend to make more DMS, so it could increase overall in future. The new study does take warming into account, but Steinke emphasizes that the effect of acidification on DMS production is better understood than that of other human-induced environmental changes.

Tom Bell, a marine biogeochemist at the Plymouth Marine Laboratory in the UK, advises caution in extrapolating mesocosm data obtained over weeks into changes occurring over decades. Six recognizes that limitation in her team’s study. “It is definitely not encased in stone.” She points out that there have been no mesocosm experiments in tropical and subtropical regions, and that running simulations with different models would help to rule out error.

All agree that it is important to recognize that marine organisms will be affected by environmental changes and that this may impact the climate in return. “CO2 that is absorbed by the ocean is still climate-relevant”, says Six.