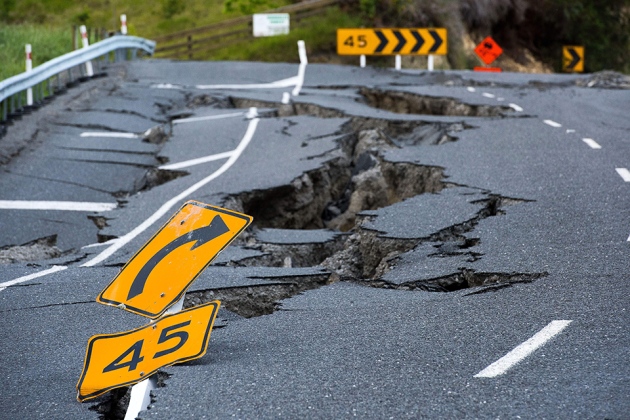 A 2016 tremor in New Zealand destroyed roads and set off slow slip movements deep in the two crustal plates off the country’s east coast.

The consequences of a magnitude-7.8 earthquake that struck New Zealand on 14 November 2016 are still rippling through the country. The quake, which killed two people and caused billions of dollars of damage, ruptured a complex set of geological faults near the surface. It also triggered slow-motion movement as deep as 40 kilometres in Earth’s crust, some of which continues to this day, scientists report. That deep ‘slow slip’ is worrying, because it adds to the risk of another big quake.

“This earthquake is special,” says Bill Fry, a seismologist at GNS Science, a government-owned Earth-science research organization in Lower Hutt, New Zealand. He and others described their findings last week in Denver, Colorado, at a meeting of the Seismological Society of America.

The November Kaikoura tremor is a rare example of a large quake triggering widespread slow slip. And what researchers have learned from this tremor could illuminate the seismic risk in other regions that experience slow slip, such as Japan and the US–Canadian Pacific Northwest.

A spate of large earthquakes has rattled New Zealand in the past decade, including one in 2011 that devastated the city of Christchurch. But the Kaikoura tremor stands out for its geological complexity.

It began near the north end of New Zealand’s South Island and ripped northward for more than 170 kilometres1. At least 21 separate faults broke along the way. Landslides buried roads and the shaking damaged buildings in the central business district of Wellington2.

The earthquake immediately triggered slow-slip movement in at least three separate areas, according to GNS Science. The regions stretched from off the east coast of the North Island to the northern part of the South Island. In each case, the Australian and Pacific plates of Earth’s crust ground against one another extremely slowly, at a dangerous interface known as a subduction zone. 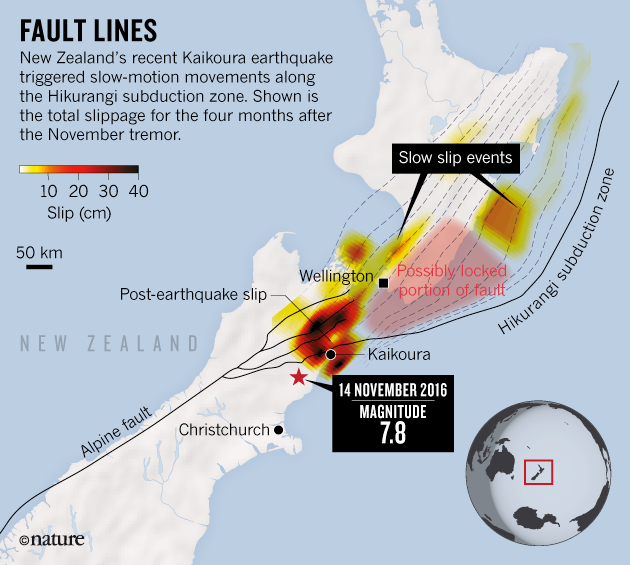 Most of the slow slip ceased within weeks, although a little of it continues. Cumulatively, the plate motions have released as much energy as a magnitude-7.3 earthquake would have.

These patches of Earth’s crust have slipped slowly before — but never all at once, said GNS Science seismologist Anna Kaiser at the meeting. The areas in motion surround a section that experiences no slow slip at all. This region, extending east of Wellington, may be locked and building up stress that could break in the next large quake.

Seismologists have observed slow-slip movement in other subduction zones, in some cases coming before large tremors, including the devastating magnitude-9 Tohoku quake in Japan in 2011. How the two phenomena relate to one another is not entirely clear. “We’re at the very early stages of trying to understand the relationship between slow-slip events and earthquakes,” says Laura Wallace, a geophysicist at GNS Science and the University of Texas at Austin.

Peering into the future

The revelations from New Zealand could alter future planning in quake-prone areas. Earthquake forecasts look at past seismic activity and calculate the probability of tremors of a certain magnitude within a certain time period. They typically do not include the effects of slow slip. But after the Kaikoura quake, GNS scientists added that movement into their own calculations and found a 5% chance of a similar quake within a year. That is a relatively low probability, but is still six times higher than it was before the quake.

With the New Zealand government busy retrofitting buildings and roads in preparation for future quakes, researchers are working to quantify what they do and do not know. For instance, seismic-risk models typically consider the rupture of one fault at a time — but after Kaikoura, geologists now realize they need to plan for the possibility of the simultaneous rupture of multiple faults. “This just really emphasizes that that needs to be done,” says Matt Gerstenberger, a GNS seismologist who works on the national seismic-hazard model.

Researchers will gain greater insight into slow-slip movement late this year and next, when several project teams descend on the region. In November, the JOIDES Resolution ship will begin the first of two expeditions to drill into the slow-slip area off the New Zealand coast. A ship-borne seismic survey, to begin in early 2018, will provide a 3D look at where the slow slip is happening. And a bevy of new ocean-bottom seismometers will track the shaking as the plates continue to move.

“It will be the best-imaged slow-slip area, anywhere in the world,” Wallace says. “We’re trying to apply everything we can to this.”