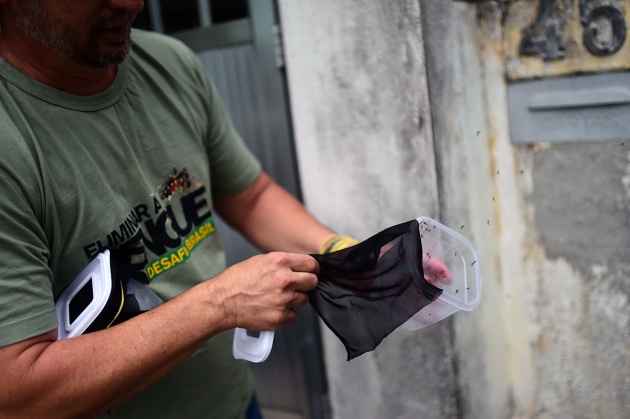 Two South American metropolises are enlisting bacteria-infected mosquitoes to fight Zika, in the world’s biggest test yet of an unconventional yet promising approach to quell mosquito-borne diseases.

Mosquitoes that carry Wolbachia bacteria — which hinder the insects' ability to transmit Zika, dengue and other viruses — will be widely released in Rio de Janeiro, Brazil, and Medellín, Colombia, over the next two years, scientists announced on 26 October. The deployments will reach around 2.5 million people in each city.

“This really has the potential to be a game changer in terms of vector control — the biggest thing since DDT,” says Philip McCall, a medical entomologist who studies mosquito control at the Liverpool School of Tropical Medicine, UK.

Small numbers of Wolbachia-infected mosquitoes have already been released in both Rio de Janeiro and Medellín. But large biomedical funders have today announced US$18 million for a massive scale-up of these efforts. “We really want to deploy quite quickly in large sections of these cities,” says Scott O’Neill, a microbiologist at Monash University in Melbourne, Australia, and head of the Eliminate Dengue Program, which is leading the mosquito releases.

Footing the bill are the Bill and Melinda Gates Foundation in Seattle, Washington, the London-based Wellcome Trust and the US and UK governments. Brazil’s government is chipping in with an extra $3.7 million, O’Neill says.

Wolbachia pipientis plagues some 60% of insect species worldwide — but doesn't naturally infect Aedes aegypti mosquitoes, the species that transmits Zika, dengue and numerous other viruses. The bacteria can hinder the fertility of their hosts and influence the sex of offspring. They can also block viruses from reproducing in infected fruit flies and mosquitoes, as O’Neill and his colleagues discovered in work that began in the late 1990s. The team later developed laboratory populations of infected A. aegypti.

When tens of thousands of these mosquitoes were released near the small city of Cairns in northern Australia in 2011, the bacteria spread rapidly among local A. aegypti mosquitoes; 90% of mosquitoes in a targeted area were infected within weeks. Tests in Indonesia and Vietnam found similar success. It's not yet clear whether the strategy also reduces rates of dengue infections in humans, but O’Neill’s team has begun a trial in Yogyakarta, Indonesia, to find out.

The Eliminate Dengue team started releasing Wolbachia-infected mosquitoes in two Rio de Janeiro neighbourhoods in 2014, and in a suburb of Medellín in 2015. The bacteria block the replication of Zika and chikungunya virus (which caused widespread outbreaks in Latin America and the Caribbean in 2013–14). O’Neill’s team hopes that the scaled-up deployments can combat those diseases, as well as dengue, which infected an estimated 1.6 million people in Brazil last year. The researchers plan to release mosquitoes in waves across the cities, survey the insects for viral infection and track the local incidence of disease in areas with and without Wolbachia-infected mosquitoes.

Other scientists are also testing Wolbachia to control mosquitoes. In Singapore, officials plan to release male A. aegypti mosquitoes infected with a strain of Wolbachia that renders their offspring infertile. A US biotechnology company is seeking approval to use a similar approach to combat related Asian tiger mosquitoes (Aedes albopictus), which carry dengue and chikungunya. In Guangzhou, China, scientists are already releasing millions of A. albopictus mosquitoes infected with Wolbachia each week, in large-scale field trials. And researchers in French Polynesia are trying the same strategy on another species of tiger mosquito.

Wolbachia has an impressive ability to surge through wild mosquito populations, says McCall, but proving that this limits human infections will be critical before the approach can find widespread use. If Wolbachia is to make a dent in mosquito-borne diseases, the technique will also have to be cost-effective and long lasting, he adds. “If it works, it will be truly remarkable, but it has to still be working in ten years.”

Another hurdle facing the tests in Rio de Janeiro and Medellín is the sheer size of the cities — especially Rio, with its densely populated and hard-to-access favelas, says McCall. But if Wolbachia can help to combat Zika, dengue and chikungunya in such environments, “there is a very strong case for doing it for a range of other large cities”, says Mike Turner, acting director of science at the Wellcome Trust.

Widespread deployment of Wolbachia-infected mosquitoes would probably also depend on an endorsement from the World Health Organization, he adds.

Public support could make or break the Wolbachia approach, says O’Neill, whose team spent years engaging with communities in Australia before deploying mosquitoes there. Wolbachia is already widespread among insects and it cannot infect humans, he notes. In Australia, researchers recruited schoolchildren, whom they dubbed Wolbachia warriors, to rear the eggs at home, learn about their development and then release the mosquitoes.

In Colombia, the Eliminate Dengue team has worked with “Casa Wolbachia” families to help with the release of mosquitoes, and even written salsa songs about the bacteria, says co-principal investigator Jorge Osorio, a pathobiologist at the University of Wisconsin–Madison. “We have communities asking us to spread more mosquitoes,” he says.