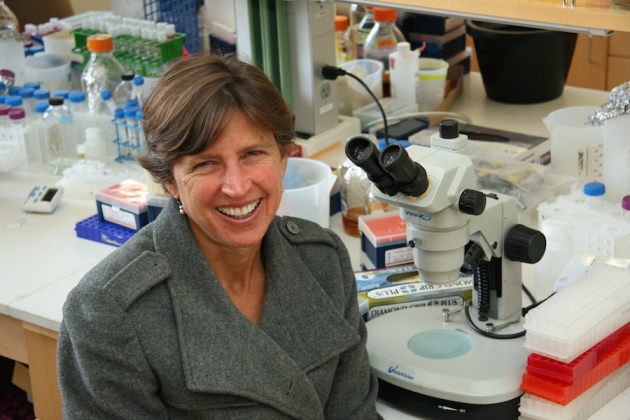 A team of biologists has made good on a “devastating” mistake by painstakingly producing the correct result after a high-profile retraction.

The 24 July publication in Science Advances1, reporting the identity of a long-sought trigger of the immune response in rice, comes from a group led by plant pathologist Pamela Ronald at the University of California, Davis, who retracted their own work and alerted colleagues to mistakes. The case has been hailed as a brilliant example of how to handle errors in science.

In 1995, Ronald and her team identified a gene encoding the XA21 receptor in rice2. This helps to defend the plant against a bacterium called Xanthomonas oryzae pv. oryzae, which causes rice blight  — a disease that has led to major rice crop failures in many countries.

But in 2013, the researchers voluntarily retracted two publications3, 4, which had erroneously identified the Ax21 protein as the trigger of this immune response. The first errors were uncovered in June 2012 after postdocs Rory Pruitt and Benjamin Schwessinger joined Ronald’s lab and could not replicate the earlier work.

Eventually the team discovered that the error had arisen from mislabelled bacterial strains and an unreliable test of immune activation. Their subsequent actions led to praise for their efforts to inform the community and correct the scientific record5.

In their latest work1, Ronald and her colleagues present evidence that a protein they named RaxX does cause the immune response in rice once a sulfate group has been added to it.

“They make a compelling case that this is the actual sulfated protein they were originally looking for,” says Lindsay Triplett, a plant microbiologist at the Connecticut Agricultural Experiment Station in New Haven. “It’s good to see that science can be corrected — especially since it can be nearly impossible to get funding for, or publish, research that’s already been done.”

Toby Bruce, a crop-protection specialist at Rothamsted Research in Harpenden, UK, says that Ronald has earned credibility by being her own whistle-blower. “The community will appreciate this,” he says. “Trust is built when research findings are repeatable.”

Shaken by the 2013 retractions, Ronald’s team was determined to continue her 20-year search to find the protein that elicits this immune response, she says. They found that mutant bacteria lacking the gene that encodes for RaxX are able to evade the rice immune response. When the mutants were altered to express the gene, they became susceptible to XA21-mediated immunity. And rice plants treated with the purified RaxX protein triggered the response, even in the absence of bacteria. Having also found the RaxX gene in pathogenic species of bacteria that infect eight other crop species, the findings may help to develop new resistant crop varieties.

The team collaborated with plant biochemist Georg Felix at the University of Tübingen in Germany, who is co-author of a 2012 commentary on the risks of contamination when working with synthetic peptides to double-check findings6. Felix's team conducted several of Ronald's experiments independently in his lab. It is a step rarely taken in the plant research community, Felix notes, but one that he hopes will instil confidence in these results.

“This is the most important paper of my career — it means everything to me,” says Ronald. Not only does it correct a devastating mistake, she says, but it is also proof of the plant–microbe communication she has been searching for. And it proves her team pulled together to see the story through.

As for how the retraction saga has altered working practices in her lab, Ronald now requires that three independent researchers validate new experimental approaches before publication. And all lab members now use electronic notebooks to make it easier to find data once members have left the lab.

“Every lab is going to make mistakes, you need to have efficient way to track it down,” she says.

Still, the stigma associated with retractions does not fade easily. The team notes that one reviewer of their latest paper asked: “How do we know the strains weren’t mixed up again?” In response, the team highlighted the diverse set of mutants they used to validate the results.