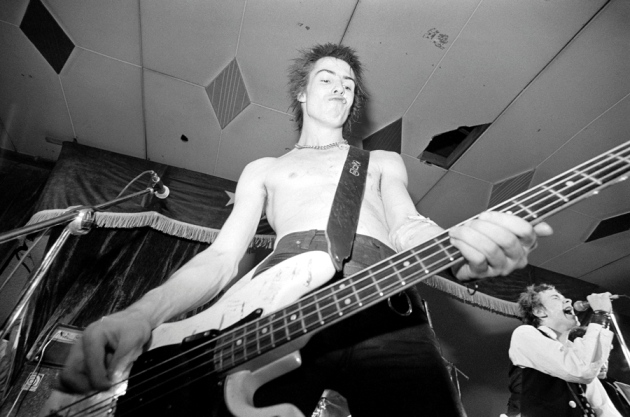 Lead guitarists usually get to play the flashy solos while the bass player gets only to plod to the beat. But this seeming injustice could have been determined by the physiology of hearing. Research published today in the Proceedings of the National Academy of Sciences1 suggests that people’s perception of timing in music is more acute for lower-pitched notes.

Psychologist Laurel Trainor of McMaster University in Hamilton, Canada, and her colleagues say that their findings explain why in the music of many cultures the rhythm is carried by low-pitched instruments while the melody tends to be taken by the highest pitched. This is as true for the low-pitched percussive rhythms of Indian classical music and Indonesian gamelan as it is for the walking double bass of a jazz ensemble or the left-hand part of a Mozart piano sonata.

Earlier studies2 have shown that people have better pitch discrimination for higher notes — a reason, perhaps, that saxophonists and lead guitarists often have solos at a squealing register. It now seems that rhythm works best at the other end of the scale.

Trainor and colleagues used the technique of electroencephalography (EEG) — electrical sensors placed on the scalp — to monitor the brain signals of people listening to streams of two simultaneous piano notes, one high-pitched and the other low-pitched, at equally spaced time intervals. Occasionally, one of the two notes was played slightly earlier, by just 50 milliseconds. The researchers studied the EEG recordings for signs that the listeners had noticed.

That detection by the brain showed up as a characteristic spike of electrical activity, known as a mismatch negativity (MMN), produced by the brain's auditory cortex about 120–250 milliseconds after the deviant sound reached the ear. It is a known indication that the brain senses something wrong — a kind of 'huh?' response that Trainor and her colleagues had previously investigated to detect listeners’ responses to 'errors' in pitch2.

The researchers found that the MMN signals were consistently larger for the mistiming of a lower note than for a higher note. They also measured the participants’ ability to adjust their finger-tapping to deviant timings of notes, and found that it was significantly better for the lower notes.

The MMN does not depend on conscious recognition of a timing error — in fact, participants were told to watch a silent film during the tests and to pay no attention to the sounds they heard. And although Trainor says that “the timing differences are quite noticeable”, the MMN response precedes any conscious awareness of them.

The researchers also used a computer model to find out how the ear responds to their test sounds and found that the signal from the auditory nerve connected to the cochlea, a portion of the inner ear that is central to hearing, provided a less clear indication of the timing of a high-pitched note than a low note. The team suggests that the differences arise at a fairly early stage of cognitive processing.

Cognitive scientist Tecumseh Fitch at the University of Vienna says that the study “provides a very plausible hypothesis for why bass parts play such a crucial role in rhythm perception.”

The results are surprising, says cognitive musicologist Henkjan Honing of the University of Amsterdam, but “there are plenty of alternative interpretations”. For instance, the tone quality of the note, known as timbre, could be important: “The use of a piano tone could be contributing to the difference observed,” he says. “Different timbres should be used to prove it's really the pitch that causes the effect.”

Fitch adds that for louder, deeper bass notes than those used in these tests, people might also feel the resonance in their bodies, not just hear it in their ears, helping us to keep rhythm. For example, when deaf people dance they might turn up the bass and play it very loud, he says, so that “they can literally ‘feel the beat’ via torso-based resonance.”