With a shake-up of its national academy and a major boost in research funding next year, Hungary hopes to regain its long-lost status as a scientific power­house in central Europe.

The Hungarian Academy of Sciences dominates the country’s research scene. Like most of its counterparts in the formerly communist countries in central and eastern Europe, it is a cross between a distinguished learned society and an operational research organization, supporting research at universities and employing around 2,800 scientists at 40 research units.

The country has an eminent scientific past, boasting a string of Hungarian-born Nobel prizewinners in the twentieth century. But today its funding and scientific output lag behind those of many other European nations.

“Many of our present institutes have a mundane office air about them when they should be inspiring academic hubs,” says József Pálinkás, the academy’s president, who has campaigned vigorously for the changes since his re-election in May. “Without more pronounced teamwork and competition we will lose our foothold in the world’s scientific community.”

At a special general assembly held last week in Budapest, three-quarters of members with voting rights approved a plan to reorganize the academy into ten large multidisciplinary research centres. These will have revised research agendas, modernized management structures and international advisory boards that regularly review operations. Five remaining institutes, including the prestigious Institute of Experimental Medicine in Budapest, will remain separate and keep their existing remits.

Scientists formerly working in isolated institutes will be brought together to pursue more collaborative research at the new centres, which will cover disciplines including photonics and particle physics, astronomy and the Earth sciences, chemistry and materials research, ecology, energy research, and the humanities. Two vacated buildings will be sold and the revenues invested in improving other institutes. On 19 December, Pálinkás will appoint interim directors of the new centres, before the positions are advertised internationally next year.

During communist times, the institutes were organized along Soviet lines — controlled by an exclusive circle of academicians and funded directly by the state, with no competitive grants or external review of research agendas. The new structure is inspired by Western research organizations such as Germany’s Max Planck Society, Pálinkás says, where principal investigators vie for grants in a highly competitive system.

“There are some people here who have a strong dislike of change of any type,” says Tamás Vicsek, a biophysicist at the Eötvös Loránd University in Budapest who oversees one of some 140 academy-funded university research groups. “But the new generation of Hungarian scientists is eager to see improvements in how research is operated in this country — and I totally agree with them that this is what we need.”

Vicsek, who won a European Research Council advanced grant in 2008 for his work on collective cell motion, says that he is looking forward to collaborating with the academy’s multidisciplinary centre for natural sciences, which will be based at his university’s campus in a laboratory facility currently under construction. “I’m always in favour of putting biology next to physics,” he says. “It’s a big improvement and it will certainly facilitate joint research.” 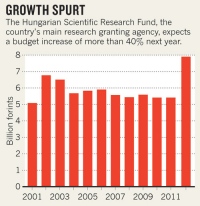 Science advocates have also secured the first notable increase in government funding in almost a decade. In 2012, the government will increase its funding to the academy by more than 20%, from Ft35 billion (US$152 million) to Ft43 billion. This includes a more than doubled contribution of Ft2.5 billion for a programme created in 2009 to help young scientists set up independent research groups in Hungary. Because Prime Minister Viktor Orbán is eager to break with the weak institutions of the post-communist era, insiders say that modernization of the academy was a prerequisite for the funding boost.

The extra money will enable the new centres to hire some 200 young group leaders and senior scientists next year, says Pálinkás. Moreover, Ft2.3 billion will be spent on urgently needed research equipment next year, and the budget of the Hungarian Scientific Research Fund, Hungary’s main grant-giving agency for basic research, will rise from Ft5.4 billion to around Ft8 billion (see ‘Growth spurt’).

The changes are set to bring Hungarian science capacity closer to that of neighbouring eastern European Union member states such as Slovenia and the Czech Republic. But to capitalize on the changes, Hungary must also revamp its inefficient patent system and other bureaucratic hurdles to innovation, says Balázs Gulyás, a Hungarian neurobiologist at the Karolinska Institute in Stockholm, who is also executive director of the World Science Forum, a biannual science policy conference held in Budapest. “The academy changes were absolutely necessary, but they are only a first step,” Gulyás says.