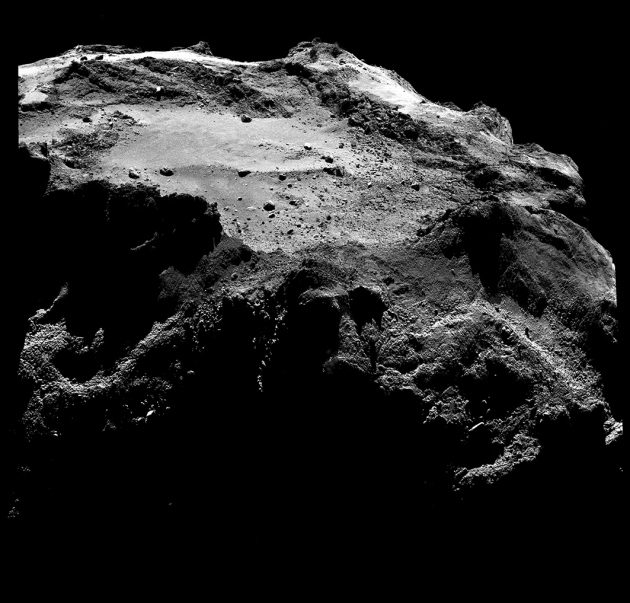 Drilling the surface of comet 67P/Churyumov–Gerasimenko will be among the next tasks for the Philae lander, if it can establish a better communications link.

“We all said the chance that the lander would wake up was 50:50, but actually many of us thought it was much less,” says Uwe Meierhenrich, an analytical chemist at the University of Nice Sophia Antipolis in France. He is one of a group of scientists from the Rosetta comet mission who met last week in Rome to hash out a plan should their lander, Philae, awaken from its slumber on the surface of a comet. Not a peep had been heard from Philae since its battery ran out seven months ago, three days after a historic landing on comet 67P/Churyumov–Gerasimenko.

The doubters were in for a surprise. Days later, at 22:28 Central European Standard Time on 13 June, the European Space Agency (ESA) received a signal from Philae.

Scientists had hoped that as the comet neared the Sun, the craft’s solar panels would provide it with enough power to wake, but they also feared that the cold might prevent a reboot. The incoming data show that not only is Philae awake, but also that its prognosis is better than anyone had hoped. “Both temperature- and power-wise we are in a really good state,” says lander manager Stephan Ulamec of the German Aerospace Centre (DLR) near Cologne.

The Rosetta scientists are itching to begin experiments. But first the communication link — which depends on a direct line-of-sight between the lander and the Rosetta mothership currently orbiting the comet — has to improve. So far, the communication bursts have been just a few minutes long, compared with three-hour stints in November, and were often interrupted, suggesting that Philae is not in the orientation that scientists had predicted. It might be that the lander has moved a little, says Meierhenrich. But Ulamec reckons that the predictions — used to align Rosetta’s antenna — were “slightly wrong” to begin with.

The team is piecing together how to shift Rosetta’s orbit to better align the two craft, something ESA plans to do on 17 June. “By the end of the week we really should be getting better, longer communication slots,” says Ulamec.

Philae’s 24 watts of available power is a “good amount”, says Koen Geurts, a member of the landing team at the DLR. “It’s more than enough to communicate and to do science activities.” And the lander’s reported operating temperature of –35 °C should be warm enough for the team to attempt turning on the battery. “Then we are not relying on the short window when the lander is illuminated,” he adds. “We can do more things.”

Assuming that the instruments have survived the cold, the first experiments will measure the comet’s magnetic and electric fields and temperature, says Ulamec. Next, Philae will start up its cameras, which were last deployed when Philae landed. “The surface might have changed, and we might see different features due to changing illumination,” says Ulamec.

The CONSERT radar instrument, which is designed to probe the comet’s interior, will be used to pinpoint Philae’s exact location: although scientists knew that Philae had landed in November, they do not know exactly where it ended up, because it bounced twice.

Eventually, Philae should deploy its drill to get samples from the comet’s crust, says Meierhenrich, who is a co-investigator on Philae’s chemical analyser, COSAC.

With enough sunlight to recharge its battery, Philae has potentially more power and more operating time than before hibernation, meaning that it should now be able to do more-complex experiments. For example, it could use an infrared microscope to examine samples before they are chemically analysed, to verify that its drill did scoop something up. “We couldn’t do this in the first science phase; we had to run the most simple system we could,” says Meierhenrich.

The comet is now a very different environment from when Philae landed, with a much stronger outpouring of gas and dust. For Philae, the change of seasons is double-edged: there will be more particles in the atmosphere for the lander to ‘sniff’, says Ulamec, but the particles pose a danger to Rosetta’s navigation systems, and will continue to intensify until August, when the comet will be closest to the Sun. To avoid damage, Rosetta might need to retreat to such a distance that it would no longer be able to communicate with Philae on the surface. But once the comet rounds the Sun in September, Rosetta could come back in closer and let Philae phone home again.