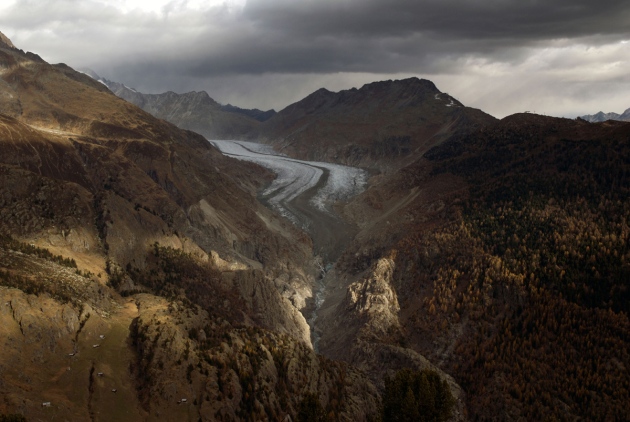 The rapid retreat of glaciers all over the world is a threat to insects that live in streams and rivers fed by melt water.

The rapid retreat of glaciers is one of the most visible signs of Earth's changing climate, but the disappearance of the ice is altering far more than physical landscape.

An analysis suggests that species that live in the streams and rivers that flow from melting glaciers could begin to vanish when just half of the glacial cover in a region is lost.

The finding comes from a team that looked at the diversity of insect larvae in water at 103 sites fed by glaciers in the Ecuadorian Andes, the European Alps and Alaska’s coastal mountains. The researchers compared the number of species to the percentage of glacier cover in the catchment area.

In areas with high glacial cover, they predict, several species will start to disappear when cover drops to 50%. If the glaciers in all three regions were to disappear, between 9 and 14 species would be totally lost, representing 11% of the diversity in Ecuador, 16% in the Alps and 38% in Alaska.

“We had no idea that so many small invertebrates were restricted to this kind of environment,” says Dean Jacobsen, a freshwater biologist at the University of Copenhagen and one of the authors of the study, which is published in Nature Climate Change today1.

Alpine invertebrates have previously been a somewhat neglected area of study, and the effects of climate change on them are only now being properly teased out. Last year Clint Muhlfeld, an ecologist at the United States Geological Survey’s Northern Rocky Mountain Science Center in West Glacier, Montana, and his colleagues showed that the meltwater stonefly (Lednia tumana) relies on sections of alpine streams just 500 metres long and is thus extremely threatened by climate change2. The team warned that more research on such species was “urgently needed to avoid extinctions”.

The latest paper, says Muhlfeld, “really fills the knowledge gap on a global scale”. A crucial problem is that these species have such limited and specific ranges that conservation options available with other endangered animals — such as relocation and habitat restoration — are not applicable.

Addressing climate change is the only long-term solution. “This can’t be dealt with on a local level,” says Muhlfeld.

Although the Intergovernmental Panel on Climate Change was in 2010 forced to step back from claims that glaciers in the Himalayas would disappear by 2035 (see 'IPCC apologises for Himalayan glacier melt error'), many of the world’s glaciers are undoubtedly in retreat.

One study3 estimates that tropical glaciers in Mexico and South America have already retreated by some 30% since the mid-1980s. Another analysis4 suggests that the majority of the world’s smaller glaciers will disappear by 2100 (see 'The end for small glaciers').

“In many regions they are disappearing and they will disappear,” says Jacobsen. In Ecuador, “every time we reach a study site we can clearly see they retreat about 15 metres per year. It’s really, really, fast.”

John Brittain, who works on aquatic alpine biology at the Natural History Museum in Oslo, notes that many of these glacial streams are in areas that are already affected by activities such as tourism and hydropower development. That might allow for some local mitigation work, even if global action is the only long-term solution to these species' plight.

“If glaciers disappear completely there will be no suitable habitat for many of these species that are poor competitors in warmer, more stable habitats," says Brittain. "In areas where glaciers disappear completely, there is probably little we can do, but where some glaciers remain it is paramount to maintain glacier-fed rivers in a pristine state without anthropogenic impacts.”