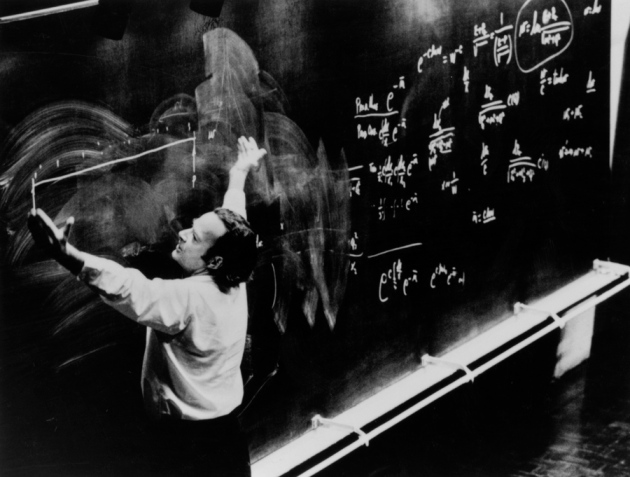 Scientists are working to improve on Richard Feynman’s representations of particle interactions.

Forty-odd years after US physicist Richard Feynman decorated his van with the wiggly diagrams that had won him a share of the 1965 Nobel Prize in Physics, the hunt is on for ways to improve on those representations.

Feynman’s images depict ways in which subatomic particles interact during collisions, giving physicists an easy-to-visualize way to calculate ‘scattering amplitudes’: mathematical expressions that define the probabilities of various outcomes. High-energy physicists and quantum-gravity theorists alike are seeking a deeper understanding of those interactions, in work that ranges from the development of geometric ways of representing the terms used to calculate the scattering of particles, to the practical development of better algorithms.

The effort has potentially broad consequences. The emergence of a definitive set of tools would make life easier for researchers attempting to calculate the events that occur in particle colliders. And, on a more profound level, it might reveal the structure of space-time in a future quantum theory of gravity — a breakthrough that would unify modern physics.

Scrutinizing the structure of such calculations for clues to the geometry of space-time — and how that might be warped under the influence of gravity — is a relatively new trend. Research into the amplitudes of scattering particles has already allowed physicists at CERN, Europe’s particle-physics laboratory near Geneva in Switzerland, to calculate complex particle interactions occurring in the centre’s Large Hadron Collider (LHC)1. And elsewhere, quantum-gravity theorists are seeking to formulate calculations that can combine quantum mechanics, which describes small particles, with Einstein’s general theory of relativity, which describes gravity.

In the 1940s, Feynman drew diagrams to depict how interactions between particles could take place — for example, two electrons scattering off each other could exchange a single photon. Today, Feynman’s diagrams are being replaced by more efficient algorithms, and researchers are finding fresh geometric ways to represent terms in those algorithms.

Last year, David Skinner, a theoretical physicist at the University of Cambridge, UK, and Freddy Cachazo of the Perimeter Institute for Theoretical Physics in Waterloo, Canada, found a way to represent scattering amplitudes in a theory called ‘supergravity’. This incorporates the effects of gravity and the theory of supersymmetry, in which particles are paired with heavier ‘superpartners’ in a way that makes calculations more tractable2. By doing so, Skinner says, he found that scattering amplitudes in the theory can be translated into strange geometric objects termed twistor spaces, first described by physicist Roger Penrose in the late 1960s. Skinner says that his calculations support Penrose’s hunch that twistor spaces — in which light rays are represented as points — can form the basis of a quantum theory of gravity. “It’s telling you something about the nature of the theory of gravity,” he says.

Others are constructing alternative geometric shapes that also represent the scattering of particles. Nima Arkani-Hamed of the Institute for Advanced Study in Princeton, New Jersey, and his colleagues are preparing a paper on an object that they are calling the amplituhedron, which represents scattering amplitudes as the volume of a polygon with the same number of vertices as particles. The relationship of the object to quantum gravity is still opaque, but Arkani-Hamed hopes that the work is pointing the way to an elegant, universal geometric picture of gravity.

And there are other games in town. Calculations of scattering amplitudes usually contain a step in which all the possibilities are integrated, but in August, Pedro Vieira and his colleagues at the Perimeter Institute reported3 a way to calculate scattering amplitudes directly, without going through the integration step. Vieira says that scattering amplitudes can be calculated from the area of a curved surface bounded by a polygon — a shape not unlike that a soap bubble might make as it was blown through a polygon-shaped hole. This is a very different geometric object to the ampli­tuhedron, but the two are not mutually exclusive. “We are using different approaches, but both are right,” Vieira says.

Such advances have practical implications. In July, Zvi Bern at the University of California, Los Angeles, and his co-workers reported their use of an algorithm that had been developed to improve on Feynman diagrams. They harnessed it to calculate the scattering of quarks and gluons in the proton beams at the LHC that could produce a W boson and five jets of particles1. This is three jets more than it has proved possible to calculate using Feynman diagrams alone.

Physicist Joe Incandela, a CERN spokesman, says that the calculation has enabled scientists working at the LHC to search for more subtle signals of supersymmetry in their experiments than they had initially thought possible.

Supersymmetry is a prime candidate for a theory that would go beyond today’s standard model of particle physics, which explains the behaviour of most known particles and forces. However, the simplest searches — those that are sensitive to the most glaring signs of new particles — have so far failed to turn up any evidence for it in the form of ‘extra’ events caused by those particles’ interactions. A more complex search this year for actual events in which a W boson was produced together with five jets of particles also failed to identify any such instances; these would be expected if supersymmetric particles were being created. The CERN team would next like to try to model events with six or even seven jets, Incandela says. “It’s just phenomenal to be able to look at events that complicated.”

Thus far, theorists have been paving the way for experimentalists. But Incandela expects that, eventually, data collected at the LHC will inform the explorations of theorists, allowing them to compare complex calculations of scattering with events actually seen in the machine. “They will need some reality check,” he says.