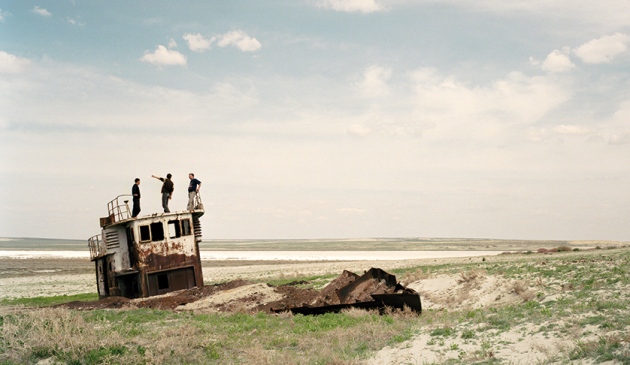 A boat rusts on the bed of the dried Aral Sea, more than 90% of which has vanished in the past 50 years.

Shipwrecks rusting in the desert have come to symbolize the environmental havoc that has befallen the Aral Sea, which straddles Kazakhstan and Uzbekistan. More than 90% of what was once the fourth-largest lake in the world has vanished in half a century1, 2, 3. The cracked shores are symptoms of the dramatic overuse of water in central Asia. Since the 1960s, 70% of Turkmenistan has become desert, and half of Uzbekistan's soil has become salty owing to dust blown from the dry bed of the Aral Sea1.

The republics of Uzbekistan, Tajikistan, Turkmenistan, Kyrgyzstan and Kazakhstan were developed as farming states to supply produce to the former Soviet Union1. Today, they are among the highest per capita users of water in the world — on average, each Turkmen consumes 4 times more water than a US citizen, and 13 times more than a Chinese one4 (see 'Top 20 consumers'). More than 90% of the region's water use is irrigating thirsty crops including cotton and wheat1, 2.

Decades of over-extraction have nearly sucked dry the Amu Darya and Syr Darya rivers that feed the Aral Sea. Local livelihoods that rely on livestock grazing, hunting and fishing have disappeared; ecosystems in the Aral's brackish waters, deltas, coasts, steppes and fertile river valleys have collapsed1. As water bodies have vanished, the local climate has become harsher: summers bring extreme heat and violent, salty dust storms; winters are more severely cold. The wind spreads salt and agrochemicals to farmlands hundreds of kilometres away, causing respiratory and gastroenterological diseases as well as anaemia, cancer and tuberculosis3, 5.

Struggling to shake off the Soviet legacy of environmental and political crises and oligarchies, these republics are more rivals than neighbours. Because most of the region's water bodies — mainly the Syr Darya, Amu Darya and Zarafshon rivers — are shared, political tensions have grown around water access, drawing worrying parallels with similar crises in the Arab world. 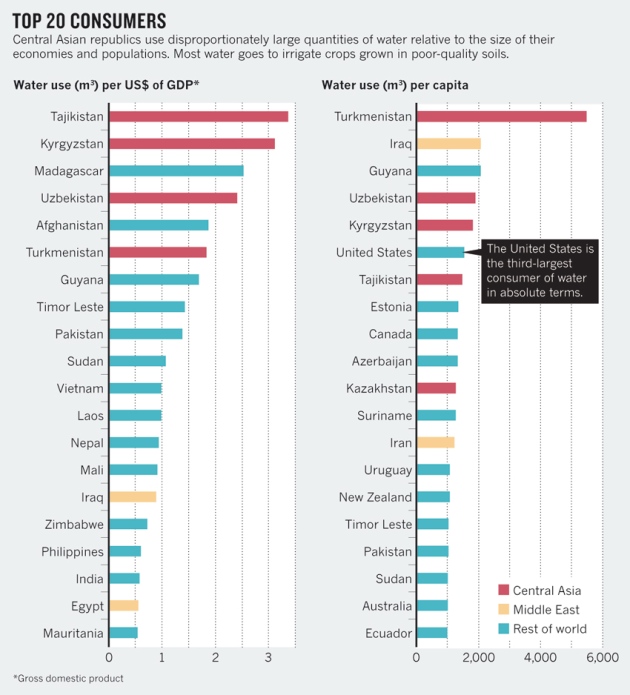 The first step is to recognize that the origin of central Asia's water problems is in excessive water demand. Fixing the problem will mean developing regional industries that are less water intensive and more profitable than agriculture, by tapping human potential rather than natural resources. Unless the region's economy can be put on a more sustainable footing, the stability and security of central Asia is in danger.

Two fallacies stymie debate about water in central Asia. The first is that the region is short of water. The landscape looks dry and rivers run empty. Many analyses in the past few years3, 5 have thus recommended water-conservation measures, assuming that incremental policy changes are all that can be delivered. In fact, these countries have plenty of water relative to their populations. The annual availabilities of fresh water per capita for the Amu Darya (2,087 cubic metres) and the Syr Darya (1,744 m3) river basins6 are well above the United Nations definitions of water shortages7: 1,000 m3 per capita constitutes a chronic shortage, and 1,700 m3 a moderate shortage. By comparison, Denmark has 1,128 m3 of water per capita, Germany 1,878 m3 and the United Kingdom 2,465 m3(ref. 4).

The second fallacy is that the solution is agricultural. Most analysts propose that water should be used more efficiently on farms because it is wasted in growing low-return crops on dry lands unsuitable for agricultural use. Turkmenistan's dry climate and poor soils mean that producing a tonne of wheat takes 2,000–4,000 m3 of irrigation water, whereas in nearby northern Kazakhstan adequate rainfall and conditions mean that no irrigation is needed. Even as its land became parched, Turkmenistan's wheat yield increased ninefold between 1992 and 2007.

But the big fish swims elsewhere: the agricultural share of gross domestic product (GDP) in central Asia has almost halved since the disintegration of the Soviet Union4. Instead, economic growth is dominated by the oil and gas industry and by urban expansion. Already, more than half of the region's population is urban and that proportion is rising.

The resulting problems are greater than just stagnant economies. Disputes (see 'Troubled waters') between nations have arisen around access to shared water bodies in the Fergana Valley in the Syr Darya river basin, in the Zarafshon river basin, and in Amu Darya — most notably concerning the Nurek dam and Turkmen–Uzbek rivalries on water appropriation. 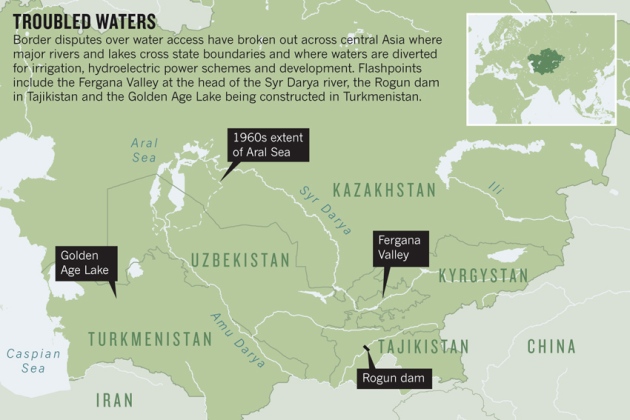 These tensions are stoked by absurd projects such as the Golden Age Lake (Altyn Asyr) in the Karakum Desert8, 9. Projected to cover almost half the area of the Great Salt Lake in Utah, the synthetic lake will be about six times its volume. Since 2000, Turkmenistan has been constructing it, claiming it will increase agricultural production and offer a “symbol of revival of the Turkmen land”, as former president Saparmurat Niyazov (known as Turkmenbashi) put it9.

Water for the lake will be drawn from the Amu Darya river through two canals, which are being cut across about 3,200 km of desert8, 9. Although it is unclear whether that much water can ever be sourced from the river, it is obvious that downstream, Uzbekistan will not accept those diversions and is ready to defend its water share with arms if necessary. The already serious soil-salinization problems of Turkmenistan and Uzbekistan will be greatly worsened if the project is completed.

Like most other parts of the former Soviet Union, central Asian states suffer authoritarian rule and political fragility. Soaring unemployment is leading to a mass emigration of educated people. Current figures estimate that up to one-third of working-age Tajiks are employed abroad. Ethnic, political and religious diversity and difficulties with boundary demarcation fuel nationalism. Internal hostilities, as in the Caucasus, Moldova and eastern Ukraine, are a threat. A full-scale regional conflict, regardless of the rise of radical religious groups, is not out of the question.

Central Asia's water crisis echoes that in the Middle East and North Africa, where political, economic and environmental issues are also intertwined. In Arab countries such as Syria, Yemen and Tunisia, water is scarce and used for low-value purposes, generating little income or investment10. Urban populations are fast-growing but ill-served by development policies focused on traditional rural and primary industries. Political and professional inertia makes change difficult. 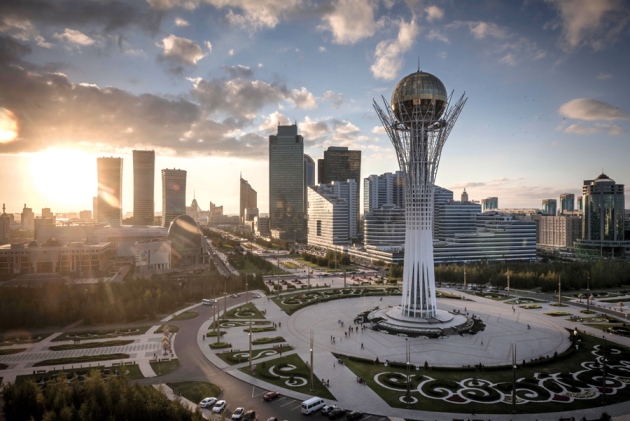 Three main differences may make the situation in the former Soviet republics worse than in the Middle East. First, investments in the central Asian water sector are even less productive and more conflict-prone than in Arab countries. Second, water is more abundant in central Asia but environmental disasters have been more severe there than in Arab countries. Third, Arab cities absorb immigrants more successfully and grow faster than those in central Asia, where skilled workers tend to emigrate to countries outside the region, notably Russia.

The central Asian countries must find joint interests and competitive advantages to build a new regional economy, with wise water use at its heart. These countries could have a much more conscious role in world politics and in the global economy by looking at their complementary strengths and merging their markets.

The human resources of central Asia are relatively untapped. The republics have essentially full adult literacy and well over 90% of adults have secondary education8. The nations are in a favourable geographical position between diverse markets, including China, Russia, the Middle East and Europe.

Different national strengths should be exploited: Turkmenistan is rich in oil, Tajikistan and Kyrgyzstan in hydropower, for instance. Urban economies, services, manufacturing and knowledge-intensive industries should be boosted by governance reforms.

Realizing human potential would require policies to attract investments, maintain and enhance high standards of education, help industries to grow, and empower a bigger share of the population to contribute to political decision-making. Inertia may be the real bottleneck.

International policy-makers and the water sector must refocus and look much more broadly at water's role in the region's political and economic development. That wider perspective should guide the next round of water-resources assessments, as well as top-level international policy meetings such as the 7th World Water Forum in Daegu, South Korea, in April 2015.

The alternative could be much worse: more iron wreckage on the drylands — this time of military origin.