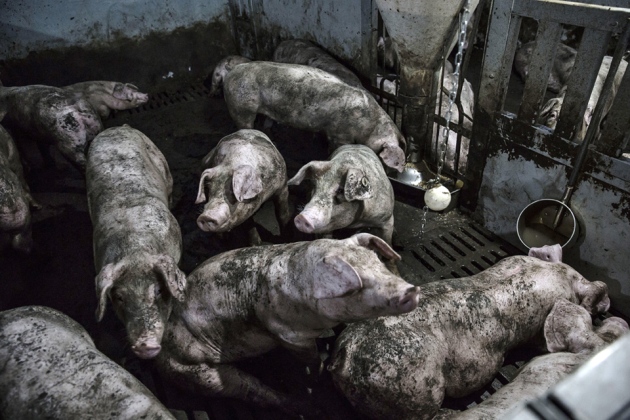 Overuse of antibiotics in livestock could be driving emergence of some antibiotic-resistant bacteria.

Eighteen months ago, a gene that confers resistance to colistin — known as an ‘antibiotic of last resort’ — emerged in bacteria from pigs in China. Since then, the resistance gene, called mcr-1, has been found around the world at an alarming rate, according to several presentations at the American Society for Microbiology (ASM) meeting in New Orleans, Louisiana, last week.

In some places, nearly 100% of farm animals carry mcr-1, and an increasing number of people do as well. The gene’s spread is one of the clearest examples of how antibiotic use on farms can lead to resistance in human infections, says Lance Price, an antibiotic researcher at George Washington University in Washington DC.

Colistin has been around since the 1950s, but was rarely used in people because it causes kidney problems. Instead, many countries use it to promote growth in livestock — a practice that seems to have selected for colistin-resistant bacteria. That’s a problem, because physicians have increasingly turned to colistin over the past decade to treat patients who don’t respond to other antibiotics.

“It’s a crappy drug and I think this is a sign of our desperation that we are so concerned about the loss of a toxic antibiotic,” says Price.

Colistin-resistance genes evolve naturally in bacteria, but public-health experts started to worry when researchers in China reported1 last year that mcr-1 had moved from the bacterial genome on to a plasmid: a circular piece of DNA that can hop between species of bacteria.

Some evidence suggests that plasmids carrying mcr-1 have existed on farms for decades, and that researchers are seeing the plasmid and the gene now only because they’re looking for them2. But their occurence does seem to be increasing.

An analysis of gut bacteria in 8,000 human faecal samples collected over five years from Guangzhou, China, discovered mcr-1 in 497 samples. It also found an increasing prevalence of the gene during that time, according to Guo-Bao Tian, a microbiologist at Sun Yat-sen University in Guangzhou, at the ASM meeting. Tian and his colleagues discovered that 10% of the mcr-1 genes showed up in strains of the gut bacterium Escherichia coli that were also resistant to other antibiotics.

In another study presented at the meeting, Tian’s group found mcr-1 in 25% of patients at a Guangzhou hospital in 2016. A strain of E. coli found in the samples also contained a gene called blaNDM-5 that confers resistance to carbapenems — another class of antibiotics of last resort.

Although the two genes were found on separate plasmids, it’s common for one plasmid to carry resistance genes for multiple drugs, says Catherine Logue, a veterinary microbiologist at Iowa State University in Ames. Treatment with one drug can select for bacteria with such plasmids, thus potentially increasing the amount of resistance to several drugs.

During one ASM presentation, Logue and her team reported finding resistance genes to carbapenems and to antibiotics from the class that includes penicillin. These were discovered in swab samples from 107 farmed chickens in Brazil — the world’s largest poultry exporter. About 60% of the samples had E. coli strains that carried mcr-1.

The prevalence of mcr-1 was even higher at two randomly chosen farms in Portugal: 98% of 100 healthy pigs researchers sampled harboured the resistance gene, said Laurent Poirel, an antibiotic-resistance researcher at the University of Fribourg in Switzerland, who also presented at ASM. He and his colleagues also found mcr-1 on three different types of plasmid and in multiple strains of bacteria, suggesting the pigs weren’t necessarily spreading the gene to one another but getting it from various sources. “We have no idea how it got there,” he says.

Logue and Tian also found mcr-1 in numerous different plasmids and strains of bacteria. The gene seems to be particularly good at jumping into different organisms, Logue says, which could make it very successful — and difficult to treat. If someone ate undercooked meat or worked with animals harbouring bacteria containing mcr-1, a person's gut microbes could theoretically acquire the resistance gene.

Price is astounded by the prevalence of mcr-1 found in these countries. Brazil banned colistin for agricultural use in 2016 while China followed suit in 2017, but Price isn’t sure how much that will curb the spread of these genes. He hopes that the mcr-1 case can serve as a wake-up call about the overuse of all antibiotics in farm animals.