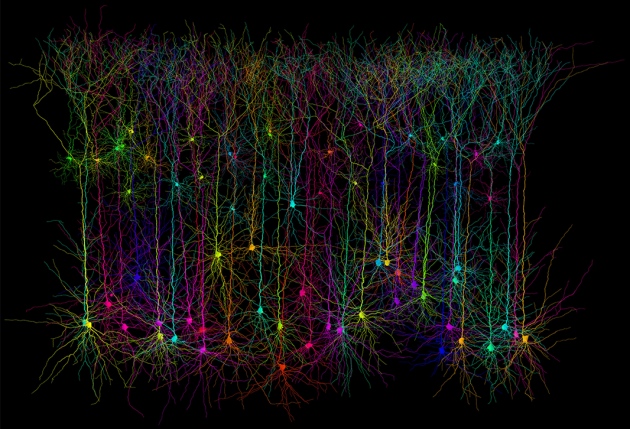 Leading neuroscientists are joining forces to study the brain — in much the same way that physicists team up in mega-projects to hunt for new particles.

The International Brain Lab (IBL), launched on 19 September, combines 21 of the foremost neuroscience laboratories in the United States and Europe into a giant collaboration that will develop theories of how the brain works by focusing on a single behaviour shared by all animals: foraging. The Wellcome Trust in London, and the Simons Foundation in New York City have together committed more than US$13 million over five years to kick-start the IBL.

The pilot effort is an attempt to shake up cellular neuroscience, conventionally done by individual labs studying the role of a limited number of brain circuits during simple behaviours. The ‘virtual’ IBL lab will instead ask how a mouse brain, in its entirety, generates complex behaviours in constantly changing environments that mirror natural conditions.

The project will use chips that can record the electrical signals of thousands of neurons at once. It will also use other emerging technologies, such as optogenetics toolkits that control neurons with light. “It’s a new approach that will likely yield important new insights into brain and behaviour,” says Tobias Bonhoeffer, a director of the Max Planck Institute for Neurobiology in Martinsried, Germany, who is also a Wellcome Trust governing-board member.

Large-scale neuroscience projects are hardly rare. In 2013, the European Commission announced the 10-year Human Brain Project, which will cost more than €1 billion ($1.1 billion); and in 2014, US president Barack Obama launched the US Brain Initiative to develop neuro-technologies, with $110 million of funding that year. The Allen Institute for Brain Science, in Seattle, Washington, has been creating comprehensive maps of brain anatomy and neural circuitry since 2003. Japan, China, Canada and other countries also have, or are planning, their own big neuroscience initiatives.

But none operates quite like the IBL, which will be governed in a similar way to large-scale physics projects such as ATLAS and CMS, at Europe’s particle-physics lab CERN, which reported evidence for the Higgs boson in 2012. The two collaborations, at CERN’s Large Hadron Collider near Geneva, Switzerland, brought together experimentalists and theoreticians from hundreds of labs worldwide to test the predictions of particle physics’ standard model.

Like the massive CERN teams, the IBL has created a flat hierarchy and a collaborative decision-making process with near-daily web meetings. Instead of acting only when group consensus is reached, teams will make decisions by simple consent. “No one will be able to stop a proposed experiment being carried out without a very convincing proposal of why it would be a disaster,” says Alexandre Pouget, an IBL member and a theoretician at the University of Geneva in Switzerland.

So far, says Andreas Herz, a theoretical neuroscientist at the Ludwig Maximilian University of Munich, Germany, "neuroscience has been stuck in an exploratory phase". The IBL will aim to generate and test unifying theories about how the brain encodes and computes information – seeking to come up with the equivalent of physicists’ standard model.

But the IBL is hardly unique among big neuroscience projects in melding theory and practice, points out neuroanatomist Katrin Amunts at the Jülich Research Centre in Germany. Amunts also chairs the scientific board of Europe’s Human Brain Project, an initiative that is taking a more conventional approach to collaboration in its own attempts to understand how the brain works. “The future will show which is the best,” she says.

The IBL’s principal investigators, who include data-analysis experts as well as experimental and theoretical neuroscientists, will dedicate around 20% of their time to the effort. During its first two years, the IBL will build informatics tools for automatic data-sharing and establish a reliable experimental protocol for a basic foraging task in mice. Members will be required to register their experiments before they start, and results will be instantly visible to the whole collaboration.

“It is a big challenge — and it’s not the way the field works at the moment,” says Anne Churchland, an IBL member at Cold Spring Harbor Laboratory, New York.

In experimental neuroscience, the slightest parameter change can alter the outcomes of the experiment. The IBL’s standard protocol attempts to address all possible sources of variability, from the mice’s diets to the timing and quantity of light they are exposed to each day and the type of bedding they sleep on. Every experiment will be replicated in at least one separate lab, using identical protocols, before its results and data are made public.

“This sort of approach will help solve the reproducibility crisis,” says Christof Koch, president of the Allen Institute for Brain Science.

Expanding the IBL beyond its pilot phase will require much more than $13 million, Pouget acknowledges. After the foraging protocol is established, the project’s second phase will test specific theories relating to how the brain integrates diverse information to make moment-by-moment decisions. He also hopes to enrol many more labs and broaden the suite of behaviours studied.

For Herz, a theoretician who is part of an influential computational-neuroscience network, it’s about time neuroscience adopted such rigour. “A hundred years from now,” he says, “people will look back and wonder why it hadn’t, until now, been possible to do a more physics-based approach of designing experiments to consolidate or disprove theories.”

An earlier version of this article mis-stated the total funding for the International Brain Lab.

An earlier version of this story erroneously located the Simons Foundation in Washington DC.