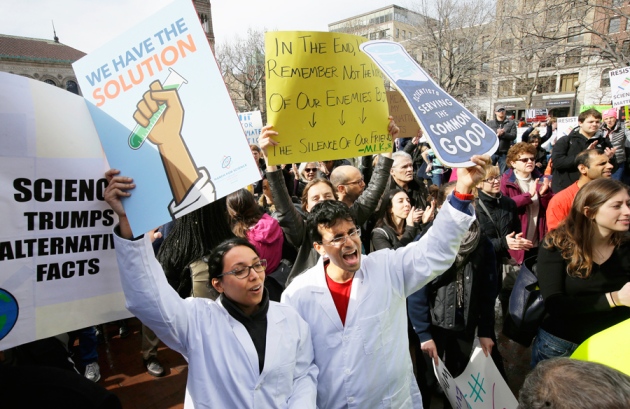 Researchers at the AAAS meeting in Boston took to the streets to stand up for science.

One question dominated discussions at the annual meeting of the American Association for the Advancement of Science (AAAS) at the weekend. Researchers, journalists and science lobbyists squeezed into conference rooms, perched on recycling bins and sat on the floor between rows of filled chairs as they strained to listen to those who tried to offer a response. The question was phrased in various ways, but the variations all boiled down to: how should science and scientists respond to the administration of President Donald Trump?

The answers were numerous too — from political activism to better communication — and were met with cheers, applause and the odd standing ovation. Many scientists will have left the Boston conference with renewed hope, or at least a sense of combined purpose. They had an answer of sorts to their question.

But it’s the wrong question. It is not Trump that scientists must respond to. The real question is what science can do for the people who voted for him. Exactly who did support him, and why, is still being debated by political scientists, but it’s clear that many of those who voted Trump are those he canvassed in his campaign and credited in his inauguration speech. It is people who feel left behind by supposed progress and who have suffered a real or perceived collapse in their quality of life.

One speaker at the AAAS meeting appropriately sharpened the challenge. There are two types of taxpayer: those who pay up voluntarily because they believe in the public good that the money generates, and those who pay only because they will be put in jail if they don’t. How many scientists, he suggested, could confidently say their project was so important to people that those people should be thrown into prison for not supporting it?

Just telling the same old stories won’t cut it. The most seductive of these stories — and certainly the one that scientists like to tell themselves and each other — is the simple narrative that investment in research feeds innovation and promotes economic growth. ‘It’s the economy, stupid’, so the saying goes, and as nations become a little less stupid by pushing against the frontiers of knowledge, so the benefits of all this new insight spread from the laboratory to the wider population, as improvements in the standard of living and quality of life.

This comfortable story has all the hallmarks of a bubble waiting to pop. For a start, it always has a happy ending. The hero of various quests, science slays the dragon of childhood disease and retrieves the elixir, if not of everlasting life, then at least of increased lifespan. And ,like all good stories, this one comes with a pleasing twist: for when it sets off on its quest, science does not know exactly which good deeds it is planning to perform. Pure of heart and research, it is merely enough to send our science hero out into the world, with its consumables, overheads and a postgraduate squire paid for by donations from a grateful and trusting public.

This narrative is truthful enough to have sustained itself for many decades. From the famous discovery of the apparently useless laser that launched uncountable applications to how Einstein’s theories of relativity underpin the Global Positioning System — these stories indeed make a case to Trump and his supporters that continued investment in science will help to create companies and jobs.

“The needs of millions of people in the United States are not well enough served by the agendas and interests that drive much of modern science.”

But as this journal and others have pointed out, it is also clear that the needs of millions of people in the United States (and billions of people around the world) are not well enough served by the agendas and interests that drive much of modern science. There are plenty of reports that show, for example, how public investment in the Human Genome Project has paid off many times over and created firms and jobs, but rather than trickling down through society, these benefits of discovery science arguably deepen the pools of wealth and privilege already in place — creating expensive new drugs that most people cannot afford.

It is right that more scientists should tell stories of the good their research can do. But it is more important and urgent than ever that researchers should question how these stories really end — and whether too many of the people they claim to act for don’t really get to live happily ever after. Equally, they should focus more effort on how science education and scientific research can help the many whose jobs are going to be displaced by the very inventions that scientists are producing.

As they ponder their next move in response to the election of Trump, science organizations — universities, funders, supporters and the rest — should look harder at social problems and opportunities, and seek ways for science to help.

For example, some universities are increasingly engaging in climate-change adaptation. There will be employment opportunities in creating companies that help cities and other regional communities to protect themselves from climate change (whatever the sceptics may be saying), stimulated by the readily applicable and intellectually stimulating insights and improved decision-making that research will deliver.

More universities, for example, could follow the example of Michigan State University in East Lansing, in building stronger links with their local communities, and seeking to work with them to tackle research problems that affect their quality of life. These include monitoring soil and water quality, for example, and addressing the challenges of regional demographics, such as the large numbers of elderly people who live alone in some regions and how to deliver health care to them.

There is also a need to tell these stories compellingly — stories that are harder to tell and of less global impact than the hunt for fundamental particles or new materials. And the most important audiences may not be inclined to listen. But those audiences matter.