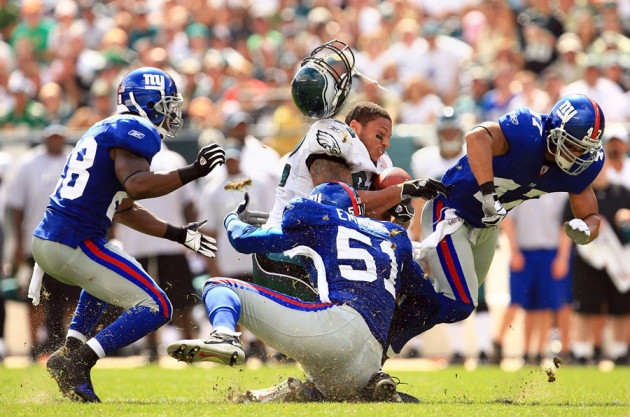 Repeated head injuries in American football have been linked to a degenerative brain disorder later in life.

Dave Duerson suspected that something was wrong with his brain. By 2011, 18 years after the former American football player had retired from the Phoenix Cardinals, he experienced frequent headaches, memory problems and an increasingly short temper. Before he killed himself, he asked that his brain be donated for study.

Researchers who examined it found signs of chronic traumatic encephalopathy (CTE), a degenerative condition linked to repeated head injuries. At least 69 cases have been reported in the literature since 2000, many in former boxers and American football players (P. H. Montenigro et al. Alz. Res. Ther. 6, 68; 2014) — heightening public concern about concussions during contact sports. Yet much about CTE is unknown, from its frequency to its precise risk factors and even whether its pathology is unique.

Researchers now hope to take a major step towards answering those questions. At Boston University in Massachusetts on 25–27 February, neuroscientists will convene to examine the characteristics of CTE in brain tissue from post-mortem examinations. They hope to agree on a set of diagnostic criteria for the disease, and to assess whether it is distinct from other brain disorders, such as Alzheimer’s disease.

The effort is sorely needed, says Walter Koroshetz, acting director of the US National Institute of Neurological Disorders and Stroke in Bethesda, Maryland, which is organizing the meeting. “The definition is the important piece that lets you do the rest of the research,” he says. And the stakes are high. CTE is associated with memory loss, irritability, depression and explosive anger, which are thought to appear and worsen years after repeated head trauma. Research by Ann McKee, a neuro­pathologist at Boston University, suggests that CTE often occurs alongside Alzheimer’s disease and other neuro­degenerative disorders. “I think this disease is more common than traditionally recognized,” she says.

Such research helped to spur a major lawsuit against the US National Football League (NFL) over its handling of head trauma, involving some 4,500 former players and a potential settle­ment of more than US$765 million. The findings have led researchers worldwide to examine the risks of head trauma in other sports, including professional rugby and amateur soccer.

To make CTE studies more systematic, McKee has proposed pathological criteria and disease stages defined by the severity of a person’s symptoms (A. C. McKee et al. Brain http://doi.org/2dc; 2012). CTE often involves deterioration of white matter in the brain, as well as abnormal aggregation of a DNA-binding protein called TDP-43 — which is also implicated in amyotrophic lateral sclerosis. But McKee says that CTE’s most striking feature is the clumped distribution of an abnormal, hyperphosphorylated form of a protein called tau that normally helps to stabilize the internal structure of cells.

Tau deposits are found in the brains of elderly people and in those with Alzheimer’s disease — leading some sceptics to question whether CTE is a distinct disorder. And critics such as Christopher Randolph, a neuropsychologist at Loyola University Medical Center in Maywood, Illinois, worry that CTE research has a basic sampling bias. The brain banks that support many CTE studies largely rely on tissue donated by players or their families, who often suspect that the individual had a severe neurological problem. This tips the balance towards those who may have various brain disorders.

Mistaking other conditions for CTE could have serious consequences, says Randolph, who worked with the Chicago Bears NFL team until 2002. “If you are in the grips of major depression, your actions may be different if you believe you have a fatal neurodegenerative disease and you’re just going to get worse, versus believing that you have a treatable illness,” he says.

McKee acknowledges the sampling bias but says that acquiring donated tissue from healthy individuals will take time, because relatively few people request post-mortems in the absence of a visible problem. But she is convinced that many of the athletes’ brains that she has received show an unmistakable signature that includes concentrations of hyperphosphorylated tau around blood vessels, especially in the furrows of the cerebral cortex. This is a departure, she says, from the more-uniform tau deposition seen in diseases such as Alzheimer’s.

At the meeting, researchers will put these potential CTE signatures to the test. McKee and her team have prepared images of tissue slices from 25 brains from multiple brain banks. The sample, from players and non-players, includes suspected cases of CTE and known cases of Alzheimer’s disease and other tau-based disorders. Neuropathologists will evaluate the images without information on the subjects’ personal or medical histories, and will present their blinded diagnoses at the event.

If reliable neuropathological criteria can be found for CTE, researchers hope to use them to re-examine medical records from other deceased patients. Currently, many of the psychological symptoms associated with CTE are difficult to distinguish from other disorders, and brain-imaging tests for CTE are still in early development. Universal criteria for detecting CTE in donated brains could help scientists to search for other signatures so that physicians can diagnose the disease in living people.