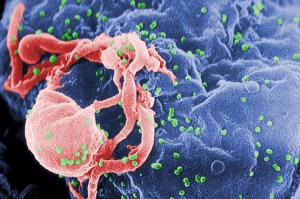 Broadly neutralizing antibodies developed in an HIV-infected patient after the virus (shown here in green, budding from a lymphocyte) began to mutate and diversify.

For the first time, scientists have tracked in a patient the evolution of a potent immune molecule that recognizes many different HIV viruses.

By revealing how these molecules — called broadly neutralizing antibodies — develop, the research could inform efforts to make vaccines that elicit similar antibodies that can protect people from becoming infected with HIV. The researchers, led by Barton Haynes of Duke University School of Medicine in Durham, North Carolina, found that broadly neutralizing antibodies developed only after the population of viruses in the patient had diversified — something that had been suspected of occurring in patients, but had not actually been observed. The team reports its findings on Nature's website today1.

“This is a really beautiful demonstration,” says William Schief, a protein engineer specializing in vaccine design at the Scripps Research Institute in La Jolla, California. “It poses the question for the vaccine-design field of how much of that viral diversity we need to incorporate into our vaccine regimens to try to elicit broadly neutralizing antibodies.”

HIV mutates so frequently that it has been extremely difficult to design vaccines that recognize enough forms of the virus to be effective. For the past decade, HIV-vaccine designers have tried to make progress by studying broadly neutralizing antibodies, hoping to understand what gives these molecules their ability to bind to and recognize many different HIV viruses.

But getting human cells to make broadly neutralizing antibodies has been more difficult than researchers expected, because they are unusually complicated and normally evolve their potency against HIV long after the virus has established its infection in the body.

The antibody that Haynes and his colleagues describe today, dubbed CH103, recognizes fewer HIV viruses than some other broadly neutralizing antibodies, such as those in a class called VRC01. But CH103 is also less complicated than previously reported antibodies, and Haynes’s team hopes that this will make it easier to elicit with a vaccine.

“A message of our paper is that broad neutralizing antibodies don’t have to be as complicated as we thought, and therefore may be more easily induced,” says Haynes.

The team found CH103 in the patient 136 weeks after infection. The researchers then went back to archived samples of the patient’s blood and looked for similar antibodies and for copies of the virus that were present in the patient during the course of his infection. By doing so, the team was able to track the antibody and the virus as they co-evolved and to detect the ancestral form of the antibody — the 'germline precursor' produced by immune cells called B cells — that underwent maturation to become a neutralizing antibody. This could help Haynes’s team to design vaccine proteins known as immunogens that could trigger the body to evolve neutralizing antibodies like CH103.

Separately, a team led by Schief reported2 on 28 March that it had engineered an immunogen that binds to VCR01 neutralizing antibodies. The researchers used structure-based computational design and a screening method to pick out immunogens capable of recognizing many different VRC01 germline precursors.

The field's next challenge, Schief says, will be to find out whether such immunogens can elicit germline precursors to CH103, VRC01 or other neutralizing antibodies in people, or in mice with humanized immune systems.

“The big question now is, once one has activated that germline B cell, how does one get that B cell to undergo maturation to produce a broadly neutralizing antibody?” Schief says.

Both Schief and Haynes say that the field will probably need to find ways to simulate the burst of viral diversity that may be necessary to spur that maturation process — perhaps by vaccinating with combinations or series of different immunogens.

“Immunizing with a one-structure envelope is probably not going to fit the bill,” Haynes says.