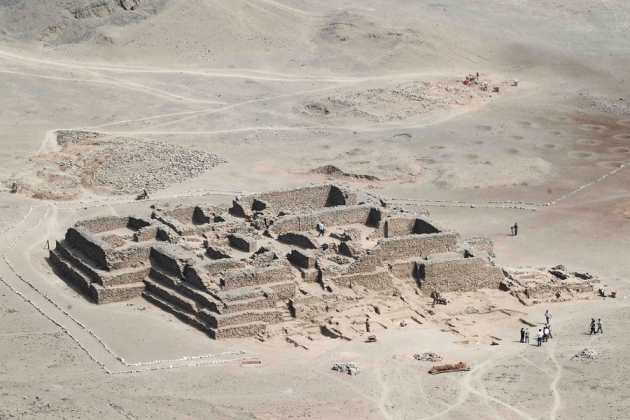 One of the pyramids that are still standing at El Paraíso, a site that may be as many as 5,000 years old. In late June, a construction crew razed another, incompletely excavated pyramid to the ground.

The recent destruction of a 4,000 year-old pyramid in Peru highlights the challenges of preserving the country's rich heritage.

The pyramid, located at the El Paraíso archaeological site, was one of the oldest in Lima's metropolitan area and an outstanding example of early cultures that preceded the rise of the Nazca culture and the Inca Empire.

Unidentified construction workers entered the site on 29 June and deliberately tore down the 6-metre-tall pyramid, according to Peru's Ministry of Culture.

The structure was one of 12 pyramids at the site, and had only been partially excavated. Archaeologist Marco Guillén, who is leading excavations at the site, says it is believed that only the bottom one-third of the pyramid still lies underground. The part that was visible looked like a mound but had “clear signs” of the building beneath, says Miguel Díaz, a spokesman at the Ministry of Culture.

On 2 July, the Ministry of Culture filed criminal complaints against Alicia Romaní Vargas, owner of two construction firms, whose employees allegedly razed the pyramid. If convicted, she could face up to eight years in prison. The ministry will also seek a fine of 3.7 million soles ($1.3 million), says Díaz. Authorities have also charged the workers who took part in the demolition, but no arrests have been made.

The damage is “irreparable”, says the ministry, as the perpetrators levelled the area and burnt trash on top of the rubble to disguise their act as 'site cleaning'. The workers were stopped by police before they could bulldoze three other similar structures at the 50-hectare national heritage site.

“This is equivalent to burning ancient books that we would never be able to extract knowledge from,” says archaeologist Ruth Shady, director general at the Caral Archaeological Zone, another ancient site 90 miles north of El Paraíso.

Like other El Paraíso structures, the ravaged building was contemporary with the cities of ancient Sumer in what is now the Middle East, and with Egypt's earliest pyramids, says Jeffrey Quilter, an archaeologist at Harvard University in Cambridge, Massachusetts, who excavated the site between 1983 and 1985. “That’s how important it was.” In 1991, ancient food remains found at El Paraíso’s central pyramid by Quilter and other archaeologists were instrumental to showing that fish and seafood were key to the rise of Peru’s early civilizations1.

The Peruvian government resumed excavation of the central pyramid in late 2012 and early this year a ritual hearth was found dating from between 4,000 and 5,000 years ago, according to the Ministry of Culture.

This is not the first time that Peruvian archaeological sites have been ravaged in recent years. Monuments and other archaeological remains have been wiped out, built on, lived in by poor families or turned into landfill. “For years now laws have been in place to punish the destruction of cultural heritage with several year’s imprisonment, but I don’t know of a single conviction yet,” says Shady, who has worked at Caral for 19 years. She says that at Caral alone her group is involved in 20 court actions related to damage to archaeological structures and property claims by local landowners.

Now, the demolition at El Paraíso may finally spur some change. “The destruction of the pyramid has sparked an enormous social and political reaction of anger in Peru, so it should be an important step towards a real protection of the country’s heritage”, says Shady.