One in five academics in a variety of social science and business fields say they have been asked to pad their papers with superfluous references in order to get published. The figures, from a survey published today in Science1, also suggest that journal editors strategically target junior faculty, who in turn were more willing to acquiesce.

The controversial practice is not new: those studying publication ethics have for many years noted that some editors encourage extra references in order to boost a journal's impact factor (a measure of the average number of citations an article in the journal receives over two years). But the survey is the first to try to quantify what it calls 'coercive citation', and shows that this is “uncomfortably common,” according to authors Allen Wilhite, an economist, and Eric Fong, who researches management, both at the University of Alabama in Huntsville. 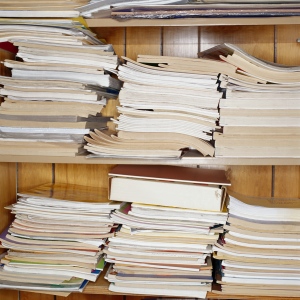 Some editors ask researchers to add citations to their journal as a condition of publication.

But experts in journal practices say that although there’s no denying that coercive citation does happen, the survey's figures are surprisingly high. “If this is true, it would be a serious indictment of the publication process. I am not seeing data across a swathe of citations that would support that high rate,” says Marie McVeigh, director of Thomson Reuters’ annual Journal Citation Reports, which publishes impact factors.

Fong became interested in the problem when he was asked by a journal editor to cite more articles from that journal as a condition of publication. “Until this happened to me, I had never heard of such a thing,” he says. He and Wilhite asked around, and found that some people were familiar with the practice, while others were “absolutely stunned. There was no in-between”, says Wilhite.

So Wilhite and Fong asked more than 54,000 academics in the social-science and business disciplines whether they had heard of the practice, and whether in the past five years they had been pressured to add more citations to their papers for reasons not based on content. Of the 6,672 respondents, only 40% said they were aware of the practice. But half of those — 20% of the total — said that they had experienced it directly. Assistant professors were 5.5 percentage points more likely to be coerced than higher-ranking professors, and marketing, finance and information systems were the worst-offending disciplines.

“All of us who work in the area of publication ethics are aware of this — but it is surprising to me that so few scientists are aware of it. It means you have a lot of people out there who don’t know what to do when an editor calls up,” says Nicholas Steneck, director of research ethics and integrity at the University of Michigan in Ann Arbor.

Phil Davis, a scholarly-publishing consultant based in Ithaca, New York, worries that survey biases may have affected the numbers — for example, that the people who responded were more likely to be aware of the issue already, or that the introductory letter sent out with the survey may have primed respondents to recall instances of an editor asking for more citations as coercive behaviour. But "ultimately you can say that the behaviour exists and that it’s a problem at a few journals — no one would argue with that,” he says.

Perhaps the most striking finding of the survey was that although 86% of the respondents said that coercion was inappropriate, and 81% thought it damaged a journal's prestige, 57% said they would add superfluous citations to a paper before submitting it to a journal known to coerce. “From the researcher’s perspective, adding extra citations to a bibliography is relatively harmless,” says Steneck — whereas arguing with the editor means sticking out one's neck for little benefit. Fong, who was just a few months away from tenure, took the easier path: “I just added the number of citations they requested and moved on,” he says. 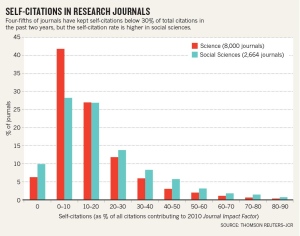 Academics were invited to name and shame specific journals, but only 480 did, naming 175 different journals (although many were named only once). At the top of the list is the Journal of Business Research (JBR). Its editor Arch Woodside says that he does ask authors to discuss and cite relevant JBR articles if they exist — but this is not what Fong and Wilhite define as coercive citation, wherein editors request more references to a specific journal without mentioning any particular article. The apparent discrepancy points out the large grey area that exists between coercion and advice on useful articles to add. Shankar Ganesan, who took over as editor-in-chief of the second-most-named publication, the Journal of Retailing, in September 2011, says that he does not condone or practise coercive self-citation.

Wilhite says that he would like for Thomson Reuters to remove journal self-citations from its impact-factor calculation altogether, so that editors will have no incentive to try to accrue self-citations — by either encouragement or coercion. But McVeigh says that this would be a fundamental change to the impact-factor calculation, to “respond to something that has not shown itself to be a huge problem”.