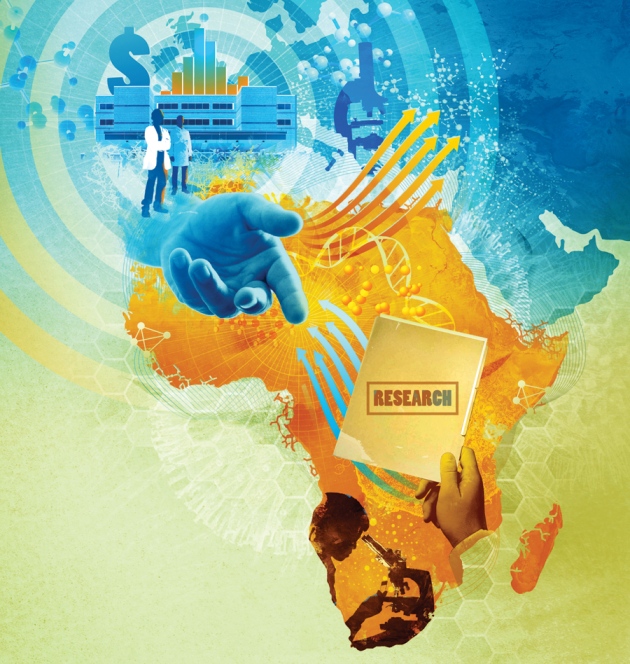 The gavel fell at precisely midday on 18 July 2014. Ruling on a lawsuit lodged against the Kenya Medical Research Institute (KEMRI), the Nairobi Industrial Court agreed that six Kenyan doctors in an international research partnership had been systematically passed over for promotion and training, whereas their European colleagues had flourished.

It was a landmark case — and not just because the judge ordered KEMRI to pay each of the doctors 5 million Kenyan shillings (US$56,000) to compensate for their stymied careers. It was also perhaps the first time that African researchers had so strongly — and so publicly — voiced resentment of their perceived second-class status in partnerships with foreign colleagues.

Collaborations have proliferated in recent decades as international agencies have stepped up funding for health research in Africa. Yet African scientists say that they often feel stuck in positions such as data-collectors and laboratory technicians, with no realistic path to develop into leaders.

“I think it's a big problem,” says Marcel Tanner, director of the Swiss Tropical and Public Health Institute in Basel. And when partnerships fail, he says, it is often the people from developing countries who have the most to lose. “They don't have the support to see them through changes of funder or projects.” This happened, for example, in 2010, when French backers had to withdraw from a malaria-control project in Côte d'Ivoire because of civil war. As a result, African staff members were left with a half-built laboratory, no way to pay the people they had employed and no funds to continue the project.

To try to give African scientists more independence, several global funders are testing ways to build research leadership in Africa, and are transferring some ownership of their own projects there to local scientists. In the works for later this year is a 'fairness index', in which institutions and funders will earn certificates for engaging in equitable partnerships.

But there is still a long way to go, says Glenda Gray, president of the South African Medical Research Council (SAMRC) in Cape Town. No matter how hard African scientists struggle for control of the research agenda, she says, they will not fully succeed until their own governments start to pay their share. International funders do sometimes still act as “neighbourhood bullies” in Africa, she says — “but it's easy to be strong when you have money”.

Swim against the tide

The roots of these unequal partnerships lie in how modern research began in Africa — generally with European nations that opened research stations in their colonies to study economically important issues, such as tropical diseases, crops or agricultural practices. As the centres grew, Africans were recruited first as assistants and then as scientists. But even after countries such as Tanzania and Kenya became independent in the 1960s, the most influential research centres there were often funded, led or at least heavily influenced by partners in wealthier countries.

By the mid-1990s, however, researchers both in Africa and in the developed world were voicing concerns about 'helicopter science' or 'sample safaris', in which foreign scientists were coming to Africa and collecting samples — often with local scientists' help — before going home to analyse them and write up their findings, giving little or no credit to their African counterparts. In 2001, for example, Kenyan researcher Moses Otsyula claimed that scientists from the University of Oxford, UK, stole blood samples that he had collected from unusually HIV-resistant children at a Nairobi orphanage. The Oxford scientists called it an inadvertent error of miscommunication, saying that they thought they had permission at the time.

These misunderstandings are becoming rare as foreign scientists grow more sensitized to ethical issues, and as African scientists realize the need for clearer rules governing sample collection and export. Yet inequitable partnerships remain a problem. In a survey published last year, the European Association of Development Research and Training Institutes in Bonn, Germany, found that the role of partners in Africa and other developing regions was “often still primarily limited to collecting data”, whereas partners from the developed world played a leading role in analysing and publishing the findings (see go.nature.com/42xjns). Some of the people interviewed for the study said that, even for developed-world scientists who want to build more-equitable partnerships, the mounting pressure to publish articles to advance their careers often leaves them no time to do so.

“Nobody wants to be a token scientist.”

Many African scientists have had personal experience with problematic partnerships. Some describe being shut out of collaborations that they helped to set up, whereas others talk about running projects on the ground as their developed-nation colleagues fly in and out — often combining a little work with a lot of tourism. But few are prepared to make their stories public because that might mark them as troublemakers and cut them off from future funding.

“There are good and bad relationships, and all of us have had them,” says Gray. Although her council spends roughly US$9 million a year on health research — one of the biggest such budgets on the continent — that figure is only about one-fifth of what the US National Institutes of Health spends in South Africa.

Still, she says, overseas funders are increasingly willing for African agencies such as hers to influence the agenda. The SAMRC has made steps towards that. In 2013, for example, it began to combine its funding with that of international donors to create joint-funding pots in which both groups have a say in what they support.

There has definitely been progress in recent years, agrees Kevin Marsh, who until last year headed a partnership between KEMRI and the UK Wellcome Trust, known as KWTRP. During his tenure, he battled fiercely with funders to improve the conditions for Africans who are working for the collaborative programme. At one point, Marsh says, he nearly resigned when the funders did not want to provide equal salaries to UK and African staff.

But even though there are many more prominent African researchers today than there were 20 years ago, he says, it is important not to overstate the gains. That is why he is helping to set up the Alliance for Accelerating Excellence in Science in Africa (AESA), a research-management hub in Nairobi, that African presidents will launch in June. Designed to manage outside funding for programmes in Africa, AESA has start-up support from several major organizations, ranging from the KWTRP to the policy-making body New Partnership for Africa's Development, headquartered in Pretoria.

Another project is the COHRED Fairness Index, which takes its name from its leading sponsor, the Council on Health Research for Development (COHRED) in Geneva, Switzerland. The index will permit institutions, funders or other groups involved in research to receive certification if they engage in good partnerships. Organizations can use this certification as a label to signify their status, in the same way that manufacturers put symbols on their goods to mark them as eco-friendly. A funder might get high marks if its programmes target a developing-country's national research priorities or its burden of disease, says Najia Musolino, a senior specialist with COHRED who is working on the index. Conversely, a health or science ministry in a developing country might get a bad rating if it does not regularly set or update national research priorities.

The index is expected to enter a trial period towards the end of this year and, if successful, could be extended to research areas other than health. Musolino says that funders and academic institutions in Africa and abroad have offered cautious expressions of support, and think that the index could help African researchers to choose good partners.

Gray says that the index will succeed only if developing-country researchers get a voice in how it works — and if African countries start to put more money into health research, so that their scientists have a stronger base from which to negotiate partnerships. That argument resonates with other African scientists, who want nothing more than to be accepted as equals. “Nobody wants to be a token scientist,” says Kenyan immunologist Faith Osier, who works with the KWTRP. “It's true that African scientists face disadvantages,” she says. But at the end of the day, she wants her contributions to be judged on merit — not on anything else.

Some African scientists think that it is wrong to place all the blame for inequalities in Africa's research landscape on international funders. “It is pointless to say to the United States that 'you should fund our scientists, but we should tell you what you should do'. That, to me, is hypocritical and disrespectful, of not just the funders, but also of their own local scientists,” says Salim Abdool Karim, director of the Centre for the AIDS Programme of Research in South Africa in Durban. “What we need is for African scientists to understand, appreciate and promote excellence as a mechanism by which they can deal with international researchers on a collegial basis, not on a neocolonial basis.”

Many of the affected researchers agree with Gray that a key missing factor is national government commitments to science. Despite promises of increased funding by many African governments over the past decade — in Kenya, Nigeria, Tanzania and South Africa among others — few have fulfilled their stated ambitions. “We should look critically at ourselves first and foremost before we start blaming funders or European universities,” says Kelly Chibale, a Zambian biochemist who heads a drug-discovery unit at the University of Cape Town, South Africa. “Unless — and until — we create good local infrastructure and a supportive local environment, we will continue to struggle.”