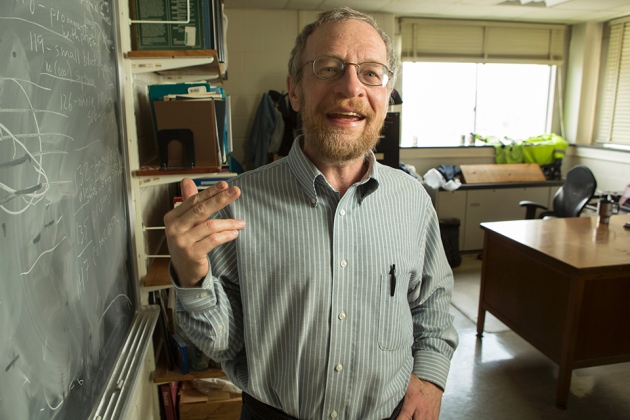 Will Yurman for Nature

Richard Alley is a geologist — and a Republican — who studies climate change.

When physicist Michael Stopa decided to run for the Massachusetts state senate in 2010, he didn’t expect much encouragement from his “overwhelmingly liberal” colleagues at Harvard University in Cambridge. He was acutely aware of his minority status as a conservative Republican on campus, and avoided talk of politics in his role as a staff scientist in a nanotechnology lab. Then the university newspaper wrote about Stopa’s campaign — and closeted Republicans around campus began to reveal themselves with quiet messages of support.

“A lot of people snuck over and said, ‘Hey, I hear you’re a Tea Party guy. I am too,’” says Stopa, who lost the election and eventually left academia, but has stayed active in Republican politics. He rejects the idea that his party is anti-science, arguing that “you can find rubes and lunatics on either side” of the US political divide.

But that idea has become a hard sell on many US university campuses, putting Republican researchers in an uncomfortable position, despite their party’s history of strong support for science. Between 1976 and 2013, one study found, US government research and development spending was highest under Republican presidents (S. Kushi J. Sci. Pol. Gov. 7, 2015). Yet during that period, party leaders rejected mainstream climate science, opposed environmental protections and sought to ease regulation of medicines.

Republicans’ anti-science reputation seems to have deepened under President Donald Trump, who has embraced ‘alternative facts’ and proposed steep spending cuts for the National Institutes of Health (NIH) and Environmental Protection Agency (EPA), among others. On 22 April, thousands of protesters are expected to attend the March for Science in Washington DC. Organizers describe the event — one of more than 500 planned for around the globe — as non-partisan, but it has sparked concern that it could politicize science and alienate Republican politicians.

Many Republican scientists who spoke to Nature say that they don’t talk politics in the lab, because they are afraid that discussing economic policy or the role of government could damage their friendships or even their careers. And some worry that by supporting the party of Trump, who has been accused of racism and misogyny, they risk being tarred by association.

“It’s become increasingly difficult over the past few decades for scientists to call themselves Republican as part of their core identity,” says Katharine Hayhoe, an atmospheric scientist at Texas Tech University in Lubbock — and an evangelical Christian who has spoken about her experiences as a member of a minority group in science. “The Republican party has been moving further and further away from recognizing the neutrality of science,” she says. “Now it’s reached a peak.”

The small body of research on US scientists’ political affiliations suggests that Republicans are indeed a minority in universities. A 2009 poll of the American Association for the Advancement of Science’s members, who are mostly academics, found that only 6% identified as Republican. Fifty-five per cent of respondents said they were Democrats and 32% were independents. And a 2014 survey by researchers at the University of California, Los Angeles, found that outside of mathematics, economics and engineering, academic scientists in the United States overwhelmingly identified as liberal.

The causes of this ideological divide are murky. Politically conservative scholars may drop out of academia because they feel unwelcome, or just because they are drawn to jobs with better pay and shorter training periods, says Richard Alley, a Republican and a geologist at Pennsylvania State University in University Park.

What is clear is that conservative and liberal scientists have trouble engaging with each other, says a biologist at a public university in the midwestern United States, who asked to remain anonymous to protect her career. Only one person at her university has ever asked her why she is a Republican, she says. “For most of my colleagues, anyone who is a conservative must fall somewhere on the continuum between stupid and evil,” the biologist says.

“What you believe has come to be a stand-in for whether you are a good person.”

The situation has worsened since Trump took office in January, she adds. “What you believe has come to be a stand-in for whether you are a good person.”

Then there is John Tellis, a chemist at the biotechnology company Genentech in South San Francisco, California. When Tellis was studying for his PhD at the University of Pennsylvania, he tried not to reveal his Republican views. Now, ironically, the election of a Republican president has made it easier for him to talk about politics with his co-workers, he says, because they share his distaste for Trump.

Encouraging political diversity among scientists could improve research by helping people to see beyond their own views and prejudices, says Richard Freeman, a labour economist at Harvard who studies gender and racial diversity in science.

He notes that Republicans are not alone in staking out political positions contrary to mainstream science. Surveys show that Democrats tend to be more sceptical than Republicans about the safety of genetically modified organisms and nuclear power, even though many studies have concluded that the technologies are safe.

The parties’ ideological differences translate into different priorities for government science funding. When Republicans control the government, they tend to increase the military’s research and development budget — which includes programmes that support academic scientists in a broad range of disciplines. By contrast, Democrats tend to increase the budgets of the EPA, NASA and the Department of Commerce, which includes the National Oceanic and Atmospheric Administration.

Scientists could build bridges with conservative politicians by improving their relationship with the military, Freeman says, which is “100% pro-science”. Although many of its political boosters are sceptical of global warming, the military has spent billions of dollars on green-energy technology over the past decade. The Pentagon has also warned that climate change could cause water and food shortages and unrest in unstable regions of the world.

Others say that people who dismiss all Republicans as anti-science should look deeper into the party’s history. Republican president Richard Nixon created the EPA in 1970, Alley notes. And Republican congressman Newt Gingrich led an effort in the late 1990s to double the NIH budget. “There’s a long tradition of support,” he says, “even if it’s the other way right now.”