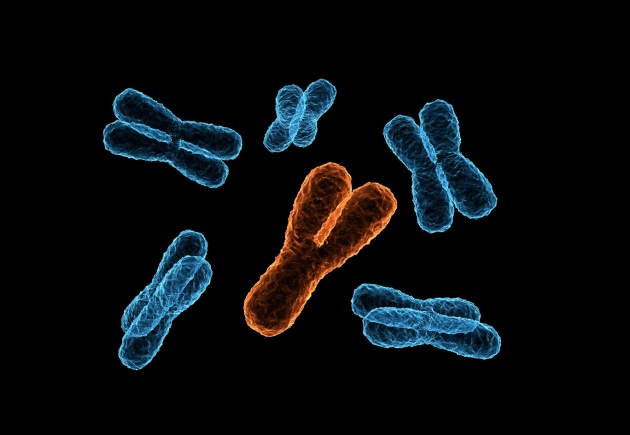 The Y chromosome is definitely the runt of our chromosome litter. Among our 23 pairs of these precious genetic bundles, pairs one through 22 are basically equal in size. But the Y — which holds genes that determine whether a mammal will be a male — is paired with the much larger X chromosome, and pales in size by comparison. Indeed the Y has only 19 of the approximately 600 genes it once shared with the X, 200 to 300 million years ago. But the decline and fall of the Y has stopped, according to new research published in this week's Nature1.

Geoff Marsh spoke to Henrik Kaessmann and Daniel Bellott about the results they and their respective teams published in Nature.

The Y has been stable for the past 25 million years, scientists say. And a major reason is that many of its remaining genes are crucial to the survival of all humans, going far beyond sex determination. There are genes that affect protein synthesis, how active a gene is, and others that splice RNA segments together. They are found in the heart, the blood, the lungs, and other tissues throughout the body. “These are powerful players in the central command room of cells,” says David Page, a biologist and director of the Whitehead Institute of Biomedical Research at the Massachusetts Institute of Technology. He is one of the authors of the new paper, and says it “puts this notion of the ‘rotting Y’ to rest." [A second, related paper2 and a News & Views article also appeared in the same issue of Nature.]

While other scientists agree that Page’s team is making the Y look rather robust, one of the proponents of the 'rotting Y' idea isn’t convinced. The past several million years may simply be a lull in a long-term trend of Y degradation, says Jennifer Graves, a geneticist at the Australian National University in Canberra. “At least two rodent groups have managed to dispense with it” altogether, she says.

The Y chromosome began losing respect in the late 1950s. Geneticist Curt Stern, at the time the president of the American Society of Human Genetics, gave an address noting that very few expressed genes actually resided on the Y. In 2002, Graves and another scientist noted in Nature that the Y had been diminishing in size from early mammal lineages through primates, and predicted the male chromosome would be extinct in 10 million years. That led to a lot of people wondering whether males would go with it.

Page and his colleagues, led by Daniel Winston Bellott, a research scientist in his lab, set out to test this idea by examining the evolutionary history of the Y. They compared complete sequences of the DNA on the chromosome in eight mammal species. They started with species that appear early in the fossil record, including opossums, bulls, rats and mice, and went on to species that appeared relatively recently, including rhesus macaque monkeys, chimpanzees and humans.

That stability, he argues, comes from a vital core of about 12 genes on the Y that have nothing to do with male sex determination, sperm or male sex organ development. Instead, these genes ensconced on the Y are expressed in other tissues, such heart cells and blood cells. They are responsible for vital cellular functions, such as protein synthesis or regulating the transcription of other genes. That means the Y is important to the whole organism’s survival, he says, and so survival of these genes would be favored by evolution.

Fun to be at the Y

Andrew Clark, a geneticist at Cornell University, agrees that once these core genes had “run a gauntlet” that stripped the Y of less-essential pieces of DNA, they enjoyed remarkable stability.

Graves, the Australian geneticist, is not so sanguine. “Y degradation is clearly not a linear process,” she points out. “The last stages of decay are likely to be subject to great fluctuations.” In her view, the stability may be temporary. She says that two species of spiny rats in Japan have lost the mammalian Y chromosome completely, shifting many genes to other chromosomes. Two mole vole species, she adds, have lost some Y genes completely, probably using other genes to pick up their functions. “Although rodents seem to be ahead of primates in experimenting with bizarre new sex chromosome systems, we should not be complacent,” she concludes.

Page responds that he sees stability of these core Y genes in so many species that further losses appear unlikely. “It could happen, but I just don’t see it,” he says.

The persistent Y and its store of widespread regulatory genes brings up another issue for biologists, Page says: the cells of men and women could be biochemically different. Men with their Y-related genes will have slightly different cells than women, who have two X chromosomes, and that goes above and beyond the differences related to sex determination. When biologists experiment with cell lines, they typically don’t note whether the cells originally came from a male or a female. “We’ve been operating with a unisex model for a long time,” Page says. And it may not be valid. An experiment on an XX cell line may not have the same result as the same experiment run on an XY cell line.

Why this matters, Page says, is because some diseases, such as autoimmune illnesses, appear to affect women to a greater degree, while other problems, such as autism-spectrum disorders, affect more men. But biologists trying to untangle these mysteries on a cellular level have been, by and large, blind to subtle biochemical differences — because they are not comparing male and female cell lines — that could affect their results. It is time, Page says, to take those blinders off.