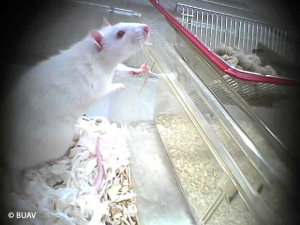 An image captured by an undercover animal-rights activist in an Imperial College London facility.

The treatment of laboratory animals at one of the United Kingdom’s most prestigious universities came under severe criticism today from an independent review set up in the wake of allegations of malpractice.

Imperial College London’s animal-research facilities are understaffed, under-resourced and operating without adequate systems for training, supervision, management and ethical review, according to the report released today.

“Across a whole number of areas there needs to be significant improvement,” says Steve Brown, director of the Medical Research Council Mammalian Genetics Unit in Harwell, UK, and the man appointed to chair the review.

The university has accepted all of the recommendations of the review, and said in a statement that “there is significant scope for improvement”.

Imperial appointed Brown after an undercover investigation by London-based campaign group BUAV (British Union for the Abolition of Vivisection), which in April alleged that many animals at the university’s facilities were subjected to severe suffering. The BUAV's exposé included graphic imagery and reported incidents such as a researcher leaving a clamp inside an animal after surgery and animals being left in distress in short-staffed laboratories over a weekend. The UK government's Home Office launched an official investigation into these specific allegations, but Brown’s group was appointed in parallel to look at animal care and welfare across the whole university.

Brown's review found that Imperial’s Hammersmith facility was well equipped and that there was a high quality of animal husbandry, but there was still “considerable room for improvement” in working practices, operational standards and mechanisms for reporting concerns about animal welfare. The report also found that there were not enough staff at this facility, and there was too much reliance on temporary staff.

Overall, the investigators highlighted the “ad hoc” nature of competency assessment, supervision and training, and found little provision for sharing information and best practice between staff members. In addition, the work culture was found to be flawed, with a focus on procedure to the detriment of improvements in the ‘three Rs’: approaches for replacing, reducing and refining the use of animals in experiments. “The committee found that there was a level of complacency at the College with little opportunity for challenge or bringing in new ideas and that there was scope for improvement in the culture, management and overall leadership,” says the report.

Finally, the university's crucial Animal Welfare and Ethical Review Body — which is responsible for reviewing animal use — was found to be “not fit for purpose” and in need of “wholesale reform”, says the report.

In its response, Imperial says it will invest in staffing and bring in a plan by February 2014 to respond to the committee’s report, and that it has already enhanced training for researchers who work on animals.

“The College will now move quickly to implement the recommendations,” said a statement from the university. “The committee commended the high standards of husbandry and animal care at Imperial. However, the College accepts that there is significant scope for improvement in aspects of the operation, management and oversight in order to become a world leader in animal research.”

Sarah Kite, director of special projects at the BUAV, says that the conclusions reached by the report are “damning”, and highlight that there are not enough Home Office inspectors to monitor the United Kingdom’s animal researchers.

“It shouldn’t have been down to the BUAV to uncover these failings,” says Kite. “If this is happening in one of the UK’s leading universities, it raises the question of what could be going on in other facilities around the country.”

Paul Flecknell, director of the research-animal facilities at Newcastle University, UK, and a member of the committee behind the report, stressed that the investigation was specific to Imperial, but he says that “every institution will pick up something we’ve said and think, ‘we should take more note of that’”.

The Home Office investigation of the specific incidents uncovered by the BUAV was due to be produced by the end of the year, but a spokeswoman told Nature last week that there was currently no clear date for when it will be available.