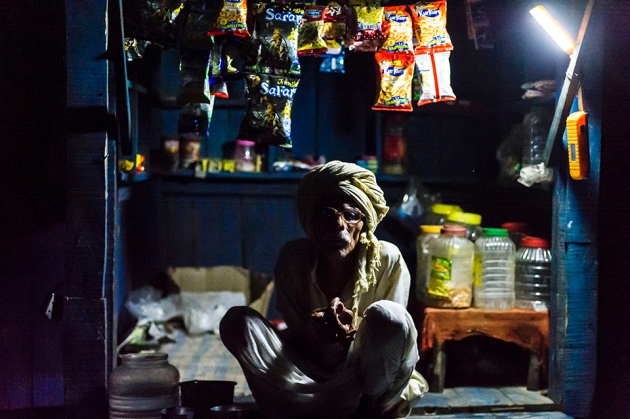 Without electricity in Chowkipur, India, shopkeepers rely on battery-powered LEDs.

Public spending on research into renewable energy is too low to meet even the modest targets set at the Paris climate talks last December, let alone decarbonize the world economy. It stands at about US$6.5 billion a year, or less than 2% of total public research and development (R&D) spending, according to data from the International Energy Agency.

There are encouraging signs that the political will and private-sector interest is coming into place to accelerate the transition to a decarbonized economy. Two recently formed initiatives aim to increase public funding for renewables R&D: Mission Innovation and the Global Apollo Programme. In addition, the Breakthrough Energy Coalition is a group of private-sector investors (led by Bill Gates) who have pledged to invest in innovative ideas resulting from publicly funded research.

To ensure the strategic and most effective use of these funds, stakeholders must work together across countries, sectors and disciplines. We propose that this is done through a 'grand challenges' strategy for renewable energy. We argue that agreeing on a global set of priorities would be an efficient and effective way for countries and funders to make decisions about which technologies to back.

As we approach the first anniversary of the Paris climate agreement, we urge governments, researchers, the private sector and philanthropists to act quickly to forge this important initiative.

Grand challenges are proven to accelerate scientifically risky research in areas that would otherwise be left behind, such as global health.

In 2005, the Bill & Melinda Gates Foundation in Seattle, Washington — with the Wellcome Trust in London, the Canadian Institutes of Health Research and the Foundation for the US National Institutes of Health — targeted issues surrounding neglected diseases, which affect most of the world's population (H. Varmus et al. Science 302, 398–399; 2003). Fourteen priority topics included developing a genetic strategy to incapacitate insects that transmit agents of disease, such as the mosquito vectors of yellow fever, dengue and Zika virus (D. A. Joubert et al. PLoS Pathog. 12, e1005434; 2016).

“Scalability, affordability, uptake and dissemination need to be addressed.”

Renewable energy calls for a broadly similar approach. It is a difficult, urgent global problem that has been neglected in terms of public research and investment. It requires big thinking, multidisciplinary approaches and supportive policies to compete with existing systems. And it is tightly coupled to other global challenges, such as food and water security, poverty and health.

We propose the following steps. A consortium of funding partners, including some or all of the Mission Innovation countries, Breakthrough Energy Coalition investors, philanthropic foundations and other private-sector actors, should appoint an international science board of distinguished researchers, policymakers, captains of industry and engaged citizens from developed and developing countries.

The board's task would be to distil a set of grand challenges for renewable energy, and make them as detailed as those for global health. Areas to be addressed include energy harvesting and storage, smart grids and transmission, policy levers and economic models.

Take energy storage, for example. One challenge might be to produce large- and small-scale storage systems that are safe, scalable and inexpensive. This would catalyse a range of research, from batteries based on simple 'flow' systems — which host a series of reactions in one device and use Earth-abundant materials for electrolytes and membranes — to new science and engineering for storing energy as liquid fuels. Any storage system must be safe and sustainable, competitive and compatible with energy generation and distribution systems.

Scalability, affordability, uptake and dissemination need to be addressed, and links improved between science and policy. In the developed world, public policies — including feed-in tariffs — might be required to encourage the development of disruptive innovations that hold promise to displace existing technologies. In the developing world, new technologies must respond to basic local needs such as food and water security. Near-term strategies for improving energy efficiency and reducing carbon release must be delivered with long-term ones to decarbonize the global economy.

Such a shared purpose would align the efforts of governments, agencies, foundations, investors, the research and policy communities, citizens and industry. It would accommodate the many disciplines needed across the natural and social sciences, and galvanize the best investigators — regardless of country — to work together to help solve one of the world's most pressing problems.