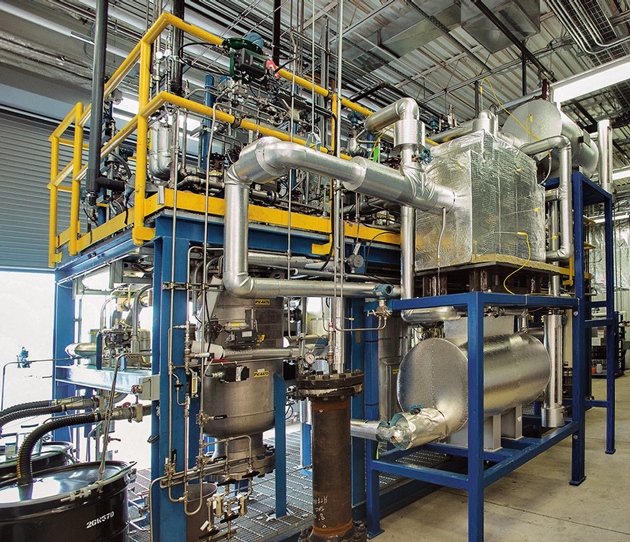 After biomass is heated to 900 °C, it gives off hydrogen and carbon monoxide. These gases get turned into liquid fuels by Fischer–Tropsch reactors, such as this one built by Velocys in Plain City, Ohio.

By the end of 2015, all British Airways flights out of London City Airport will be fuelled by rubbish — the paper, food scraps, garden clippings and other organic detritus discarded by the city's residents.

But before it goes into planes, the rubbish will be processed at GreenSky London: a biofuels plant under construction on the eastern side of the city. Each year, the facility will take in some 500,000 tonnes of the city's waste and will transform the organic component into 60,000 tonnes of jet fuel, a similar quantity of diesel fuel combined with petrol-like naphtha, and 40 megawatts of power.

This level of output would hardly be noticed at conventional petroleum refineries, which typically generate a similar volume of product within a week. But “gathering enough biomass to run a petroleum-scale refinery is almost unthinkable”, says Nathanael Greene, director of renewable-energy policy at the Natural Resources Defense Council in New York City. GreenSky London is typical of a trend for second-generation biofuel reactors that are not only omnivorous — they can be fed with corn stalks, wood chips and other forms of agricultural waste, as well as urban rubbish — but also small. The hope is that they will slash transportation costs by bringing the reactors to the biomass instead of vice versa.

Proponents argue that novel catalytic techniques and compact designs will make second-generation biofuel plants not just environmentally friendly, but also profitable enough to compete with petroleum-based fuels without subsidies. Questions remain about how realistic this hope is. But at least some customers are giving the plants a try; commercial units have begun to spring up from Finland to Mississippi to Alaska.

If these second-generation plants do succeed, says Greene, they will offer at least one crucial advantage over their predecessors: a low-carbon way to create fuel that suits existing vehicles.

But there are serious drawbacks to making fuel from food in a world with a growing population and limited arable land. So, for more than a decade, the biofuels industry has been working on economical ways to use cornstalks, wood chips and other by-products that currently go to waste. This has posed a challenge for the fermentation approach, because these materials contain tough, long-chain molecules such as cellulose and lignin that yeast cannot easily digest. Over the past five or ten years, advances involving pretreatment with acids and enzymes have partially overcome that barrier, and commercial plants designed to produce cellulosic ethanol are now under construction in Iowa and Kansas (see Nature 507, 152–153; 2014).

But even these facilities will not be able to overcome the biggest restriction on the fermentation approach: the 'blend wall'. This is the maximum amount of ethanol that can be mixed into petrol without causing corrosion in fuel lines and car engines. For current models, the blend wall is about 10–15% — and first-generation fermentation plants already produce more than enough ethanol to meet this demand. Indeed, several US ethanol refineries built in the past decade already stand idle, victims of drought-induced price hikes and market saturation.

That reality, paired with nine years of historically high oil prices — the price per barrel currently stands at around US$100 — has spurred vigorous research into thermochemical reactors, which convert biomass directly into fuels other than ethanol using heat and catalysts.

The most common thermochemical approach is gasification, in which carbon-rich material such as coal, wood chips or municipal waste is heated to produce synthesis gas or 'syngas' — a mixture of mainly hydrogen and carbon monoxide, with traces of carbon dioxide and other gases (see 'Fuel flow'). At the GreenSky London facility, one or more proprietary gasifier units built by Solena Fuels, a renewable energy firm in Washington DC, will accomplish this step by vaporizing the waste with jets of ionized plasma that heat the material to some 3,500 °C. Such torches are more energy intensive than other methods of gasification, in which the biomass is heated from below on beds of sand or other material. GreenSky London elected to use them because the contents of municipal waste can vary markedly, and by adjusting the temperature of the torches, the composition of the syngas can be kept consistent.

Consistency is important for optimizing the second step of the process, in which the syngas is sent into a chemical reactor — made, in the case of GreenSky, by Velocys of Plain City, Ohio. There, it undergoes the Fischer–Tropsch reaction, which fuses hydrogen and carbon monoxide into long-chain hydrocarbons. Velocys has made its system unusually compact by reducing the size of the cobalt-containing catalyst particles to the nanometre scale and arranging them along a series of microchannels, which direct the flow of the syngas and produce reaction surfaces with an effective area of a much larger device.

The Fischer–Tropsch units have also been made as modular as possible, so that chunks can be assembled at a factory and then be plugged together on site. “You need to achieve economy not through size, but in the way you build them,” says Neville Hargreaves, business-development manager at Velocys.

Another compact system is the BioMax gasifier developed by the Community Power Corporation in Englewood, Colorado. The company says that this device is modular and small enough that four can fit into a standard shipping container, and can run on almost any kind of shredded biomass, from food scraps to cardboard to wood chips. The resulting syngas can then be used in place of natural gas for heating, cooling or electricity generation. A typical unit generates about 150 kilowatts, enough to power between 25 and 50 homes, run three supermarkets or keep vital hospital equipment working. And in the near future, BioMax units should be able to plug in a Fischer–Tropsch reactor and produce biodiesel as well.

In 2011, Community Power was bought by the Afognak Native Corporation, which is owned by the indigenous people of Alaska's Afognak Island. They hope to sell the units throughout Alaska and northern Canada, where electricity and transportation fuel are expensive.

Among the strongest selling points of the two-step gasification approach to biofuels is the fact that almost all the syngas gets turned into hydrocarbons with no double bonds or ring structures, producing fuels that burn cleanly and completely. But that advantage has not kept researchers from exploring a single-step alternative. In the pyrolysis approach, the biomass is heated in the absence of oxygen to some 500 °C and converted into organic liquids directly. These liquids can then be refined into fuels using standard technology. Pyrolysis is relatively immature compared with gasification, says Mark Nimlos, a principal scientist at the National Renewable Energy Laboratory in Boulder, Colorado. But that can be seen as a virtue, he adds. “There is lots of potential to improve.”

Several companies are already testing the commercial viability of the technology. For example, UOP of Des Plaines, Illinois — a subsidiary of the New Jersey-based conglomerate Honeywell International — is partnering with Ensyn Technologies of Ottawa to market Ensyn's Rapid Thermal Processing (RTP) units. The companies foresee these units being installed next to lumber mills, where each one would be capable of turning waste wood into some 76 million litres of pyrolysis oil a year. That would be enough to warm 31,000 homes if it were burned directly as heating oil; alternatively, if refined into petrol, it could fuel about 35,000 typical US automobiles.

Green Fuel Nordic, a biorefining company based in Kuopio, Finland, is planning to install at least one RTP unit in the Finnish town of Iisalmi, where it will process waste from the country's extensive forestry industry. The company is also working with the European Commission to develop a set of quality standards for pyrolysis fuels. One component of concern is tar: a gummy residue of long-chain molecules that are hard to refine. Another is oxygen, which is abundant in biomass and reacts with pyrolysis oil to form organic acids that can seriously corrode refinery equipment. Finding better ways to deal with both of these contaminants is a major goal of pyrolysis-oil research. At present, the easiest way to remove the oxygen is to add molecular hydrogen derived from natural gas, but that would both undermine the climate-friendly appeal of pyrolysis oil and drive up the cost.

Indeed, the financial viability of any of the second-generation biofuel technologies is still an open question. Witness the saga of one of the world's most advanced pyrolysis biorefineries: a $225-million facility in Columbus, Mississippi. Owned by KiOR, a renewables company based in Pasadena, Texas, the facility demonstrated its technical viability by producing some 3.5 million litres of petrol and diesel fuel from wood waste in 2013 — about as much as a conventional petroleum refinery produces in a day. But KiOR, which shut down the Columbus refinery for upgrades in January, will run out of operating funds by the end of August — and it has enough money to last that long only because it secured a $25-million loan earlier this month from billionaire venture-capitalist Vinod Khosla, whose company, Khosla Ventures, originally funded the project.

For GreenSky London, economic viability also remains an open question. But its partners — Velocys, Solena and British Airways — are hopeful. They have not disclosed the cost of the facility, but none of them see cost as the central issue. British Airways expects the operation to help it meet the carbon-emissions targets mandated by the European Union while ensuring a steady supply of jet fuel that is not subject to the price fluctuations that plague the oil market. And both Solena and Velocys hope that GreenSky London will be the first of many such facilities serving airports around the world.

Every field, forest and landfill site is a potential fuel source for these facilities, says Hargreaves. And the need for liquid fuels will never completely go away. “Fifty years in the future, we might get land transportation entirely electrified,” he says. But aircraft require a level of energy density that batteries simply cannot provide. Liquid fuel, he says, “is very difficult to substitute.”