While most of the world’s glaciers are shedding ice at a brisk clip, many in one mountain range along the rim of the Tibetan plateau have been posting measurable gains in recent years, a new study confirms1. The finding comes just as researchers get set to launch a long-term international effort to study in detail 25 Tibetan glaciers (see 'Glaciologists to target third pole') — a small sample of the 46,000 ice masses that supply water to some 1.4 billion people in central and southern Asia.

On the basis of field studies of glaciers in the Karakoram mountain range, which straddles China’s border with India and Pakistan, researchers suggested in 2005 that the ice masses there might actually be growing2. Subsequent analyses of satellite images hinted that many glaciers in the region were spreading to cover more area, but it was not clear whether the ice masses were simultaneously becoming thinner and therefore losing ice overall. The new study, published today in Nature Geoscience, looks at trends in both ice coverage and thickness and finds that in the central Karakoram the glaciers are indeed becoming heftier, if only slightly. 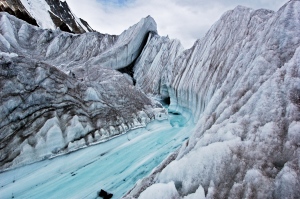 Some glaciers in the Karakoram mountain range are growing, despite a warming global climate.

The researchers, led by glaciologist Julie Gardelle of the University of Grenoble in France, estimated changes in the thicknesses of glaciers across a 5,615-square-kilometre area by comparing data gathered during two space-based surveys — one by instruments aboard the Space Shuttle Endeavour in February 2000 and the other by France’s SPOT5 satellite in December 2008. After accounting for differences in orbital paths of the two craft and the different times of year at which data were gathered, among other factors, the team estimated that in each year from late 1999 to late 2008 the region’s glaciers, on average, gained a thickness of ice that if melted would yield about 11 centimetres of water.

The team has addressed all known problems to ensure that the two data sets are comparable, says Graham Cogley, a glaciologist at Trent University in Peterborough, Ontario, who wrote an accompanying News and Views on the paper. “This is a solid, high-grade measurement,” he notes.

“There’s no question that Karakoram glaciers are holding their own, but exactly why that is, we don’t know,” says Kenneth Hewitt, a geographer at Wilfred Laurier University in Waterloo, Ontario. The new study pins down recent trends in ice thickness in the region but doesn’t reveal why they are changing, he adds.

Some scientists have suggested that thick layers of rocky debris smothering some parts of the Karokoram’s glaciers — the results of frequent avalanches — are insulating the glaciers, protecting them from the same warmth that afflicts glaciers elsewhere3. But the new data reveal that ice loss for these glaciers at lower elevations is the same in debris-covered areas as it is where the ice and snow are clean, says Gardelle.

Several studies hint that the climate in the Karakoram may be cooling, contrary to the trend in most of the world. Between 1961 and 2000, weather stations in the region recorded an increase in winter precipitation and a decrease in average temperatures during the summer. And during the same 40-year period, average flow volume for one of the region’s rivers, which is fed by glacial meltwater, was 20% below normal.

But on the whole, Gardelle says, “we have no idea what’s behind the odd behaviour of these glaciers, or when it started”. Moreover, she notes, researchers have no clues about whether the Karakoram glaciers will continue to accumulate ice in coming decades.

The accumulation of glacial ice in the Karakoram and melting elsewhere along the fringe of the Tibetan plateau is not related to a mistaken, yet widely quoted, estimate by one working group of the Intergovernmental Panel on Climate Change that Himalayan glaciers would melt into oblivion by 2035 (ref. 4). That estimate, Cogley notes, was based on an inadvertent transposition of the numerals in 2350, cited in one study as the year in which the area covered by the world’s glaciers will shrink by 80%.