The robot in WALL-E may have befriended a cockroach, but humans are more likely to react with revulsion than joy at the sight of one. Would you feel differently, however, if you were trapped in a collapsed building or mine, and rescuers had sent a cockroach in to find you? A team of researchers says it can harness the cockroach's uncanny survivability in ways that might someday benefit humanity.

The trick is to fire wireless signals at a roach's antennae and other sensory organs to guide it to a desired destination, says Alper Bozkurt, an assistant professor in North Carolina State University's Department of Electrical and Computer Engineering. 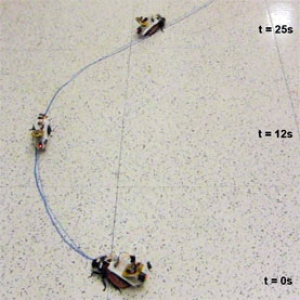 The Madagascar hissing cockroaches wore electrical devices that look like backpacks. The researchers wirelessly sent electrical impulses to the backpack's receiver, which stimulated either the left or right movement.

Bozkurt, working with doctoral candidate Tahmid Latif, communicated with Madagascar hissing cockroaches by saddling them with electrical devices that look like backpacks. Each insect backpack included a thin, rigid, printed circuit board with a microcontroller, a wireless signal receiver, miniature plugs for connecting stimulation electrodes and a lithium-ion polymer battery.

"What we do is similar to riding a horse," Bozkurt says. "[The] cockroach walks naturally, and we simulate barriers by sending pulses to its antenna. They use their antenna as touch sensors, so stimulation on one side directs these insects towards the opposite direction." Bozkurt and Latif presented their research last month at the 34th Annual International Conference of the IEEE Engineering in Medicine & Biology Society in San Diego, Calif.

Bozkurt and Latif attached the backpacks to the roaches using magnets that they glued to the insects' backs. They used tiny stainless steel electrodes to connect the backpack's circuit board to the roach's antennae and fixed them in place with medical-grade epoxy, according to Bozkurt. The researchers then wirelessly sent electrical impulses to the backpack's receiver, which stimulated either the left or right antenna.

The greater the electrical charge, the more sharply the roaches changed direction. The researchers say they programmed the microcontroller with an algorithm to monitor the amount of voltage induced into the roach's neural tissue in order to keep from damaging that tissue and making it unresponsive to stimulation pulses.

The researchers see remote-control cockroaches as an alternative to small-scale robots. Designing robots at that scale is very challenging and cockroaches are experts at navigating hostile environments, according to Bozkurt. "They come with biological autonomy to help them survive and this, if carefully controlled, helps them to respond to uncertain and dynamic conditions of certain scenarios such as searching for survivors after an earthquake," he says. Bozkurt and Latif's next step is to miniaturize the backpack even further and gain more precise control of movement.