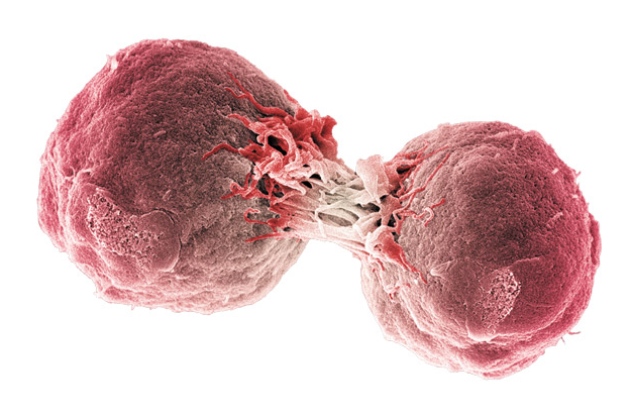 Lymphoma has been subdivided into dozens of classes of cancer on the basis of the immune cell affected.

Like a cancer cell, the definition of lymphoma has been dividing. Nearly 700,000 people in the United States have the disease, but over the past few decades, lymphoma has been sliced into several dozen subgroups on the basis of the type of immune cell that becomes cancerous. Drug companies have targeted these subtypes and have asked that they be counted as ‘orphan diseases’ — in the United States, this refers to diseases that have no cure and that affect fewer than 200,000 people, according to the definition given by the US Food and Drug Administration (FDA).

In 2013, the FDA granted orphan-drug designations to specific lymphoma treatments at least 21 times. And overall the programme — run by the Office of Orphan Products Development (OOPD) — designated a record 260 drug applications as orphans last year, a 38% jump from 2012.

But as the trend towards precision medicine continues, some worry that the programme risks becoming a victim of its own prodigious success. The benefits given to developers through the scheme — such as market exclusivity — are helping to send the prices of orphan drugs sky high. And because drug applications for common diseases are stagnating, one of the FDA’s main revenue sources is under threat.

“Orphans are taking over the agency,” says Timothy Coté, a former OOPD director who now runs his own business, Coté Orphan Consulting, in Silver Spring, Maryland. In all, more than one-third of new drugs approved by the FDA last year were orphans.

The 1983 Orphan Drug Act was intended to give drug companies generous incentives to develop products that might not otherwise seem to be worthwhile investments. Companies typically apply for an orphan-drug designation early in the drug-development process. If an orphan drug is ultimately approved for the market, the FDA waives the US$2.17-million ‘user fee’ that companies must pay to the FDA for new drugs. The companies also get tax credits for incurred clinical-trial costs, along with seven years of market exclusivity, during which time approvals for similar drugs are blocked. 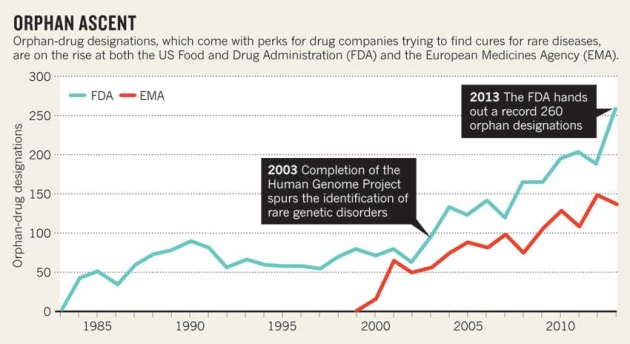 Europe has a similar scheme: in 1999, the European Medicines Agency created an orphan designation for diseases that affect fewer than 5 in 10,000 people in Europe. The programme, which among other perks grants 10 years of market exclusivity, has also seen a steady rise in orphan designations over the past few years (see ‘Orphan ascent’).

Companies are flocking to orphan drugs partly because of the difficulty in finding significantly better treatments for common diseases that already are well supplied with medicines. Dozens of treatments already exist for diabetes, for example, and many of them are quite effective. “The age of the blockbuster appears to be over,” says Coté.

But drug developers are also finding that the market for some orphan drugs is bigger than one might think. New York City-based Pfizer, for example, is developing orphan treatments for sickle-cell disease. Although the disease is rare in the United States — where it affects fewer than 100,000 people — sickle-cell anaemia is common in Africa, and the company factors that into its calculations, says Alvin Shih, chief operating officer of Pfizer’s rare-disease research unit in Cambridge, Massachusetts. He says that the company established the unit in 2010 after deciding that rare diseases would be a good investment.

Even when diseases are extremely rare, orphan drugs can still be profitable. In 2012, for instance, the FDA approved a drug called Kalydeco (ivacaftor; Vertex Pharmaceuticals, South Boston, Massachusetts), which targets one particular genetic mutation that causes cystic fibrosis, a disease that affects about 30,000 people in the United States. The drug works for only about 4% of patients with cystic fibrosis, and they pay as much as $373,000 per year for it.

Some critics have expressed concerns that companies might artificially ‘salami-slice’ diseases. To protect against that, the FDA issued a rule in June 2013 that clarified its position: applicants must provide scientifically plausible evidence for the uniqueness of a disease. But scientific advances provide ample opportunities to offer such justification. Geneticists have connected tiny mutations to rare syndromes; virologists have tracked the evolution of receptors on the surfaces of flu viruses; and biochemists have discovered the misfolded proteins that appear in diseases such as Alzheimer’s.

The FDA’s definition of an orphan drug reaches beyond medicines that treat very specific diseases. Drugs that effectively treat a small subgroup of patients with a common disorder — such as people for whom previous treatments for depression have failed — can also be designated as orphans, says Gayatri Rao, who heads the OOPD. Even an infection by bacteria with a certain type of antibiotic resistance could potentially get the designation.

“Orphans are taking over the agency. The age of the blockbuster appears to be over.”

These and different subtypes of a cancer are a far cry from the types of extremely rare genetic disease that were the original motivation in establishing the orphan programmes — such as progeria, which causes premature ageing and affects fewer than 250 people in the world. “At the time, people didn’t foresee oncology going in the direction it has,” says Steven Bates, chief executive of the BioIndustry Association, an organization of UK pharmaceutical companies based in London.

Coté says that it is entirely conceivable that orphans might one day account for most of the FDA’s drug approvals — and that could ultimately sap the agency of a major income stream. He notes that the $2.17-million user fee that the FDA depends on to help fund its operations has already risen dramatically, up from $573,500 just a decade ago, and he suspects that is partly because of the increasing number of orphan drugs that do not warrant any fee.

And the exorbitant cost of some orphan drugs is becoming a concern for insurers and national health-care systems in the European Union, says Bates. The UK National Institute for Health and Care Excellence, for instance, is considering ways to handle these expensive drugs, such as price ceilings or having companies justify their prices.

Eventually, says Rao, regulatory agencies might need to rethink their strategies. But for now, the FDA is glad that the orphan programme is so popular. “These are sort of long-term considerations, and we’re not there yet,” she says. “In the near future, the more orphan drugs we see, the better.”