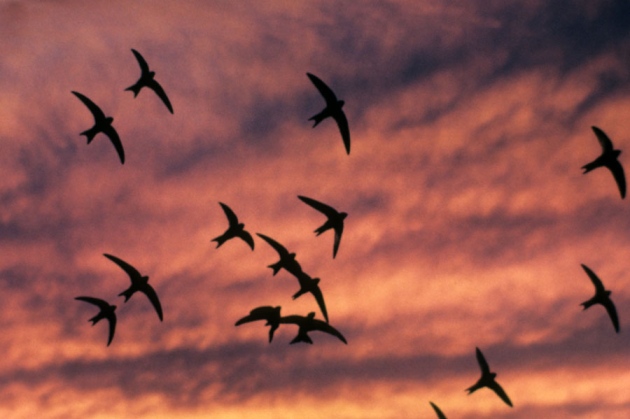 Common swifts (Apus apus) flit through the sky at sunset over France.

Some common swifts spend ten months in flight without taking a break, setting a flight record that would be the envy of Amelia Earhart and Charles Lindbergh. Researchers report these long hauls, which occurred during migrations between Scandinavia and central Africa, on 27 October in Current Biology1.

Ornithologists and birdwatchers have speculated about the long-distance prowess of common swifts (Apus apus) since the 1960s. People had seen the birds fill the sky in Liberia, for example, but couldn't find any nearby roost sites where the birds might land.

Scientists attached tags that combined tiny data loggers and accelerometers to the 40-gram birds to record their route and flight activity during their annual journey. The team tracked 13 individual birds, some for multiple seasons, starting and ending at their breeding grounds in Sweden.

The researchers found that some of the birds made a few brief night landings in winter but remained airborne for 99% of the time. Three birds didn't touch down once in the entire ten months.

“These long-term flights confirm what everybody suspected for quite some time now,” says Felix Liechti of the Swiss Ornithological Institute in Sempach.

Built to go the distance

Other birds can remain aloft for long periods. Alpine swifts (Tachymarptis melba) fly nonstop for half the year during their migrations2. And the much larger frigate birds (Fregata minor) off the coast of Ecuador can go for two months without landing while they forage for food in the ocean. They can even sleep on the wing3. But common swifts are in a class of their own.

“Common swifts have evolved to be very efficient flyers, with streamlined body shapes and long and narrow wings, generating lift force at low cost,” says Anders Hedenström, a study co-author and a biologist at Lund University in Sweden. The birds even eat while airborne, snatching flying termites, ballooning spiders and other aerial insects for in-flight meals.

Hedenström says that common swifts have adapted to a low-energy lifestyle, but his team does not yet know whether the birds sleep while aloft. “Most animals suffer dramatically from far less sleep loss,” says Niels Rattenborg, a neurobiologist at Max Planck Institute for Ornithology in Seewiesen, Germany. “But these birds seem to have found a trick through evolution that allows them to get by on far less sleep.”

If it weren't for an evolution in tracking devices, the secrets of these tiny birds would still be a mystery. “As the technology continues to decrease in size, it’s allowing us to measure smaller species and revealing more of these astounding migratory feats,” says Bill Deluca, an ecologist at University of Massachusetts, Amherst.