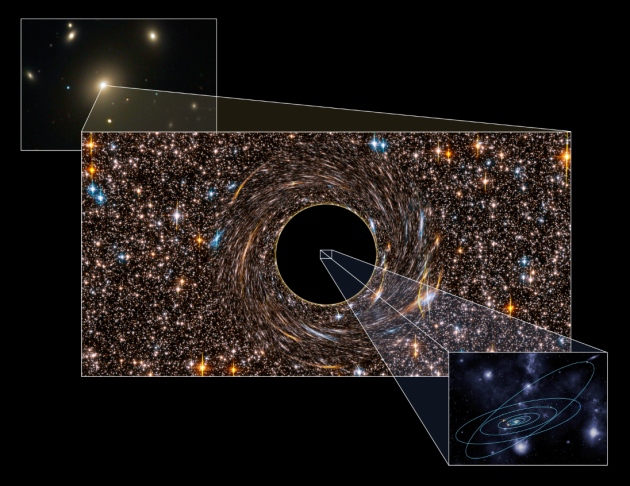 The black hole discovered in the galaxy NGC 3842 dwarfs our Solar System (inset).

Astronomers have discovered the two most massive black holes known in the Universe. Tipping the scale with masses on the order of 10 billion times that of the Sun, these gravitational monsters could represent a missing link: the first known remnants of the brightest quasars that lit the cosmos only a billion or so years after the Big Bang.

The findings, published this week in Nature, also suggest that there is a difference in the way the largest supermassive black holes reached their formidable size relative to their somewhat smaller cousins.

Supermassive black holes formed early in the history of the Universe, by gorging on gas and stars in the cores of developing galaxies. They are thought to reside in most if not all of the massive galaxies astronomers can observe today, but they cannot be seen directly, as light cannot escape the gravitational field of a black hole.

Chung-Pei Ma, a cosmologist at the University of California, Berkeley, and her colleagues went hunting for the monsters by measuring the velocities of stars moving closely around the centres of large galaxies. Because the velocities of the stars are related to the mass of the body they orbit, the technique offers an indirect way to ‘weigh’ the supermassive black hole lurking in the cores of other galaxies. The team restricted their observation to galaxies that are both large and embedded in galaxy clusters. In theory, supermassive black holes there could grow to enormous size by consuming gas and stars provided by other galaxies in the cluster.

“One may view these galaxy clusters as archeological sites, where ancient history left its fingerprints for us to discover,” notes cosmologist Avi Loeb of Harvard University in Cambridge, Massachusetts, who was not part of the study.

Using instruments on the Keck II and Gemini North telescopes atop Hawaii’s Mauna Kea, the astronomers found that a cluster galaxy called NGC 3842 houses a black hole with a mass equivalent to 9.7 billion Suns. Another galaxy, NGC 4889, which lies at the centre of another cluster, has a black hole with an estimated mass of about 20 billion Suns, although it could be as large as 37 billion. (The previous record holder, a black hole at the centre of the nearby galaxy M87, has a mass of 6.7 billion Suns, some members of Ma’s team reported at arXiv.org on 11 January and in the Astrophysical Journal on 10 March.

Both NGC 3842 and NGC 4889 are a little more than 300 million light-years (92 million parsecs) distant — relatively close by cosmic standards. Nonetheless, homing in on the motion of stars near the centre of each galaxy required high-resolution observations that were not possible even a few years ago, says Ma.

Study co-author Karl Gebhardt of the University of Texas at Austin notes that the masses of the newly discovered, extremely heavy black holes do not follow a well-known relationship between the mass of the central bulge of stars in a galaxy and the mass of its central black hole. That relationship appears to hold only for black holes up to about 6 billion Suns, he says. The newly discovered black holes are bigger than that relationship would suggest, which may indicate that these behemoths evolved differently, perhaps gaining heft when their home galaxies merged with others. That in turn could provide new clues about how galaxies and black holes form, he says.

Observers had previously inferred the existence of such massive black holes in distant galaxies, seen as they appeared about 1.2 billion to 3.3 billion years after the Big Bang. Those galaxies contained brilliant quasars — intensely bright sources of light that are the result of superheated matter falling into giant black holes. The quasars died out long ago, but the giant black holes remain, having lost only a negligible amount of mass as they evolved over billions of years to become part of the present-day Universe.

“Therefore, if we infer the existence of quasar black holes of ten billion solar masses at early cosmic times, we’d better find their counterparts in the present-day Universe,” says Loeb.

With the new match between extremely massive black holes in early and present-day galaxies, “we can better understand how quasars affected the evolution of their host galaxies and how the hosts nurtured the growth of quasar black holes,” Loeb notes. That’s particularly important because quasars can be seen so far back in time that they can trace the beginnings of galaxy formation, Gebhardt says. Theorists can now be more confident about using black-hole masses in the early Universe to model how galaxies came to be, he adds.