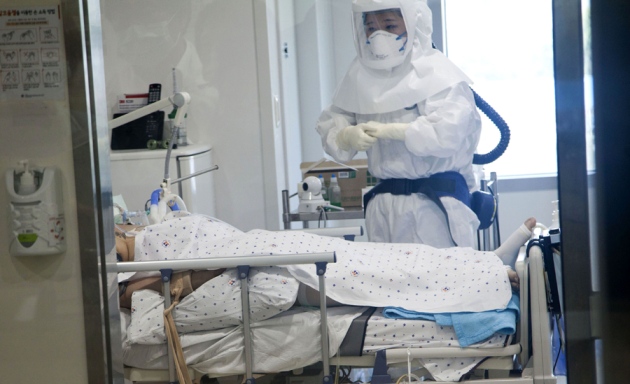 A South Korean healthcare worker tends a MERS patient inside an isolation ward at the Samsung Medical Center in Seoul.

The outbreak of Middle East respiratory syndrome (MERS) in South Korea — in which 154 people are known to have been infected so far, 19 of whom have died — is slowing down, experts say. But it might be several weeks before the outbreak can be declared officially over.

Cases of MERS peaked on 1 June during a spate of cases at the Samsung Medical Center in Seoul, which had followed an initial wave centred in St Mary’s Hospital in Pyeongtaek. Researchers have been watching to see whether the Seoul hospital’s cases might in turn trigger a large third wave of infections. Now that 14 days — the maximum incubation period for the MERS coronavirus — have passed since 1 June, it seems that this is not happening. 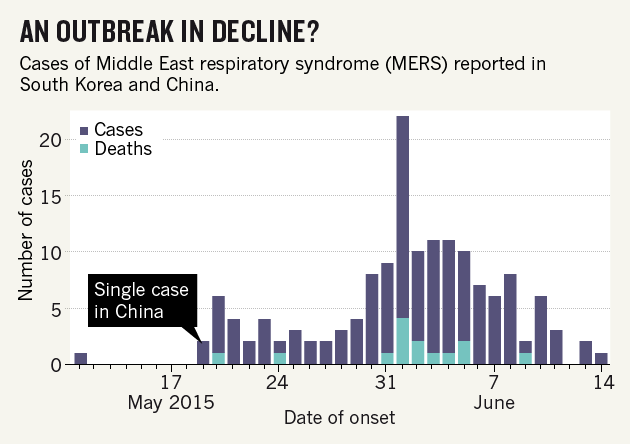 The latest epidemic curve, a plot of how many people fall ill over time, is “reassuring”, says Sung-Han Kim, an infectious-disease researcher at the Asan Medical Center in Seoul (see 'An outbreak in decline?'). It also shows that public-health control measures, such as tracing and isolating people who had been in contact with those infected, are working, he adds. “As of today, there is no evidence of a third wave, but it still needs a few more days of data to be sure,” he says.

Seven of the ten hospitals in South Korea that initially had MERS cases have now gone 14 days with no new cases, meaning that the disease there has run its course. But in a setback, cautions Kim, the three others have since had potential new exposures to the virus. He is particularly concerned about the possible “reseeding” of the Samsung Medical Center — which has accounted for 75 cases — where several new cases occurred in early June, including an ambulance worker who worked for more than a week before being diagnosed, during which time the worker came into contact with many hospital patients. Any people who were infected would probably only begin to show symptoms over the next few days. “This week will be an important point to predict whether this MERS outbreak will end shortly or not,” notes Kim.

Many people infected with MERS are known to have passed through other hospitals before they were diagnosed, says Keun Hwa Lee, a microbiologist at Jeju National University. Three hospitals alone were added to the list of facilities with confirmed cases since the weekend, pointing to the continuing threat of new outbreaks at other hospitals, Lee says. Meanwhile, the official count of facilities that have not had any cases, but which have to be monitored for possible further spread, has now risen to 72 — and many of these hospitals’ latest potential exposures to MERS were in the first 12 days of June.

Control measures to prevent new outbreaks have been massively scaled up, however. As of this week, 161 hospitals, designated ‘national safe hospitals’, will begin treating anyone showing respiratory symptoms in special isolated zones, which are cut off from outpatient or emergency departments. South Korea's health ministry has also said that no patients with pneumonia will be admitted to intensive-care units without first being tested for MERS.

Another uncertainty is whether further infections will develop in people who had been in contact with MERS-infected patients. By 16 June, 5,586 contacts of MERS cases had been traced and isolated for 14 days, with 3,505 people already given the all-clear.

A week-long joint investigation of the outbreak by the World Health Organization (WHO) and the Korean health ministry concluded on 13 June that its epidemiological pattern was similar to that of past MERS hospital-associated outbreaks in the Middle East. The investigation found that overcrowding in emergency departments and wards, and ‘doctor-shopping’ — the tendency of Koreans to seek second opinions at different medical facilities — probably contributed to MERS’s spread. The country's close-knit culture, in which family and friends tend to spend long periods with hospitalized patients, might also have been a factor.

Some critics have said that South Korea’s response to the outbreak was sluggish. But Kim says that this is unfair. Officials were partly “unlucky”, he says, that the first South Korean infected with MERS — a man who had visited the Middle East and fell ill on 11 May — visited four different health-care facilities and infected many other people before he was diagnosed and isolated on 20 May.

Other countries have taken just as long as South Korea to diagnose MERS cases exported from the Middle East, but fortunately had few further problems. A person who had recently travelled to the United Arab Emirates was hospitalized in France on 23 April 2013, for example, but MERS was not suspected until 1 May, and confirmed only on 7 May. Luckily, he infected only one other person at the French hospital.

Where South Korea’s government did fall down, Kim says, was in risk communication. It initially refused to name the hospitals affected, which seems to have heightened public concern and suspicion. Christian Drosten, director of the Institute for Virology at the University of Bonn Medical Centre in Germany, says that since the problem was identified, the level of contact tracing and testing by health authorities has been “exceptional”.

MERS typically spreads in only hospitals (with some spread between close contacts in households), but much still remains to be learned about how that happens, says Kim. It is not known how much virus is shed by people infected with MERS but who show mild or no symptoms, for example. The South Korean outbreak is a reminder, he says, “that there are huge gaps in knowledge of the MERS coronavirus”.