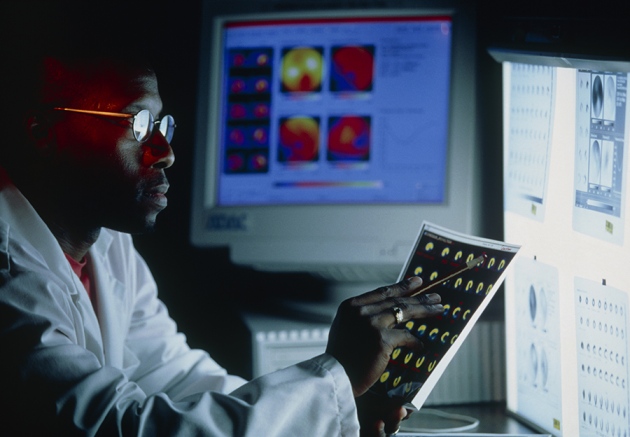 Will and Deni McIntyre/Science Photo Library

Technetium-99m is used as a tracer in some medical scans that monitor blood flow in the heart and brain.

Next month, Canada’s Chalk River nuclear-research reactor will halt production of a medical isotope that is widely used in diagnostic scans. Any unplanned outages at the world’s remaining production sites could lead to severe shortages of the radioactive tracer technetium-99m until new facilities come online in 2017 and 2018, the US National Academies of Sciences, Engineering and Medicine warns in a report released on 12 September.

Chalk River produces about 20% of the world’s supply of technetium; the rest comes from six other reactors in Europe, Australia and South Africa. Most of these reactors bombard highly enriched uranium (HEU) targets to produce molybdenum-99, which decays into technetium. Stockpiling the radioisotopes is impossible because of their short half-lives — 66 hours for molybdenum-99, and 6 hours for technetium-99m. As a result, supply disruptions can quickly translate into shortages at hospitals, as happened when two reactors shut down for repairs and maintenance in 2009.

“What we have is a period of vulnerability that could last into 2018,” says Kevin Crowley, senior director of the academies’ Nuclear and Radiation Studies Board. In the event of shortages, he says, doctors would be forced to delay medical procedures that rely on the isotopes or use alternative technologies. One of the most common medical uses for technetium-99m is single-photon-emission computed tomography (SPECT), which can be used to monitor blood flow in the heart and brain and scan bones for tumours.

Nonetheless, industry and governments have done a good job of coordinating international production and shipping of technetium since 2009, says Sally Schwarz, a nuclear pharmacist and co-director of the cyclotron facility at the Washington University School of Medicine in St Louis, Missouri. Schwarz is optimistic that any supply disruptions will be minimal. The medical community has learnt to economize its use of technetium, she notes, and physicians can use alternative diagnostic technologies in the event of isotope shortages.

In the meantime, facilities in Australia, South Africa and Europe are planning expansions next year that could make up most of the shortfall from the Chalk River closure. The European sites are also preparing to convert their reactors to use low-enriched uranium (LEU), which is thought to be less valuable to terrorists. Australia, which already uses LEU targets, is building a new facility to process molybdenum-99. Delays in any of these projects would increase the risk of shortages.

The Chalk River facility will stay open through March 2018, however, and could restart production before then on an emergency basis if an isotope shortage develops. The academies’ study says that US and Canadian governments must work to ensure that there is a viable plan to fire up its isotope production if needed.

By 2018, the United States could see the launch of domestic technetium production using new technologies for producing and processing molybdenum-99 — resulting in a possible glut that could pose new challenges for suppliers. “For the new domestic suppliers, the question is whether can they capture enough of the market to have a viable business plan,” Crowley says.

The academies’ report also raises concerns about efforts to eliminate the use of highly enriched uranium and secure the nuclear waste that is created during medical-isotope production. The United States currently provides the bulk of the world’s HEU targets but plans to halt shipments of highly enriched uranium by 2020. However, Russia has indicated that it may begin production of molybdenum-99 in the future, and has not yet committed to using LEU targets.

An earlier version of this story erroneously conflated the Australian OPAL reactor with older reactors in Europe and Canada. OPAL was only opened in 2007, and does not use highly enriched uranium targets. The text has been amended to reflect this.